The first time Saquon Barkley considered undergoing acupuncture, he was more than a bit squeamish.

He overcame his trepidation, though, and came away pleased with his first treatment. This was back in 2018, Barkley’s rookie year, and he has been a proponent of the traditional Chinese medicine ever since.

Blessed with a body that looks indestructible, Barkley has proven to be vulnerable ever since his outstanding Giants debut, when he was the NFL’s Offensive Rookie of the Year. That season, he was on the field for 83 percent of the team’s offensive snaps. Over the next three, his snap participation dropped to 68.3 percent in 2019, 6.6 percent in 2020 (when he tore his ACL in Week 2) and 46.6 percent in 2021. He has agonized over these absences and racked his brain trying to figure out why all the work he has put in did not lead to greater durability. 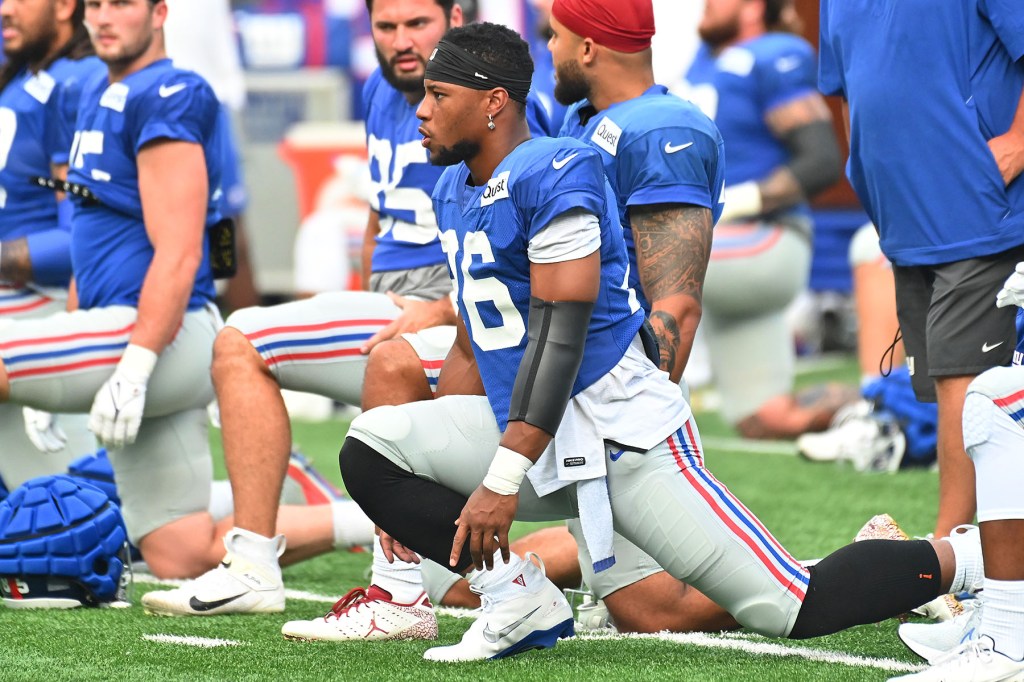 After playing in all 16 games as a rookie, Saquon Barkley has been in and out of the lineup due to injuries the past three seasons.Robert Sabo

Away from the Giants and their medical and training staff, Barkley pays massage therapists, his acupuncturist, trainers and physical therapists, all of whom comprise a health team he has employed to try to keep him hale and hearty. He is entering the final year of his contract, and his staying on the Giants roster into 2023 depends on his ability to stay on the field and produce.

“I put a lot of investment into my body, so hopefully it will all pay off,” Barkley said.

Part of that is embracing a practice he was told could fine-tune his body, but left him anxious at first.

“It is funny,” Barkley recalled. “Me and my acupuncture lady Jen, we laugh because the first time I ever did acupuncture, I was a baby. I didn’t want no needles going inside me. Now it’s like I’m so used to it, I’m numb to it.”

Acupuncture involves the insertion of tiny needles into the skin at strategic places in the body. It is used to treat pain, but also has proven to be beneficial to soothe muscles and relieve stress. Traditional Chinese medicine also holds that acupuncture can balance the flow of energy in the body. A more scientific view: Acupuncture can stimulate nerves and connective tissue. 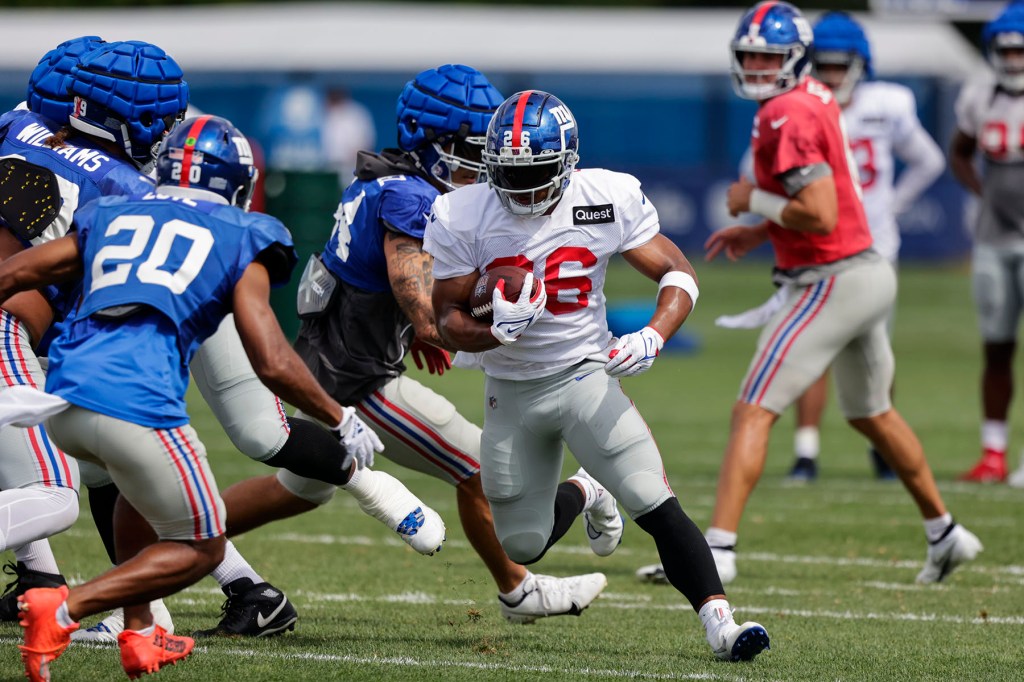 Healthy after an offseason of training and acupuncture treatments, Barkley has looked quick and durable in the first few weeks of training camp.Corey Sipkin

“It’s just specifically to the area of the body that you want,” Barkley said. “Sometimes, especially during camp. you’re going to have some soreness in places. Knee, ankle, you can do shoulders, you can do wherever. Some people get it in their foreheads. I don’t do all that crazy stuff.

“It doesn’t hurt. The needle is so small, you don’t feel it. But you psych yourself out in the beginning. Now I still [grimace] a little bit, but I’m numb to it. All depends on the week, the grind, the type of work I put in. I usually do it once or twice a week.”

Thus far this summer, Barkley has given the Giants reason to believe all of his efforts will keep him on the field. He has not missed any action in training camp, and he looks spry, prompting head coach Brian Daboll to describe Barkley as “explosive.”’ The 25-year-old appears thrilled to be grinding the days away in training camp, rather than watching from the side or having his workload restricted and evaluated on a day-to-day basis. On Sunday, he took a pounding in a practice session devoted to live run-blocking and rushing, yet emerged with nothing but routine soreness. A day later, Barkley looked especially frisky as he leveled cornerback Aaron Robinson, setting in motion some hostile vibes that led to the most heated scuffle of camp.

The Giants hope this season, at long last, Barkley will be able to withstand the physical grind, with the help of all of his  away-from-the facility regimens, even those rooted in ancient medicine. 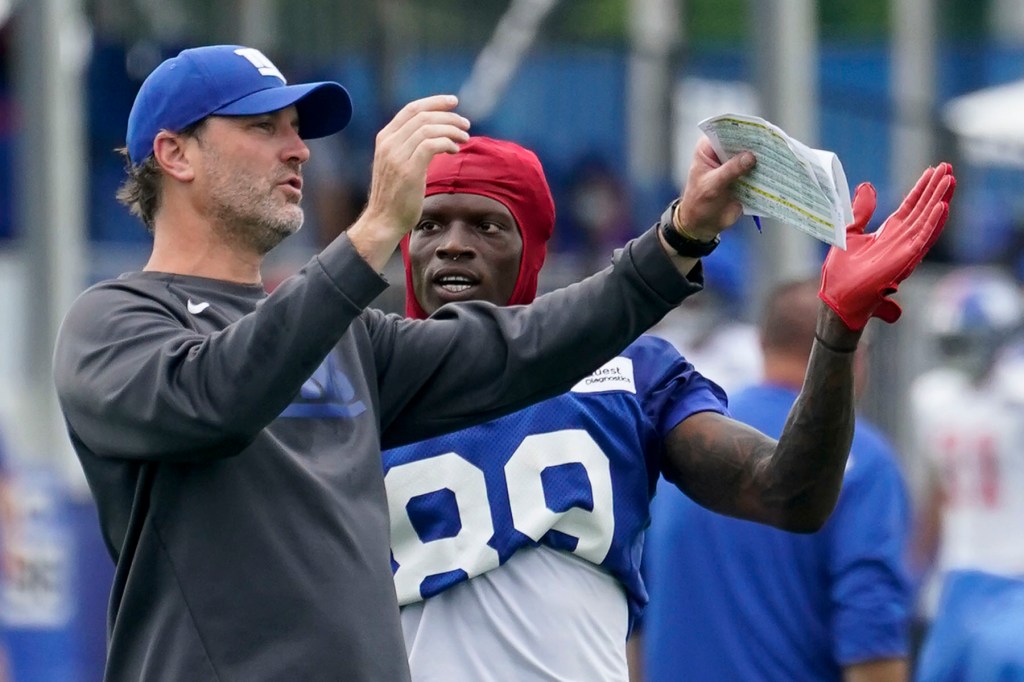 Assistant coaches are not made available for interviews often, but when they are, they most usually offer a wealth of information. Such was the case when The Post got a chance to speak with Mike Groh, the Giants’ wide receivers coach, who was asked to expand on the revelation from many of his players that this new offense, designed by Daboll, allows the receivers far more freedom than what was taught in the past with the previous coaching staff.

“I can’t,” Groh said Tuesday, “because I don’t know what that means.

“I feel like [the notion that receivers have more freedom has] gotten overblown. This is a very successful system that’s proven in the NFL. We have option routes in this offense, just like every other team in the NFL. We’re not doing something here that Dabes has never done before or any of these guys have ever been asked to do if they’ve been in another system, in terms of option routes and being able to work off leverage of defenders.”

Hmm. Was it not just the other day when several Giants receivers who were with the team in 2021 were reveling in what they described as a brand-new approach? Darius Slayton said, “Some systems want you to run a straight line and stop at 10 yards — and that’s what you have to do,” stressing that is not the case with this new offense.

It is true that every NFL offense has some option routes, allowing the receiver to adjust, or convert, his route depending on the coverage presented by the opposing defense. It is also true that the system put in place by Jason Garrett the past two years was more structured, in terms of rules for the wide receivers.

Daboll’s system, in contrast, is heavy on pre-snap motion, asking the quarterback and receiver to read the play and react to it in concert with each other. So while there is more freedom for the receivers, Groh has a point in that the system is not a free-for-all. 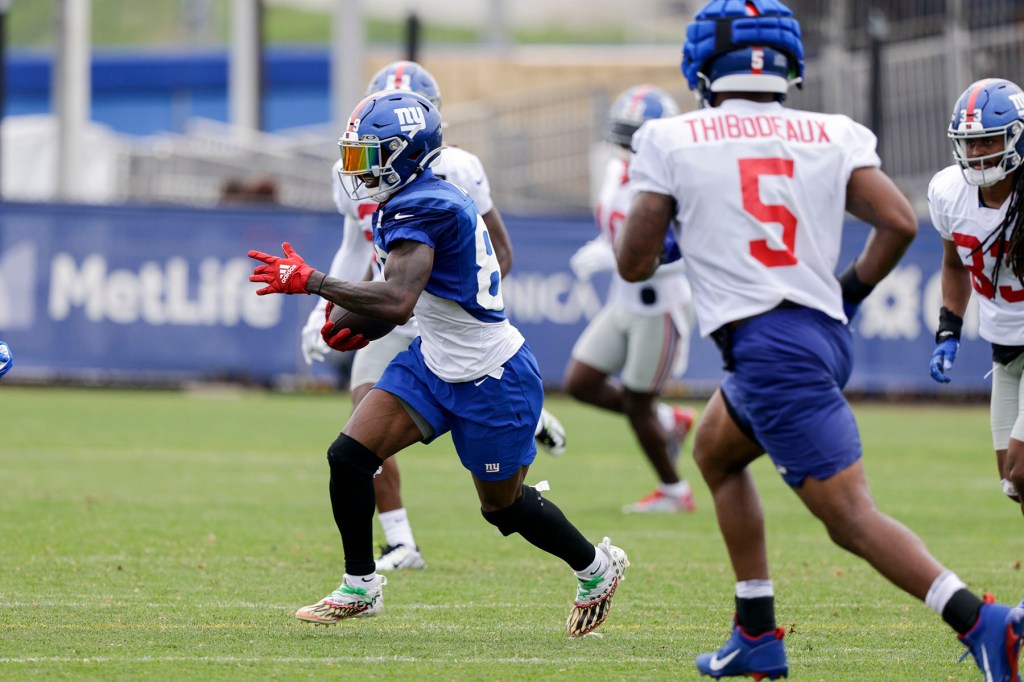 Kadarius Toney and his fellow Giants receivers are getting used to the “option routes” in Brian Daboll’s offense.Corey Sipkin

Kadarius Toney described the differences he’s noticed: “You don’t have to run the pen-and-paper version of your route. It’s not set in stone, like, no matter which way the cornerback is playing you have to run that route.”

“I wouldn’t necessarily agree with that,” Groh said. “This is a system, you’ve seen this system in action, had a lot of success in Buffalo and other places. We have some freedom on option routes and things like that, but we’re gonna work off leverage of defenders. We try to give these guys tools to win versus man coverage, and maybe that might be what they’re speaking of, in terms of having available tools in their toolbox to help them win and get open and separate.

“There are specific calls within the framework of the offense that would allow or facilitate option routes.”

So, to hear Groh tell it, perhaps not quite the rampant freedom many of the players would have us believe.

Here are two questions that have come up recently that we will attempt to answer as accurately as possible:

Mike Kafka, the new offensive coordinator, said he believes there is a “correlation” between having success as a coordinator and a play-caller and being a former quarterback “because as a quarterback, you’re playing the game kind of the same way through the eyes of a coordinator.” Is there any validity to this? 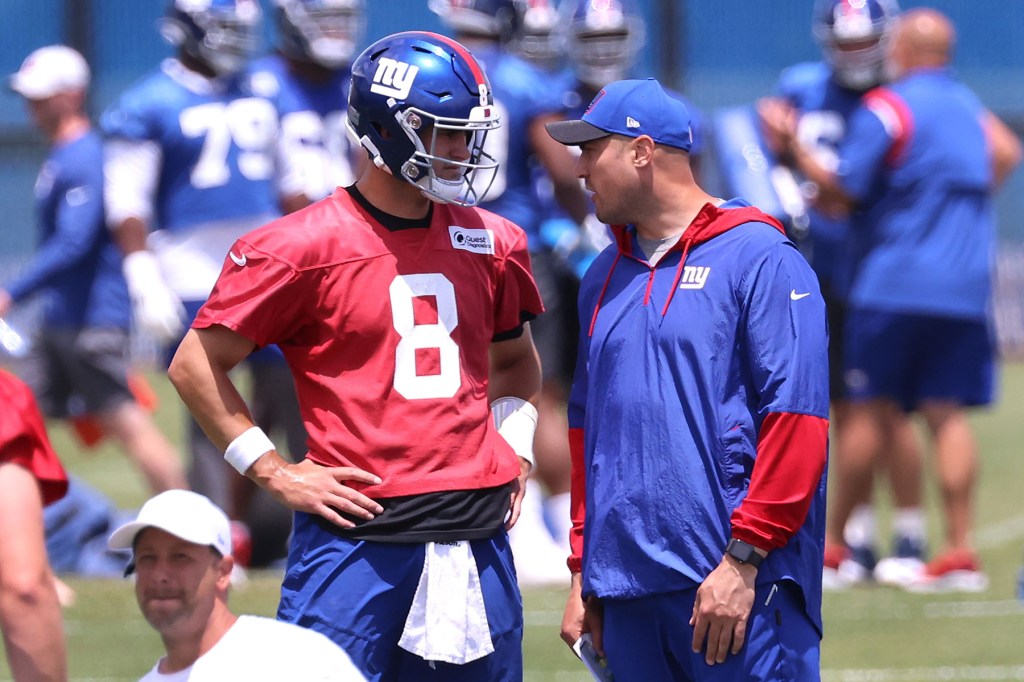 Mike Kafka’s experience playing quarterback at Northwestern and briefly in the NFL could be a valuable resource for Daniel Jones.Charles Wenzelberg/New York Post

It seems as if every few days we hear about workouts going on behind closed doors inside the team field house. What goes on in these workouts? 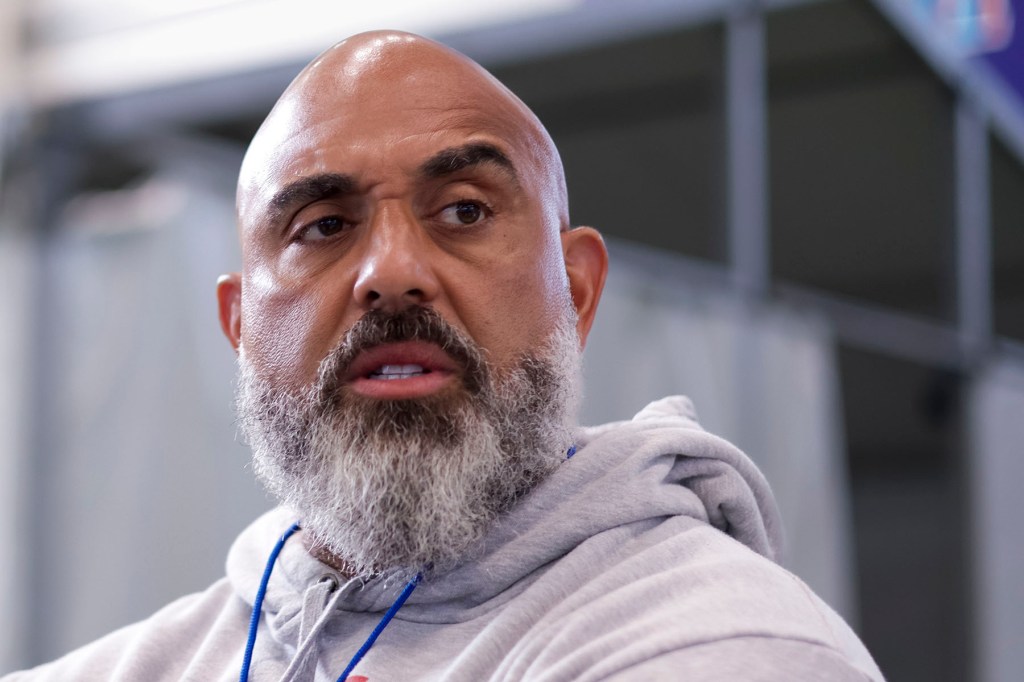 Bobby Johnson has been busy getting to know and coach the Giants’ current offensive linemen while also helping the team mine for more talent.Corey Sipkin

The roster is never set. Ever. The front office needs information on as many players as possible, and sometimes that is all that is going on with these workouts. Bring in a handful of guys for updated medical evaluations to have the most up-to-date data in the team files. Often the workout is specific in nature. If the Giants are especially thin on the offensive line — as has been the case recently — they will invite several offensive linemen for a workout/tryout. Members of the front office and Bobby Johnson, the offensive line coach, will take a look-see. This past Monday, the Giants did just that in working out Vadal Alexander and Brayden Patton, two offensive linemen who played for the Pittsburgh Maulers in the USFL. A similar pattern is followed with every position group. When the position of safety was depleted, Andrew Adams, a former Giants player, came in on a Monday and was signed a day later. That same Monday, veteran tight end Eric Ebron was also in the field house for a tryout. He was not signed, but the Giants gleaned valuable information on him.