Who is Rhaenyra’s baby-daddy Harwin Strong on ‘House of the Dragon’? As Jon Snow knows, bastards were a big deal on “Game of Thrones.” But the prequel series “House of the Dragon” hasn’t really gone out of its way to acknowledge their existence — until now.

SPOILER ALERT: Contains details from Episode 6 of “House of the Dragon,” airing Sunday, Sept. 25, on HBO and HBO Max.

Episode 6 of “House of the Dragon” introduces a dramatic 10-year time jump. After a decade, expect a lot of changes: For starters, Princess Rhaenyra and Queen Alicent are portrayed by new actresses; the former is now played by Emma D’Arcy instead of Milly Alcock; the latter by Olivia Cooke instead of Emily Carey.

Alicent’s kids, who we last saw as babies and toddlers, are now bratty teenagers. Rhaenyra is now the mom of three sons. She’s still married to Laenor, who’s gay (and is also played by a new actor, John MacMillan). And since the spouses have an open relationship, Rhaenyra’s got a new side guy. Forget about her ill-fated dalliance with Criston Cole (Fabien Frankel) or her creepy incest with her Uncle Daemon (Matt Smith). Her (temporary) new secret swordsman is Harwin Strong. 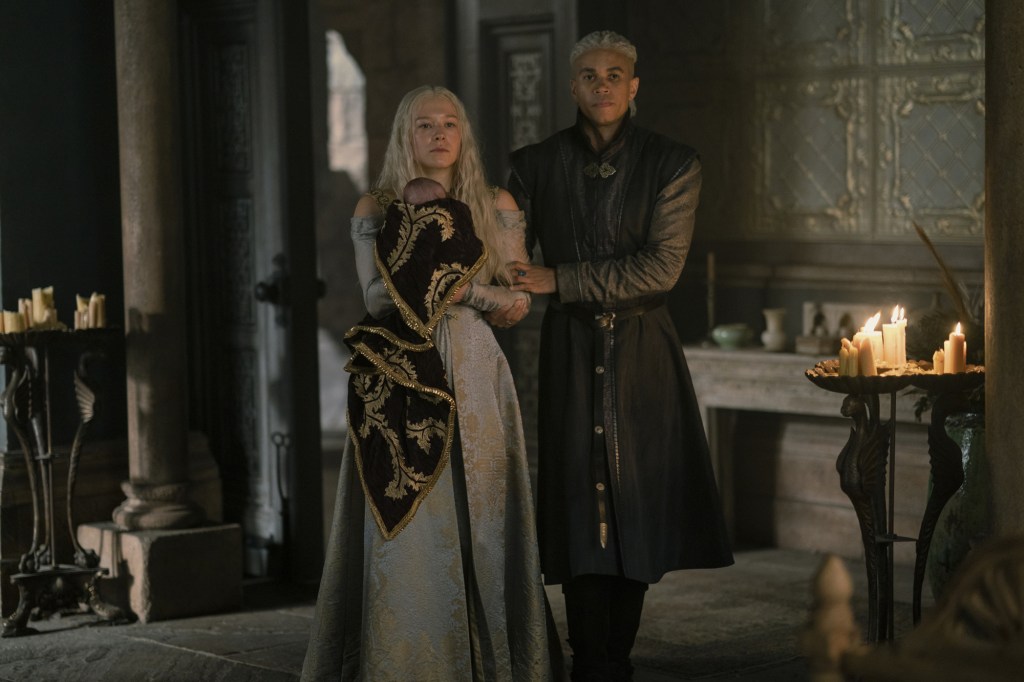 So, who is Harwin Strong? And why is it important that there are rumors that Rhaenyra’s sons with him are bastards? Prepare for spoilers galore.

Harwin Strong (played by 33-year-old Australian Ryan Corr) is a knight who has the very metal nickname of “Breakbones.” He’s the leader of the City Watch (the law enforcement in King’s Landing). His dad is Lyonel Strong, who became the Hand of the King after monarch Viserys fired Otto Hightower from that role in Episode 4.

Harwin has been in the background of the show, until now — in the third episode, when Rhaenyra returned to the camp covered in blood from the wild boar she stabbed, Harwin was the only man to give her an approving look while everyone else looked horrified. Then, in last week’s fifth episode featuring Rhaenyra and Laenor’s disastrous wedding, he danced with Rhaenrya (before Daemon cut in). Later, when Criston Cole went psycho, and the party dissolved into chaos, Harwin grabbed Rhaenyra and prevented her from getting trampled in the crowd.

Now, in Episode 6, he’s the biological father of her sons.

Fans of the George R.R. Martin book “Fire & Blood,” on which the show is based, were already crushing on Harwin despite his minimal screen time in previous episodes, because they knew his more significant role as the father of Rhaenyra’s kids was coming.

Alicent and Rhaenyra have a passive-aggressive interaction right after Rhaenyra gives birth to her third son, where it’s clear that the former friends’ relationship has soured and Alicent is suspicious that Laenor isn’t the father of Rhaenyra’s kids.

Later, Alicent tries to convince King Viserys that his daughter Rhaenyra birthing bastard kids is an “affront” to the throne. Viserys is dismissive. Even Daemon, who’s living abroad with his wife Laena (Laenor’s sister), is aware of this information. When he hears that Rhaenyra had a new baby, Daemon asks if the child has “an entirely coincidental resemblance to the leader of the City Watch.” 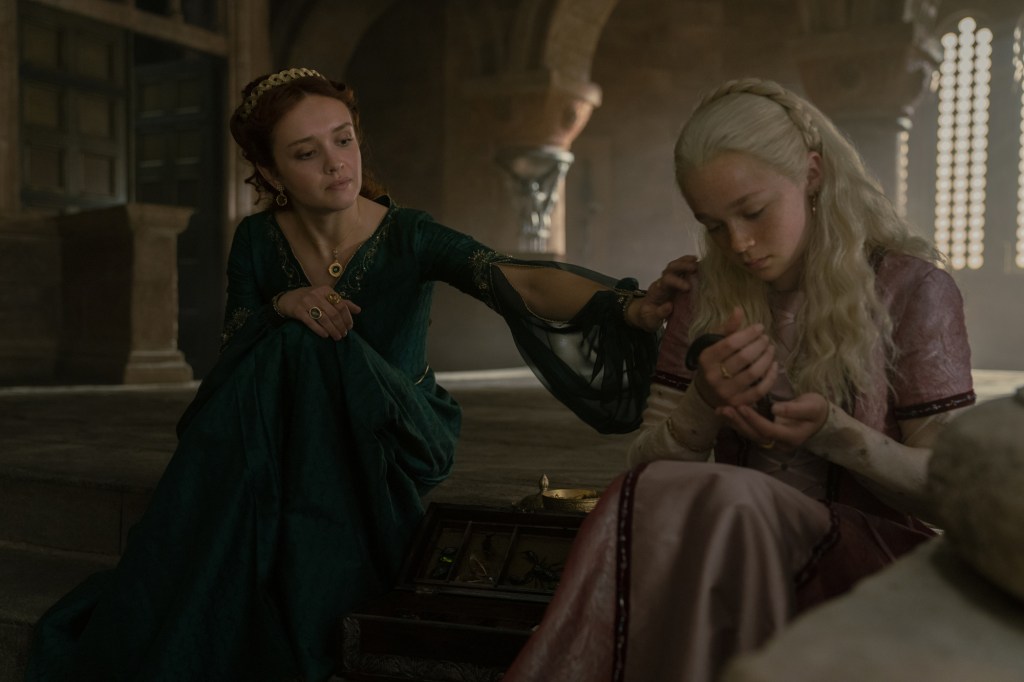 Alicent (Olivia Cooke) with her daughter Helaena (Evie Allen) on “House of the Dragon.”

The intrigue and gossip about Rhaenyra’s baby-daddy all comes to a head when Rhaenyra’s kids and Alicent’s are practicing sword-fighting together.

Criston Cole, who somehow escaped punishment for brutally murdering an innocent man in public in the last episode, is instructing the children in sword fighting. But he’s blatantly favoring Alicent’s kids.

Harwin gets angry about this, which leads to Criston baiting him about why he cares so much about Rhaenyra’s kids. So, Harwin punches Criston. Harwin is then reprimanded by his dad, since this incident has drawn attention to the Rhaenyra-related rumors.

As his father explains, Harwin having kids with the married princess is “treachery” and could mean “exile and death” for them all. 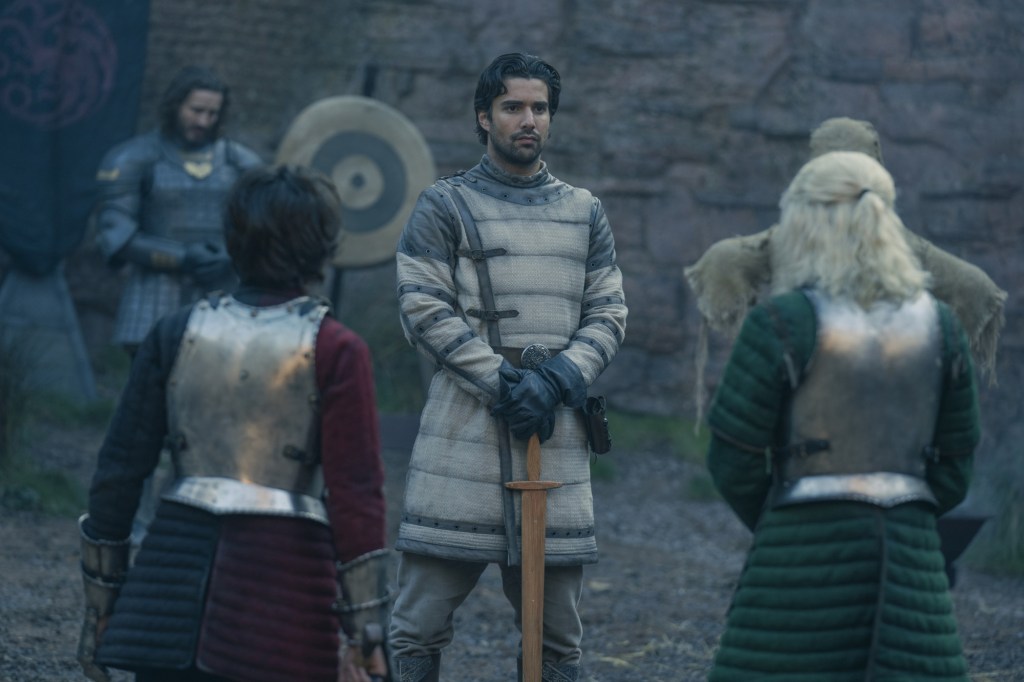 So, Rhaenyra having kids with someone who isn’t her husband Laenor isn’t just a fun scandal. It has potentially deadly consequences for them all. And needless to say, the rumors about it aren’t good for her aspirations to be queen.

This incident with Harwin fighting Criston leads to Harwin leaving court. A worried Rhaenrya decides that her own family should leave, too, since the whispers about her kids being Strong bastards have made her a “spectacle.”

By the end of the hour, Harwin and his dad are both dead (killed in a fire, set by assassins sent by Harwin’s own treacherous brother, Larys Strong).

Gooydbye, then, Harwin, we barely knew you. Literally! Right as we’re adjusting to this new status quo of his relationship with Rhaenyra, he’s gone.

Still, Harwin’s legacy will live on, in his three sons with Rhaenyra. And since they’re in line for the Iron Throne, the fact that they’re bastards will be important going forward. It might just make it harder for Rhaenyra to convince everyone that she’s the right person to succeed her father to the throne, instead of her annoying teen half-brother Aegon. ‘House of the Dragon’ just revealed the show’s...