ATLANTA — Jeff McNeil’s pursuit of Mets history remains an interesting subplot in these final days of the regular season.

The Mets utilityman increased his batting average to .323 by going 2-for-4 in the Mets’ 4-2 loss to the Braves at Truist Park on Saturday night. McNeil trails only Freddie Freeman, who entered Saturday at .327, for the major league lead. But Freeman also plays in the National League, leaving the Dodgers’ first baseman as a sizable roadblock to McNeil’s pursuit of a batting title.

Jose Reyes, who won the batting title in 2011, is the only Met to accomplish the feat. Reyes hit .337 that year, securing the title on the final day of the regular season.

Before the game Saturday, Mets manager Buck Showalter was asked what stood out to him about McNeil’s season at the plate. Showalter pointed to the fact McNeil was hitting .312 against lefties. 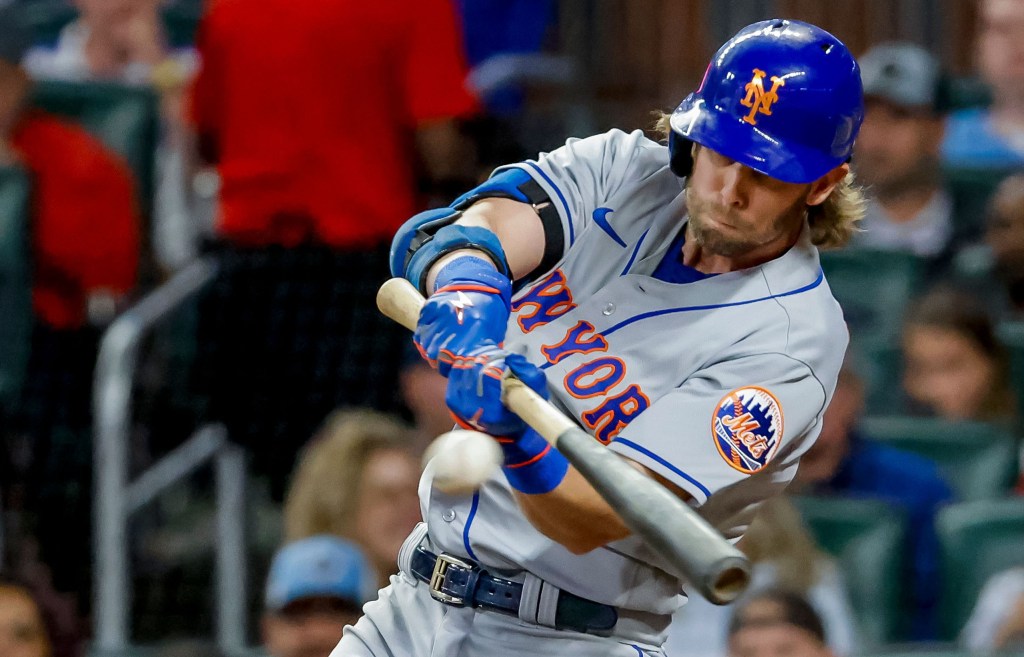 Jeff McNeil rips an RBI single during the fifth inning of the Mets’ 4-2 loss to the Braves.EPA

“In order to be a left-handed hitter and have a chance to win a batting title, you have to be good against left-handed pitching,” Showalter said. “He’s been a utility player for me from the standpoint I can hit him anywhere in the batting order and that is unusual. It’s really helped our batting order present challenges to the bullpens other teams have because being able to move him around really creates some stress on some bullpens.”

Freeman will finish his season with four games in Los Angeles against a dismal Rockies pitching staff. McNeil’s challenge includes one final game against the Braves on Sunday before facing the dilapidated Nationals in a series to conclude the regular season.

Francisco Alvarez worked with catching instructor Glenn Sherlock in the bullpen before the game and attempted to acquaint himself with the PitchCom device used to deliver signs to pitchers. Though Alvarez was promoted from Triple-A Syracuse on Friday for his right-handed bat, Showalter said he could receive action behind the plate.

Alvarez went 0-for-2 Saturday after entering the game as a pinch-hitter. He is hitless in six at-bats to begin his MLB career.

Jacob deGrom said he doesn’t have any concerns about taking his next potential turn in the rotation on Wednesday. DeGrom left his start Friday after six innings because of concern over a blood blister. He said the finger became most aggravated when he threw his slider.

“This will be fine,” deGrom told The Post, motioning toward his right middle finger.

where mcneil stands batting
Read The Rest at
nypost.com Bears bring one true star with them vs. Giants,...