The Padres have transformed into among the most aggressive organizations in the majors. Under A.J. Preller, they have become a high-payroll, star-driven team unafraid to expend prospects to acquire what they want at a time when most franchises hoard their best farmhands as if they are all winning lottery tickets.

That philosophy did not lead to even a .500 record, much less a playoff spot in 2021, when San Diego arguably was the majors’ most disappointing team. This year the Padres never received an at-bat from last season’s NL MVP third-place finisher, Fernando Tatis Jr. He suffered a fracture in his right wrist likely incurred from an offseason motorcycle accident and — on the brink of returning — he was suspended in August when he tested positive for an anabolic steroid.

By then, though, this version of the Padres had made one of the biggest trades in history, pretty much emptying the best of their system to obtain Juan Soto — and Josh Bell — a day after obtaining Josh Hader. This time the star-power led San Diego to its first playoff berth in a 162-game season since 2006. And this kind of star power makes them particularly dangerous in a short series. With the help of a scout, a coach and an executive with a lot of experience studying the Padres, let’s drill down on the challenge the Mets are facing over the weekend at Citi Field:

Are we sure Max Scherzer and Jacob deGrom give the Mets the best starting combo in this series? We are not talking historically. But right now. The Mets were 10-10 in games started by their duo from when deGrom came off the injured list on Aug. 2 and neither rose to the challenge last weekend in Atlanta.

Meanwhile, Game 1 starter Yu Darvish and Blake Snell have been excelling. Darvish has not pitched fewer than six innings since May 13. Beginning on June 7 when Darvish shut out the Mets over seven innings, the righty over 20 starts has a 2.68 ERA, a .197 batting average against and a 149-to-22 strikeout-to-walk ratio. That stretch includes another seven-inning outing, in which he allowed one run, against the Mets. The scout described Darvish as “the most talented nibbler in the world.”

This has long been the criticism of Darvish — that he has especially an elite fastball (even at 36, he averaged 95 mph this year, tied for 11th among qualifiers), but pitches as if he never wants the bat to hit the ball. So he uses his wide assortment of pitches to try to deceive.

“It is not a comfortable at-bat,” the coach said. “The hitters know he has great stuff. Because he will not deviate from working the edges, the key is to get his pitch count up and maybe get him out of the game an inning or two earlier. But he is not wild [eighth-lowest walk percentage at 4.8 percent]. He has become very cutter-reliant [35.3 percent] and it is a good pitch. But I will never stop believing he should use his four-seamer more.” 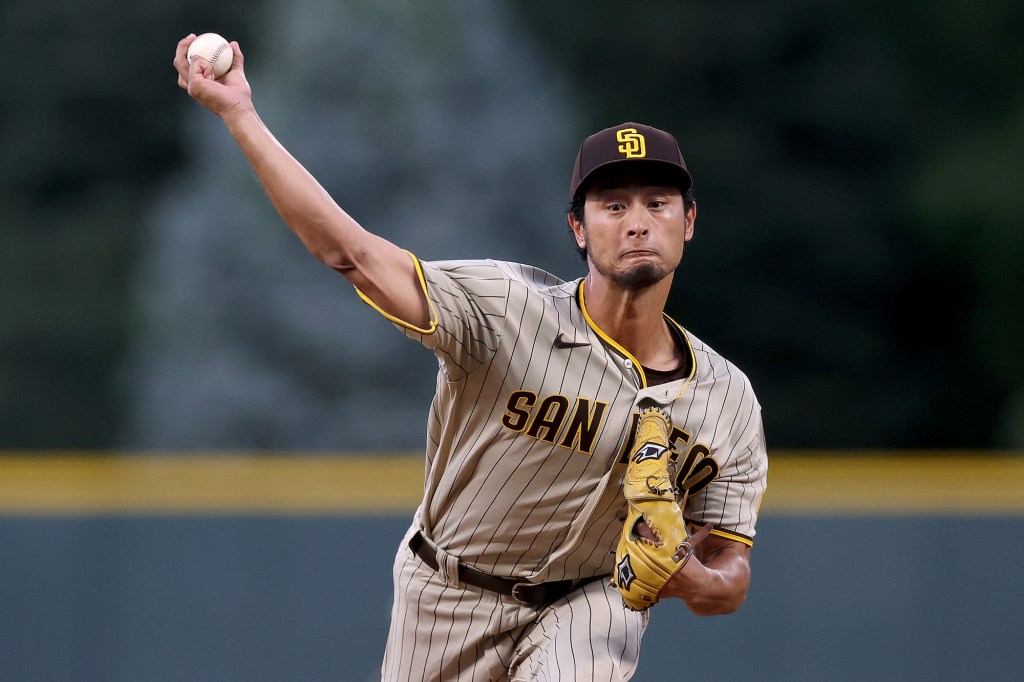 Snell shut out the Mets over five innings on July 23. That began a 14-start, season-closing spree in which he had a 2.19 ERA, a .209 batting average and a 105-to-20 strikeout-to-walk ratio over 78 innings. Snell as a Ray was famously pulled from World Series Game 6 in 2020, though he was dominating the Dodgers, because Tampa Bay stuck to its belief not to expose him to a lineup for a third time. Los Angeles immediately rallied after Snell’s exit to clinch the title.

San Diego has been more open-minded with Snell, who went seven innings twice in his final four starts, a period when he had a 0.72 ERA and .411 OPS against. “They are letting Snell go and I can see why — he is holding his stuff into the sixth and seventh innings,” the scout said. “The velocity is still there, the command, the confidence, he’s still landing that breaking ball.”

The executive said, “He averages 96 [mph] with his fastball and 90 with his slider. When that slider is on, he’s among the toughest pitchers to hit in the majors.”

Throw it hard … and over the plate

The scout said this about the Padres’ offensive approach: “The theme of the team, it feels to me, is that they are trying to walk. When we play them, it feels all their big innings are built on walks.”

The numbers don’t lie. No team drew five walks in a game more often than San Diego’s 55, and they were 40-15 in those games — the .733 winning percentage the fifth-best when drawing that many in a game. 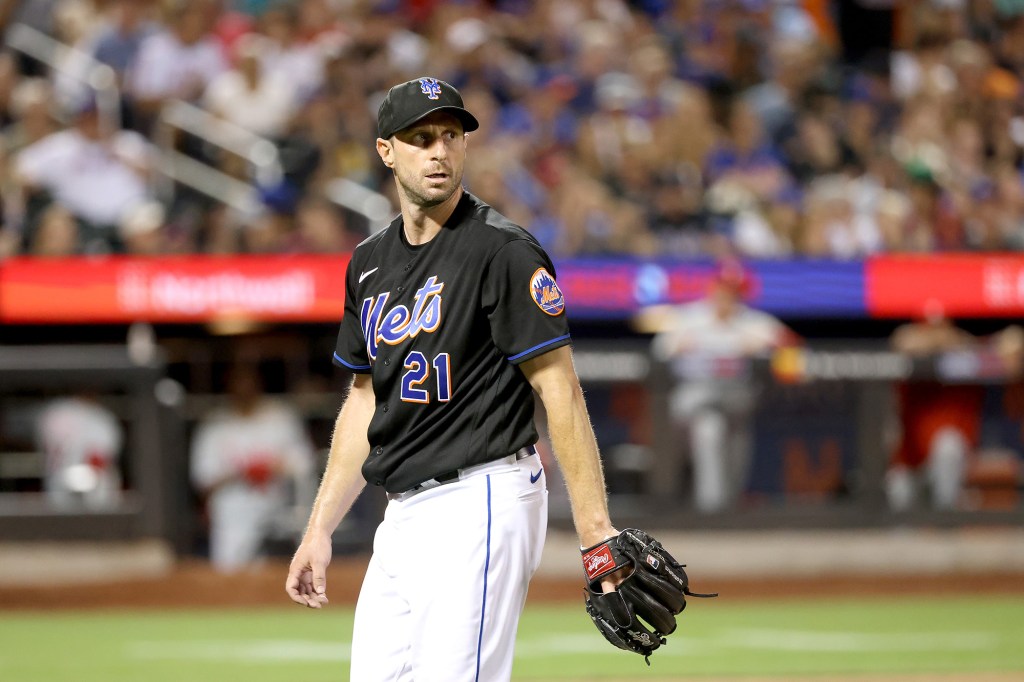 Mets pitcher Max Scherzer during a game against the Phillies on Aug. 12, 2022.Charles Wenzelberg/New York Post

This was their style even with Luke Voit. It is particularly so since Voit was part of the trade that brought Bell and Soto. The major league walk rate is 8.2 percent. The Padres have nine regularly used hitters above that. Soto led the majors at 20.4, 19.3 since joining the Padres.

One of the keys to the series is keeping leadoff man Jurickson Profar off base in front of Soto and Manny Machado. That means not walking him. Profar hit .243, but walked 11.1 percent of the time (19th best among qualifiers).

Overall as a team, the Padres are good at not chasing pitches out of the strike zone. The coach said in a text with multiple exclamation points: “Attack the zone!!!!”

One way to do this is to be able to throw hard. The Padres’ .636 OPS against pitches 95 mph and harder was 28th in the majors. So, obviously the Mets’ key trinity of Scherzer, deGrom and Edwin Diaz fits into this. But could hard-throwing relievers such as Trevor May and Drew Smith have value in this series?

They never got the big three of Machado, Soto and Tatis. But a lineup that has Soto hitting second behind Profar followed by Machado has a powerhouse No. 2-3 in the lineup.

Since the cleanup hitter vs. the Mets righty rotation is likely to be Jake Cronenworth or perhaps Bell, then the ability to force the rest of a lineup that is just meh to beat them is key. But our panel of three was unanimous about if it comes down to Machado vs. Soto, with the coach synthesizing for the group: “Don’t let Machado beat you.” 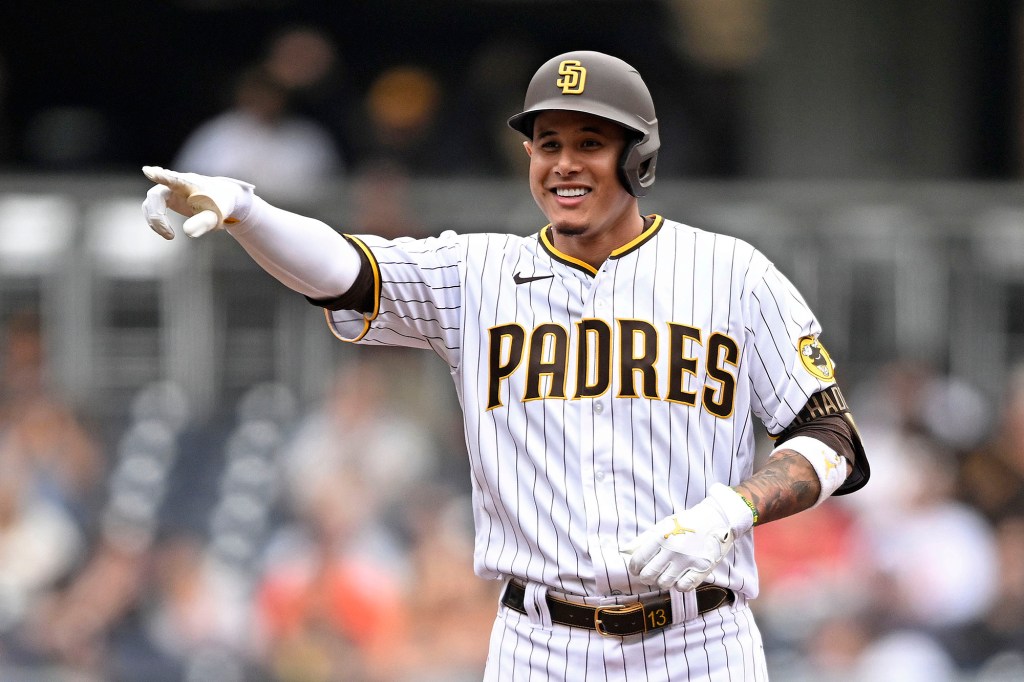 Manny Machado points to the Padres dugout during a game against the Giants on Oct. 5, 2022.Getty Images

That is because this Soto has not been the Soto of 2019-21 with the Nationals, especially since being traded Aug. 2 to the Padres. He hit .236 with a .778 OPS for San Diego, though still with 44 walks and 34 strikeouts — he just doesn’t chase much. Did he get into bad habits playing with a terrible Nationals club? Did he feel pressure to justify rejecting a 15-year, $440 million extension, which led to Washington trading him to San Diego?

It is a dangerous game to assume he will not rise to the moment. In the 2019 postseason, Soto hit five homers with a .927 OPS in 17 games to help the Nationals win the championship. He won the Home Run Derby in July with everyone knowing he was just days away from being traded.

There is perhaps no rule change that Buck Showalter has disliked more than the mandatory three-batter rule for relievers. He has mentioned often that, among other items, since you can’t just have a lefty reliever face a lefty batter, that lefty relievers better be at least competent against righties, too.

Unless Mets starters can hand off directly to Diaz, this series is going to force Showalter into pondering the situation he loathes. Soto has a .942 OPS vs. righties, but .701 vs. lefties. So you will want to bring in a lefty reliever to face him, and the Mets duo of David Peterson and Joely Rodriguez have held Soto (small sample size alert) to 1-for-9, though with four walks. The coach liked lefty-on-lefty change-ups against Soto if you can keep it down (can Rodriguez?) and the kind of two-strike slider Peterson can offer. But Soto even left-on-left forces pitchers to throw strikes, and Rodriguez and Peterson can battle command. 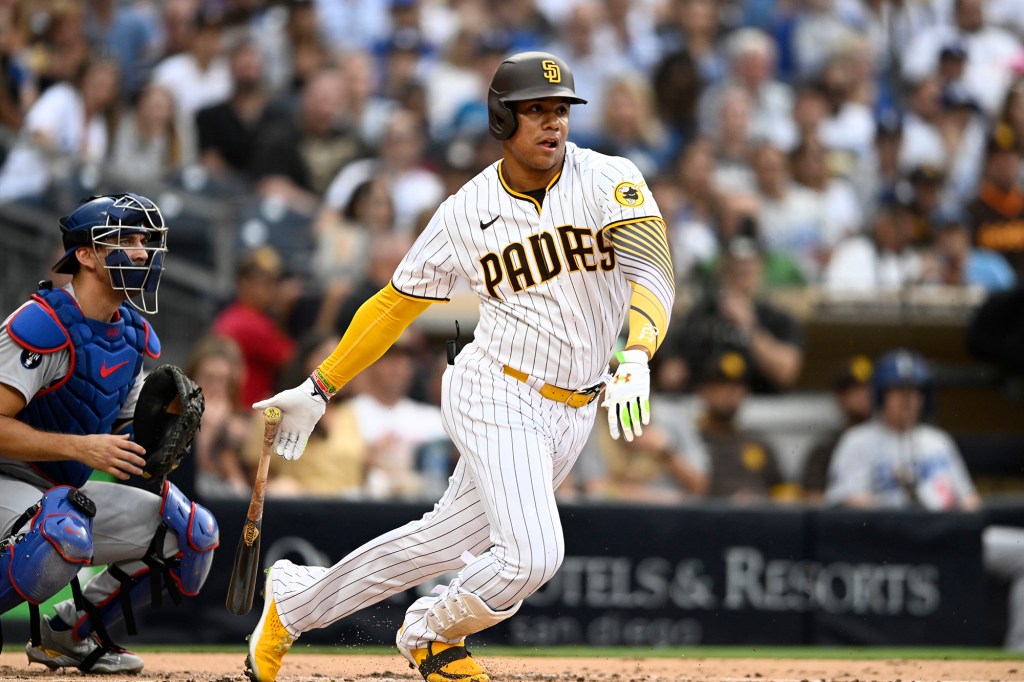 But the problem is if you have to leave in the lefty by rule. Machado has an .855 OPS vs. southpaws and his 12 homers tie him for fifth in the majors (with teammate Brandon Drury). If Machado is leading off a late inning, you can imagine that Showalter would go to Adam Ottavino, who has held righties to a .161 batting average and .479 OPS this year and in his career has held Machado hitless in eight at-bats with three strikeouts. But can Ottavino be trusted against Soto, who he has never faced? Lefties beat up the righty with a .301 average and .838 OPS this year.

Seth Lugo has filled in as the righty that Showalter trusts most against lefties in the set-up corp (Soto is 3-for-10 with a homer and four walks vs. Lugo, though). You can expect to see Diaz in the eighth, especially if Soto and Machado are due up (Soto is 2-for-8 against Diaz, both hits are homers).

The inability of Brandon Nimmo to grow into an able base stealer and especially the likely absence of Starling Marte for this series is a killer for the Mets, because the Padres are terrible at stopping the running game. They threw out just 16 percent of baserunners this season — 6 percent worse than any team.

Throwing is not a strength of San Diego catchers Jorge Alfaro, Luis Campusano and Austin Nola. Runners were 32 out of 38 in steal attempts against the Padres scheduled three starters for this series — Darvish, Snell and Joe Musgrove (12 out of 14 vs. Darvish).

Francisco Lindor has to get on base and use his legs and Terrance Gore becomes even more of a weapon in the late games.

Conversely, San Diego hardly uses the steal (49 successes were second fewest in the NL). Shortstop Ha-Seong Kim is the main threat (12 steals), but Machado will take a bag if opponents don’t pay attention (9 out of 10 on steals).

Hader opened this season looking as if he would have the season that Diaz ultimately did. The lefty did not allow a run in his first 19 outings ,and through June, Hader had a 1.09 ERA, .119 batting average against and had struck out 41 of the 91 hitters he had faced as the Brewers closer.

However, Hader was shakier for Milwaukee after that, was traded to the Padres on Aug. 1 and instantly crumbled, allowing 12 runs in his first seven outings with seven walks and eight strikeouts. He lost his closing role temporarily. But he regained the position over his final 12 outings with a 0.79 ERA and a .128 batting average against, but not quite the strikeout dominance of his heights (14 of 41 batters).

The scout said late in the season Hader’s velocity and command returned — notably his fastball at the top of the zone and ability to get his slider to the back foot of righty hitters. In that period in which Hader got his act back together, he faced 15 lefty hitters, who went 1-for-13 (a single), with two walks and seven strikeouts. You want as many righty hitters against him as possible.

This was supposed to be Darin Ruf’s late-inning pinch-hit role. He only faced Hader twice, but walked and homered. Do the Mets trust Francisco Alvarez to take this kind of at-bat?

should worry about padres exploit
Read The Rest at
nypost.com WWE announcer shakeup: Every move including...