‘West Side Story’: Read The Screenplay For Steven Spielberg And Tony Kushner’s Take On Iconic Musical Editors note: Deadline’s Read the Screenplay series debuts and celebrates the scripts of films that will be factors in this year’s
movie awards race.

“I believe that great stories should be told over and over again, in part to reflect different perspectives and moments in time into the work,” Steven Spielberg says of his motivations to craft a new take on the beloved classic musical West Side Story that was both reverent to the original 1957 Broadway production and the subsequent Oscar-winning 1961 film and filled with fresh, relevant inspiration.

“It’s very intimidating to take a masterpiece and make it through different eyes and different sensibilities without compromising the integrity of what is generally considered the greatest music ever written for the theater,” Spielberg added of the intent to honor the source material developed by stage director and choreographer Jerome Robbins, composer Leonard Bernstein, lyricist Stephen Sondheim and playwright Arthur Laurents (and later filmmaker Robert Wise) – all inspired, of course, by the framework of Romeo and Juliet, Shakespeare’s eternally enduring tragedy about star-crossed young lovers. “But we also knew we had to make a movie for our times and make it with a contemporary understanding and with contemporary values that we subscribe to.”

Spielberg turned to his screenwriting collaborator, Tony and Pulitzer Prize winner Tony Kushner (Angels In America), to subtly reframe the story. Having previously worked with Spielberg on Munich and Lincoln, Kushner was keenly familiar with his friend’s desire to re-examine the musical, which Kushner himself had long worshipped.

“I was moved by how many of our current struggles Steven felt could be explored in this 60-year-old masterpiece – I guess moved and troubled, in a good way, because the racism, xenophobia, the legacies of colonialism, the effects of poverty, the evils that catalyzed the creation of the musical, are still very much with us,” says Kushner.

“Steven felt the time was right to take a new look at West Side Story, and he’s always been remarkably attuned to the zeitgeist,” he adds. “The story is both big and political, yet at its heart it’s as private and personal as can be, two young people who fall fiercely in love; but the love that blossoms between them is murdered by the big political world surrounding them.”

“The story is a warning: racism and nativism and poverty are democracy’s antitheses and if not resisted and rejected, they will atomize the bonds that hold us together as a society,” says Kushner. “Love, as they say, is the answer, love can transform the world, it can transform malevolent reality, but love doesn’t conquer all, or at least not all threats in the immediate moment. In a context of hatred, love is in danger. And that is tragic, that’s the tragedy of West Side Story.”

One of Kushner’s key alterations was substituting the druggist Doc with an original character: his widow Valentina, an elderly Latina who knows all too well the challenges and pains of mixed-heritage romance. The role was specifically crafted for veteran star Rita Moreno, who’d won the Best Supporting Actress Oscar for playing Anita in the 1961 version and also served as an executive producer on the new film.

“Valentina’s backstory is 25 pages long,” notes Kushner. “It’s like a little novel, starting with her early life in Puerto Rico, and it includes how Tony came to live in the basement of her drugstore. It spans the first half of the 20th century. While I was writing it, I fantasized that I was watching an epic miniseries starring Rita Moreno.”

Keeping the 1957 setting, Kushner also built in details derived from real-world historical precedent: in the early 1950s New York City, a stretch of adjoining Upper West Side neighborhoods, Lincoln Square and San Juan Hill were razed to pave the way for the construction of ambitious projects including Lincoln Center for the Performing Arts and Fordham University, uprooting and displacing both the longer-standing European and relatively newer Latino immigrant communities living there and creating, says Kushner, the new film’s urban backdrop, “a vast wasteland of rubble, demolished and partially demolished tenements, crisscrossed by streets, all the way to the Hudson River.”

“There’s a rich and important history of that community which we wanted to incorporate in our version of the musical,” explains Spielberg. “The characters say and do things in our West Side Story they didn’t say or do on stage or in the 1961 film, and much of that difference came from our determination to explore the story, its historical context.”

“This is Romeo and Juliet, but it’s also a very relevant allegory for what’s happening along our borders and for the systems in this country that reject anyone who isn’t white,” adds Spielberg. “What is so wonderful about this story is that, no matter how much the world around us changes, the lessons and insights it offers us do not. It’s a story that has captivated audiences for decades because it is not just a love story, but also a culturally significant work with a central premise – that love transcends prejudice and intolerance – that hasn’t lost its relevance over time.”

Click below to read Kushner’s script for the 20th Century Studios pic, which stars Rachel Zegler, Ariana DeBose and Ansel Elgort and hit theaters in early December. It has grossed $57.9 million at the global box office, along the way picking up 11 Critics Choice nominations including Best Picture. It has also scored Best Picture wins at the Golden Globes and been named one of the year’s best films by AFI and the National Board of Review. 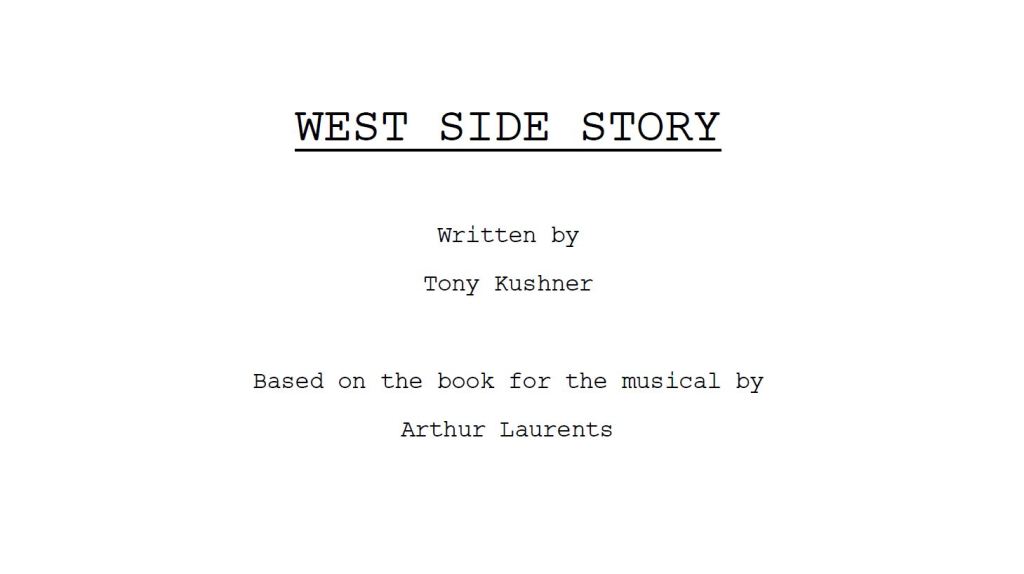