There was still two hours until first pitch. Eduardo Escobar wouldn’t connect on his game-winning walk-off single for another five hours.

As the gates at Citi Field opened, the race to the best spots in left field for batting practice began. At the front of the pack was Zack Hample, MLB’s most famous ballhawk and collector.

Amid recent controversy and renewed negative attention, Hample attended the Mets’ 5-4 extra-inning win over the Marlins last Wednesday with The Post for the full experience around his much-maligned feats. It happened to be the anniversary of his personal favorite all-time catch, 14 years after he snagged the last Mets home run at Shea Stadium – a Carlos Beltran two-run blast in a 4-2 Mets loss in 2008.

“I just love baseball so much, and in general, I love any opportunity to play a game within the game,” Hample said, an ever-present sense of anticipation residing in his voice. “And so being out here, in batting practice, and getting to position myself like I’m a very deep outfielder, and getting a jump off the bat, is just so much fun. Of course all the people that know me and that I get to interact with, that’s really a huge part of the fun for me, it’s just such a friendly, exciting experience. And yeah, 12,000 plus baseballs later, and 30 plus years after I got my first one, I still get giddy when I see a ball going up in the air, I’m like ‘Alright baby, here we go.’”

Snagging over 12,000 balls in his career, Hample claims to have hauled in the most in MLB history. He most notably grew a name for himself for catching Alex Rodriguez’s 3,000th hit and Mike Trout’s first-career home run, which brought him to Jay Leno and Conan O’Brien’s late-night shows. Hample regularly travels to all 30 ballparks across the country, recording his exploits for his YouTube channel, which has over 600,000 subscribers.

Hample’s endeavors bring with them ample detractors, however. On the internet and social media, his name is often met with vitriol and people questioning why a 45-year-old is obsessed with a children’s activity. Rumors and suggestions swirl about him knocking kids over, paying people to block off aisles and other uncouth behavior in pursuit of baseballs. Amid Aaron Judge’s chase for the American League – and untainted by steroids – single-season home run record, a “Don’t let Hample catch it” movement swept across Twitter, and when Judge hit the record-tying homer, Hample’s name immediately started trending as fans anxiously checked to see if he got his hands on it. Multiple players, like Clayton Kershaw, have refused to toss him a ball and others, like Marcus Stroman, have publicly denounced his behavior.

Recently, he revived much of that discourse while attending a Rockies game. After not being allowed into a certain section his ticket didn’t grant him access to while attempting to chase a home run ball, Hample posted a video of himself arguing with a Coors Field usher to “stop enforcing BS rules” and stop “being so strict.” The decision to post the video seemingly backfired. Hample was met with wide-scale criticism for how he came off, particularly after the usher told another fan that Hample had stolen a ball from a fan in the handicapped section of that game. 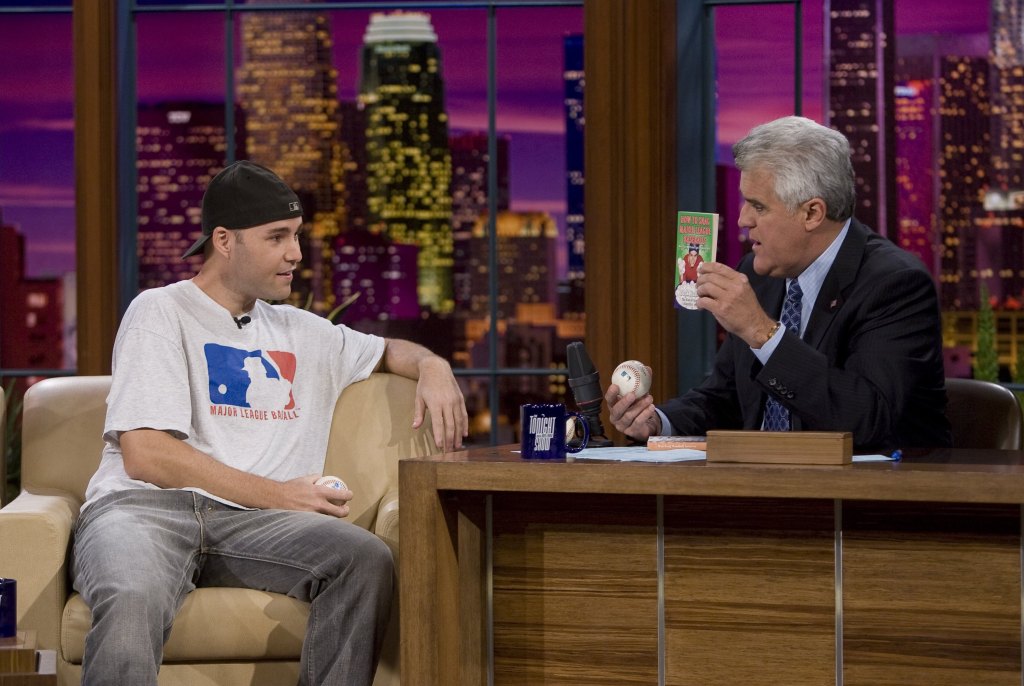 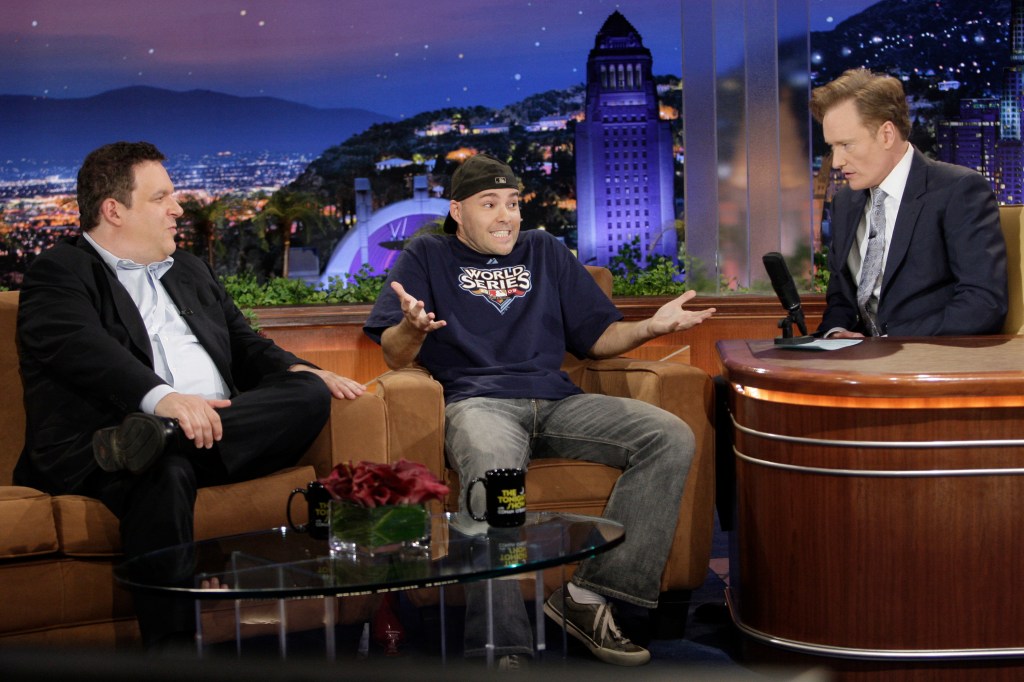 Hample denies the usher’s claims, as he does any notion of him knocking anyone over or stealing any ball.

“People assume that I’m a bad guy, and what I’m doing is somehow hurting others or negative,” Hample said. “People who think that have clearly never watched my videos, and they have definitely never seen me in person. When I’m at a game, it really is a joyous experience.

“I’m recognized by dozens if not hundreds of people, kids are back in school now, so it’s a lighter crowd. But over the summer, in a sold-out stadium, there could be 300 or 500 people that approach me. And it’s mostly kids, and they’re all thrilled to see me. Yet it’s the grownups on social media that will claim that I’m robbing balls from kids, and I’m knocking kids down, but anybody who really sees what I’m doing, I don’t see how they can walk away from this with a bad impression, because it really is a happy, positive thing.”

Although he denies knocking anyone over, make no mistake – Hample will go for any ball he can get to. That’s prompted its own criticism, and he’s open about sprinting multiple rows or climbing seats to capture various stray balls.

If it’s attainable, Hample is going for it. 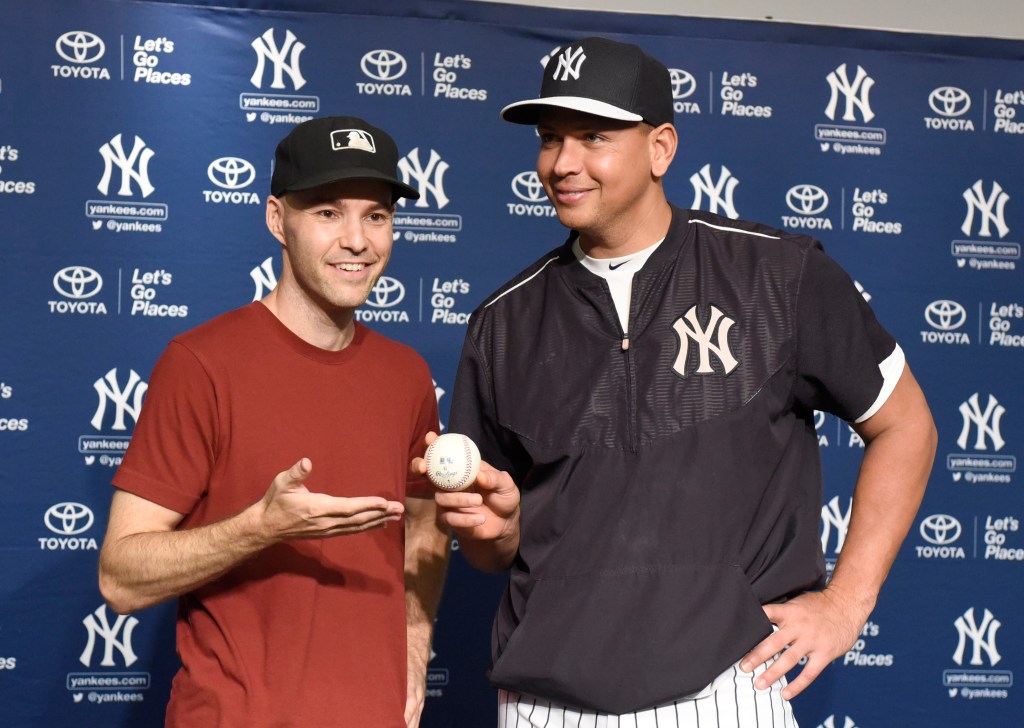 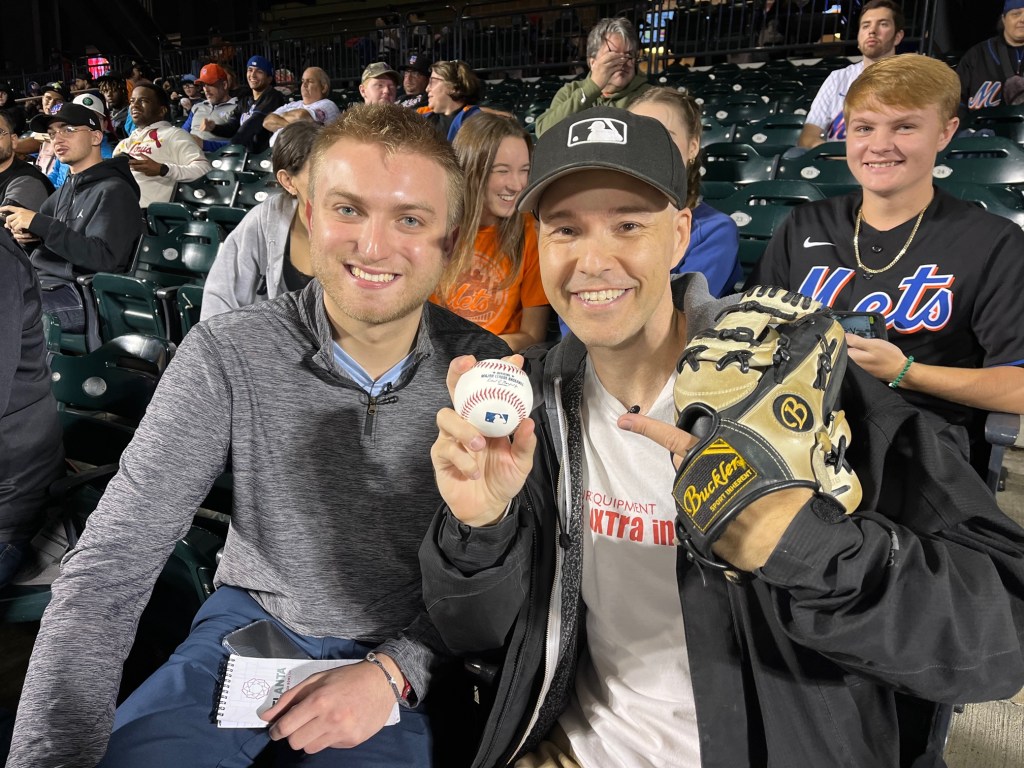 Zack Hample attended the Mets’ walk-off win over the Marlins with The Post. Jason Zucker

“We call it cherry-picking, especially if I’m in the row up, it’s very easy to do something like that,” Hample said. “And certainly if I did it, like nobody can claim ownership of a batted ball. Sometimes a player points at someone and you know who he’s throwing it to. And really everyone should back off in a situation like that. But when it’s just like a random chuck or a home run, you can’t be like ‘Oh, it was intended for me.’ And usually people go for what they can get… So it’s like, generally you go for what you can get, you try to be respectful, I give away all the balls. If somebody is camped out underneath something, I just want to keep the peace.”

The Citi Field gates opened at 5:10 p.m., and at 5:11 Hample was situated in the left field stands with his hand in his special edition Buckler glove, ready for what he calls his favorite part of the game. The big fish and balls of real importance of course come during the actual game, but batting practice offers an endless supply of home runs launched into the stands to chase.

By 5:12, the first ball nestled in Hample’s mitt, tossed up by Marlins ace Sandy Alcantara. The two briefly shared a catch before Hample continued elsewhere, as homers started peppering the left field seats. He caught 12 balls throughout batting practice – three were home runs, while the others were toss-ups from players. Of the home runs, Hample caught one on the fly while fetching the other two after they landed in the seats.

Of particular help to Hample’s 12-count was Marlins reliever Richard Bleier, who just the night prior went viral himself, getting called for three straight balks to force in a run and subsequently being ejected. Bleier is a fan of Hample’s videos and the two are friends, Hample claiming he is the current player he is closest with. Hample said the most balls he got from one player is Beltran with 38 and Bleier is chasing that mark, resulting in his constantly throwing loose balls up in Hample’s direction. Hample’s face lit up as Bleier entered the game in the eighth inning, and the two exchanged text messages after Bleier exited the outing.

Regardless of Bleier’s help, there was no luck involved. Hample studies spray charts, stadium seating and weather patterns to best position himself.

“One of my favorite quotes is from Branch Rickey, who said ‘Luck is the residue of design.’ And I think that applies to me,” Hample said. “Obviously, I can’t will any certain baseball to fly my way, but I feel like if I put myself in the right spot, day after day and I’m sitting in the outfield on the stairs, empty row, there’s standing room, eventually they’re gonna hit a baseball to me. And if I catch enough balls, some of those are gonna be important home runs. So there have been times where I feel like my luck is really crappy. I’ll go two months without catching one, and it feels like I’m never gonna get one again. Then I catch two in one game or four in a month, and it’s like ‘Oh man this is so easy, how do I not catch them all the time.’” 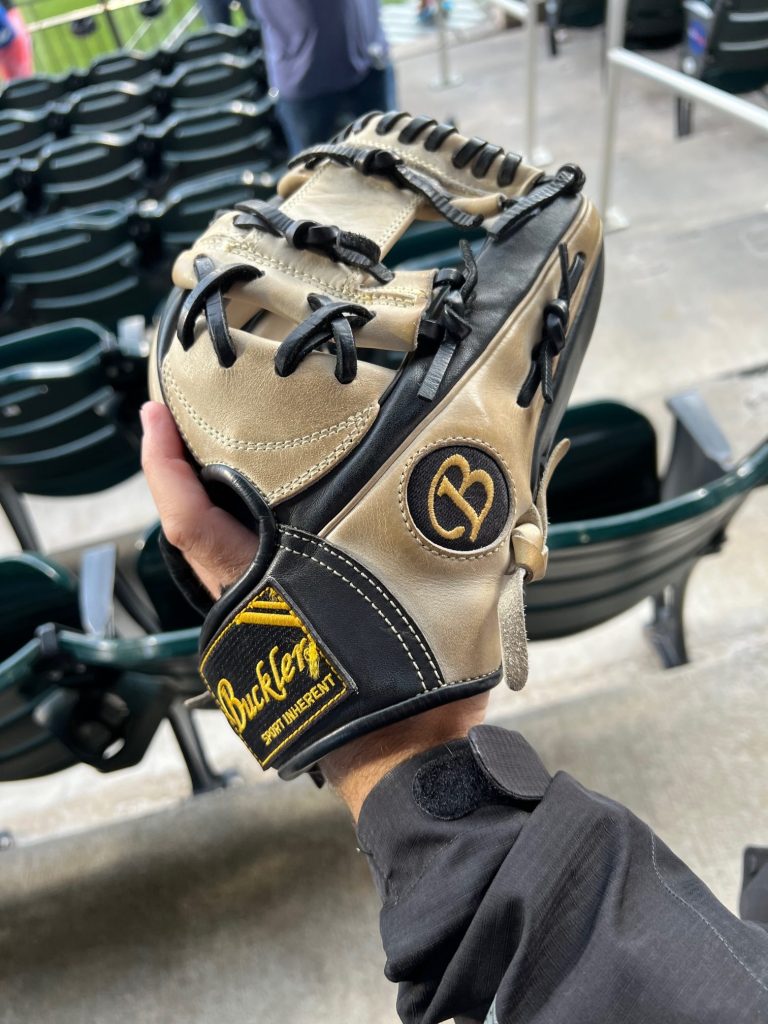 Zack Hample wore a special edition Buckler glove, which he used to snag 12 baseballs throughout the evening. Jared Schwartz

There was hardly an inning when a kid didn’t spot him or ask for a picture or autograph, as dozens of children, seemingly fans of his YouTube channel and videos, flocked his way. The sentiment was overwhelmingly positive, particularly among the early-bird fellow ball-hawkers at batting practice, who were largely in awe. Hample gave away most of the balls he fetched during batting practice, attempting to spread them out to fans who had not caught any yet.

Only one fan, sitting in front of Hample during the actual game, had anything negative to say, telling him he hoped he didn’t catch Judge’s record home run. Just a few innings later, however, the fan asked for a picture and enjoyed his presence.

“I just found one of his videos. I was looking up stadiums and people watching games. I just found his videos, and I watched all of them,” one young fan named Jake Weinberger, who met Hample for the first time, told The Post. “It was cool, I heard his voice and I was like ‘is that Zack Hample?’ It’s a good thing for kids because it shows us that maybe if you don’t think you’re going to catch something, you can. I don’t think they [the negative rumors around Hample] are true. They say he doesn’t give a lot of balls to kids, but he really does.” 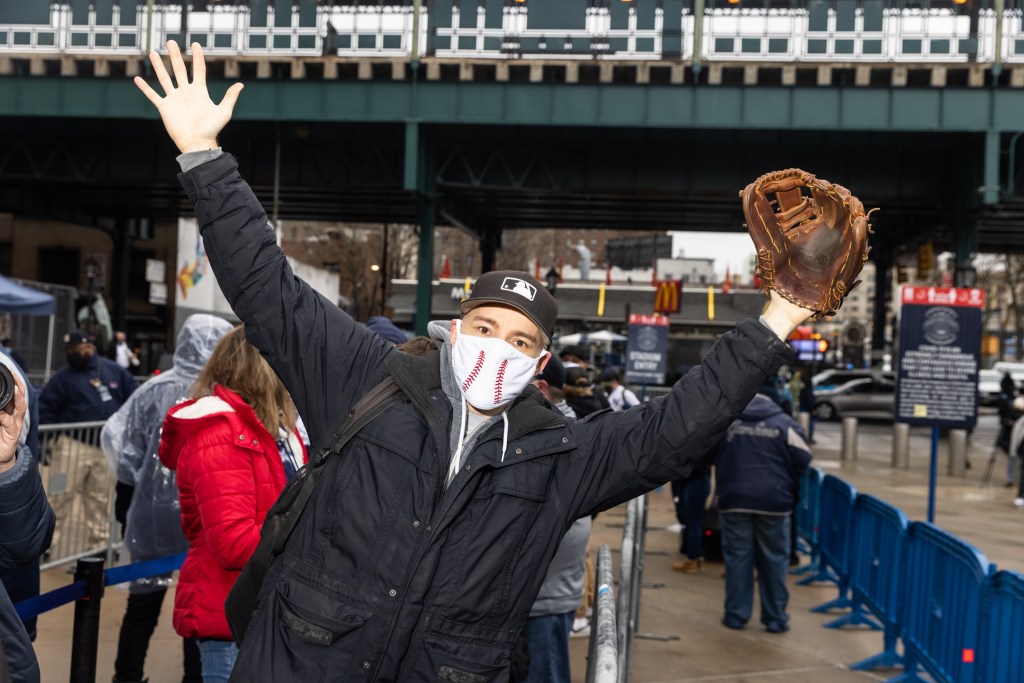 Throughout the evening, everything in Hample’s world is intentional. He brings with him multiple hats, changing what he wears throughout the game depending on who is in the field, making it look as if he’s a fan of that team. Before every new batter, he checks his surroundings and monitors where he’s able to move if a ball is hit his way. The seats he picked – in row seven of section 135 – were chosen specifically because they were situated next to a break in the aisle’s railing, which he knew in advance. He has constant instructions for his cameraman, who goes by the moniker Fenway Chris, and his intern Max Edelman, a college student at Hofstra, to capture what he knows will be ideal for his YouTube videos – ends of innings, fan reactions, big hits. He does take a break to eat, chicken fingers and fries were Wednesday night’s choice, but he can throw on his mitt and be ready to catch in just a few movements – and his food makes it in his videos. Every few innings, he records himself offering an update on the evening.

All of it will likely continue to draw negative attention his way, despite his actual real-life interactions.

But all of it makes him who he is – MLB’s best ballhawk.

“It’s just part of the game, part of the challenge, and getting inside the players’ heads and getting them to toss you balls,” Hample said. “I don’t want to let the jerks win, and if there’s someone making threats online I just have to keep doing my thing and keep putting out my positive message, and like I said, hope that if someone sees me, and doesn’t like me based on something they’ve heard, they see me in person and there’s 20 kids around me getting autographs, maybe they’ll think twice and be like, ‘You know something, maybe this guys isn’t so bad.’ And if I can just change the opinion of one person here or there, that goes a long way.”