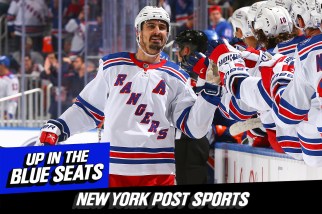 I-GOR, I-GOR, I-GOR. The Rangers netminder heard his name being chanted throughout Madison Square Garden Wednesday night, leading the Blueshirts to a 4-1 victory over the Flyers. Some are calling him the best or one of the best goalies in the NHL right now and it’s hard to argue. Shesterkin has been the number one reason this Rangers team is right there toward the top of the Eastern Conference, tied for third place.

To discuss the red-hot Rangers, we bring you a new episode of the “Up In The Blue Seats” podcast with Ron Duguay and Mollie Walker. The Post’s Larry Brooks drops by in his weekly spot as well as MSG Network’s Bill Pidto.

Up In The Blue Seats Podcast with Ron, Mollie & Jake:

Catch up on all episodes of “Up In The Blue Seats,” a New York Rangers podcast, by subscribing to the podcast on Apple Podcasts, Spotify, or wherever you get your podcasts. New episodes drop Thursdays during the regular season.