The Dolphins’ star receiver claimed that an assistant along Cincinnati’s sideline said something to him that he didn’t appreciate during Miami’s 27-15 loss on “Thursday Night Football.”

“Whichever coach that is, I’m gonna come find you bro … me and you gotta have a mano a mano conversation,” Hill told reporters after the game. “Cause at the end of the day I felt disrespected as a man.”

In the buildup to the game, Hill notably called out Bengals cornerback, and ex-Giants bust, Eli Apple, saying “I can’t wait to go against Eli Apple. I owe you, boy. I owe you. Cheetah is here.”

Hill was seemingly referencing the Chiefs’ AFC championship loss to the Bengals last postseason, where Apple critically tackled Hill short of the end zone just before halftime. Hill was subsequently traded to the Dolphins in the offseason. 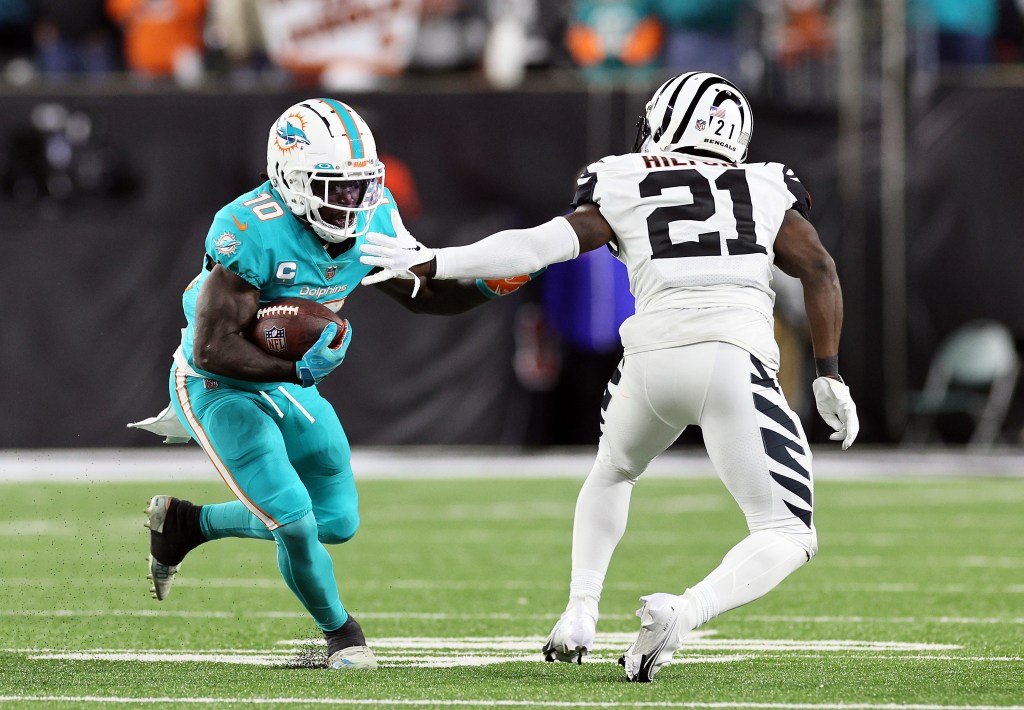 Tyreek Hill claims a Bengals coached ‘disrespected’ him during the Dolphins’ loss to the Bengals. Getty Images

After the trash-talk, Hill recorded 10 receptions for 160 yards in the loss, which was marred by Tua Tagovailoa’s scary injury. The third-year quarterback was stretchered off the field after sustaining head and neck injuries while being sacked.

The scary scene, and health of his new quarterback, overtook everything else for Hill.

“You wanna win the game but obviously you wanna make sure that your brother is alright,” Hill said. “Football is just our part time job, but that brotherhood is something that’ll last forever.”

For his part, Eli Apple mostly stayed quiet before the game, but his teammates were outspoken in response to Hill.

“I don’t know if Eli got him tickets to the Super Bowl last year or not,” Bengals safety Jessie Bates said during the week. “I think that’s probably why he’s a little upset. Somebody comes after Eli, he comes after all of us, we’re all up for the challenge.”

It appears Hill’s rivalry with the Bengals is only intensifying. Adam McKay Is The Mind Behind That Devastating... 3 How the Yankees’ worst contracts are weighing on their...

6 Notes On The Season: Oscar In Overdrive, The...