If ever there was what we can affectionately call a “Sundance movie” , it is A Love Song, a micro-small, actor-driven heartfelt drama set in the rural west mountainous region of Colorado from first time feature writer/director Max Walker-SIlverman. Premiering in the NEXT section of the Sundance Film Festival tonight this is a deliberately paced look at two lonely lives of former childhood friends now leading a seemingly nomadic existence in the aftermath of grief over the loss of their individual spouses as they forge a tentative reunion that might – or might not – lead to romance, even as they have reached their senior years.  In an odd way it is the perfect companion piece for last year’s Best Picture Oscar winner, Nomadland , a movie also set in the sparse surroundings of the Southwest and focusing on a particular character, now alone , heading out on the road following the end of the life she once knew. It probably is no accident that a key producer here is Dan Janvey, who was one of the producers of Nomadland as well. 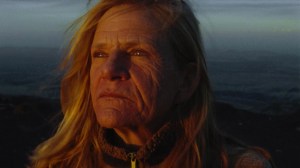 The gift for Walker-Silverman is in his stars, not only those gorgeously captured by his cinematographer Alfonso  Herrera Salcedo in the magical skies that dot this densely populated campground location where the film is set, but mainly in his real stars, Dale Dickey and Wes Studi, two exceptional veteran actors not given the chance to front a film but get one here, a rare outing for senior actors in what might be defined as a tentative romantic drama, but  more apparently a study in loneliness.

The center of it all is undoubtedly Dickey, whose weathered face in unapologetic closeups is a vision the camera is in love with. A veteran of over 60 mostly independent films including Winter’s Bone, Dickey plays the widowed Faye who now has traveled with camper in tow to this isolated spot. We know nothing  about her except she seems to be one comfortable communing with the glories of nature, Slowly it is revealed she is actually waiting for the arrival of an old schoolmate who plans to visit her, a man named Lito (Studi), but whether this is just a story she has made up for rare human interactions at the campground, or is actually true, remains the only level of suspense in what is essentially a character study containing limited dialogue, the best clues in that expressive face trying to find new hope in life as she grows older.  As she – and we- wait for this mystery guest, there is a quirky encounter with a young girl and her four brothers who present themselves as a unit as they explain the need for access to the ground under her camper, a burial spot for their father who they plan to move to a different more scenic location nearby.  There are also the neighbors, a female couple (Michelle Wilson,  Benia K. Thomas) who have some brief but lively screen time. We also meet the camp’s postman briefly delivering letters. That is about it, the biggest problem occuring when the girl and brothers find themselves in desperate temporary need of the engine from Faye’s car.

Fear not, the big event does arrive when Lito actually  drives up and their initially awkward reunion begins, a visit where they get to renew an age old friendship they shared as kids but now only seem to have loss and loneliness in common. They take a swim together, share crackers and ice cream, and Studi has one lovely moment as he plays a song his wife actually loved. Lito asks for Faye’s help in setting up the tent he has brought along to spend the night, but she has other thoughts inviting him to her camper. What is said, is not as important as what is not said in the surface conversations between the pair. Dickey and Studi both add dimension and insight without needing to resort to much dialogue. It is sweet, quiet,  and as a portrait of two souls now alone for all intents and purposes, heartbreaking but hopeful. Walker-Silverman has also managed to put together a wonderfully well-chosen musical soundtrack that adds immensely to the ambiance with songs from Taj Mahal, Jerry Jeff Walker and others. Composer Ramzi Bashova’s guitar-based score is another nice touch.

Thanks to the chance to see Dickey and Studi given this kind of opportunity in an industry resistant to grown up stories of love and longing about those of a certain age,  A Love Song is modest but worth the trip for audiences who want to take it. In addition to Janvey, Jesse Hope and Walker-Silverman also get credit as producers. Cinetic Media is handling sales.