If you were too busy waiting to see if Aaron Judge would tie Roger Maris Thursday night, you missed a crazy Odell Beckham-like catch from Pittsburgh Steelers’ wide receiver George Pickens during the second “Thursday Night Football” game on Amazon Prime Video.

In the first quarter, with the Browns leading 7-0, Steelers quarterback Mitchell Trubisky threw toward the right sideline to Pickens. The ball was thrown a little behind the rookie receiver, yet he was able to contort his body and stick his right hand out to snag the ball out of midair.

Pickens told reporters Tuesday he was open almost all the time in the Steelers’ Week 2 loss against the Patriots.

“I just say that because I’m a big guy that runs in the low 4.4s,” Pickens said, per the Pittsburgh Tribune-Review. “I always have a step on somebody and my step is naturally longer than the other person, and I’m actually fast. I’m always going to have a step and always feel like, 99 percent of the time, I’m open even though the ball gets there in the air and the defender gets time to catch back up. But I’m open as soon as I get off the line.”

Another angle of the catch shows Pickens almost perpendicular to the sideline. 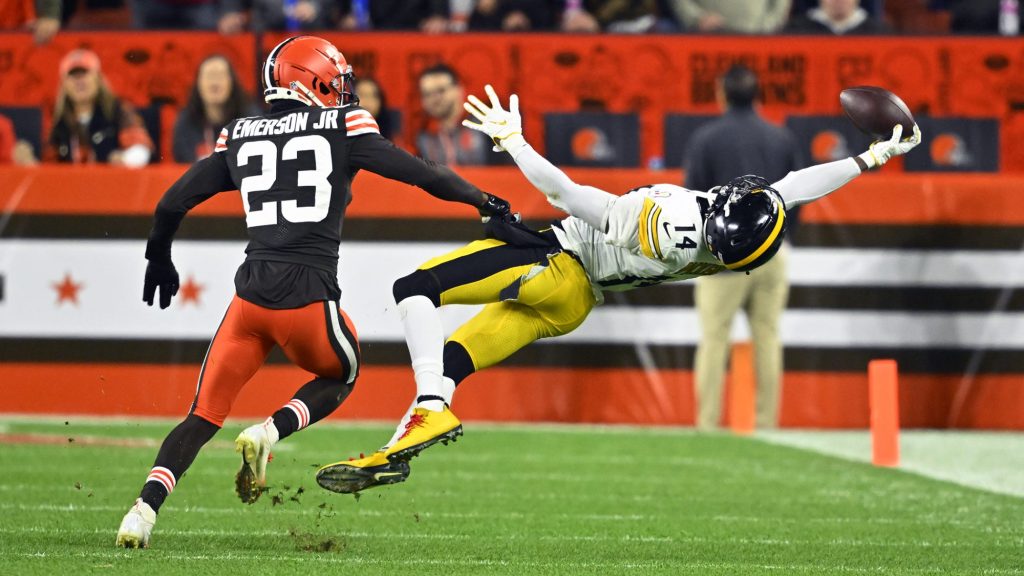 Steelers wide receiver George Pickens (14) makes a one-handed catch with Browns cornerback Martin Emerson Jr. (23) defending during the first half of a game in Cleveland.AP

Pickens’ acrobatics have people drawing comparisons to Odell Beckham Jr.’s catch against the Cowboys in 2014 — a game the Giants lost.

The Steelers led the Browns at the two-minute warning before halftime at FirstEnergy Stadium in Cleveland, as the world got its second look at the Brownie the Elf logo.