OMAHA, Neb. — The start of each half was terrible. And the rest of the game wasn’t much better.

With a chance to build off its recent momentum, St. John’s was a no-show and slid backward significantly, reverting to its poor play during the non-conference season.

Defense was nonexistent. Urgency was lacking. So was any kind of aggression. If the Johnnies were prepared to face Creighton, they didn’t show it in an embarrassing, 87-64 loss at CHI Health Center.

They made the Bluejays, an NCAA Tournament bubble team, look like a Final Four favorite. With the lopsided defeat, St. John’s (10-6, 2-3 Big East) fell to 0-5 in Quad 1 games. Mike Anderson’s team was annihilated from beyond the 3-point arc (Creighton made 14 of 27 attempts) and beaten up on the glass, 49-29. It wasn’t ready to start either half, outscored 20-7 to start the game and 17-5 coming out of the break.

For a team that entered the season with NCAA Tournament expectations, it’s getting late. The Johnnies don’t just need to build a résumé, they need to start one. 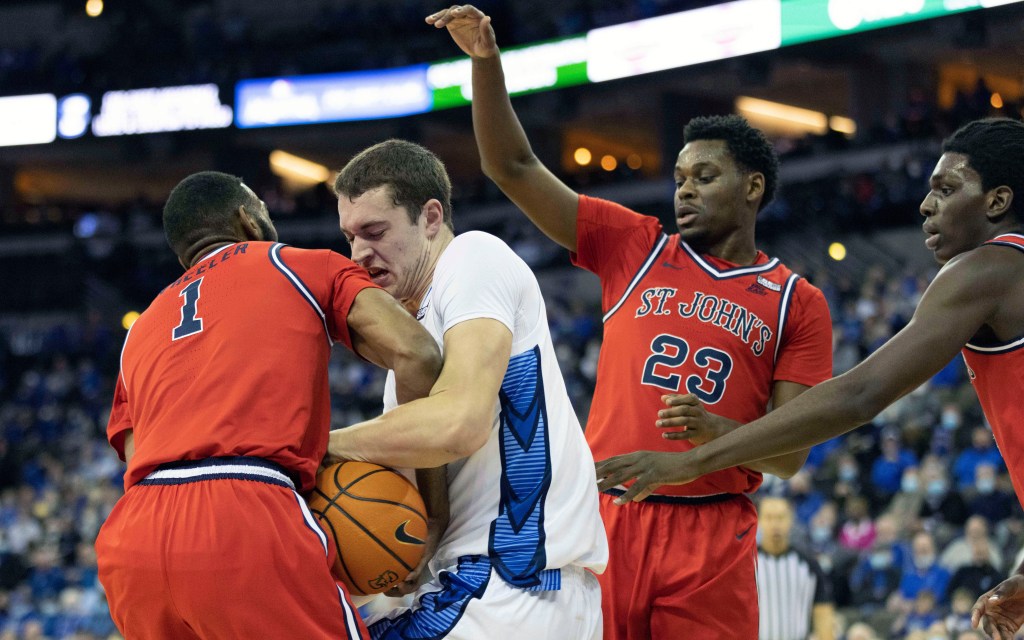 Ryan Kalkbrenner is heavily pressured by Aaron Wheeler (No. 1) and Montez Mathis.AP

The first half started poorly, and it never got much better, aside from a few brief stretches. Creighton held a 13-point lead just 6:04 in. The Bluejays got any shot they wanted, using the Johnnies’ pressure against them. St. John’s couldn’t stay in front of the Bluejays, forcing extra help and creating one open shot after another.

St. John’s was sloppy, it didn’t identify shooters and was crushed on the glass. Still, it trailed by just five, largely because of Wheeler’s strong play, deep into the opening 20 minutes. But then O’Connell got really hot. In a 12-3 run, he hit three consecutive 3-pointers, extending the lead to 14.

At halftime, it was a 15-point bulge. Champagnie, the Big East’s leading scorer, was limited to three points on 1-of-10 shooting. St. John’s did have a 20-14 edge in points in the paint, but it didn’t matter with Creighton making 7 of 11 from beyond the arc and shooting 56 percent overall as a team. Starting center Joel Soriano, in particular, was ineffective. In the eight minutes he was on the floor, the Johnnies were outscored by 19 points.