Sharon Osbourne: Woke people act like ‘the rest of us’ are ‘the devil’

“Woke people are like born-agains,” the TV personality told The Post. “It’s like a religion. The woke people, they are entitled to opinions, God bless them, even though they bore me to death — but the rest of us are not. They have a new word everyday, and a new campaign everyday, and if anyone goes against it … what? We’re the devil? They certainly act like we are.”

In March 2021, Osbourne earned ire when she tweeted her support of Post columnist Piers Morgan’s right to opine that Meghan Markle had exaggerated claims of racism and neglect within the royal family during Markle and Prince Harry’s highly publicized interview with Oprah Winfrey.

“@piersmorgan I am with you. I stand by you. People forget that you’re paid for your opinion and that you’re just speaking your truth,” she tweeted. 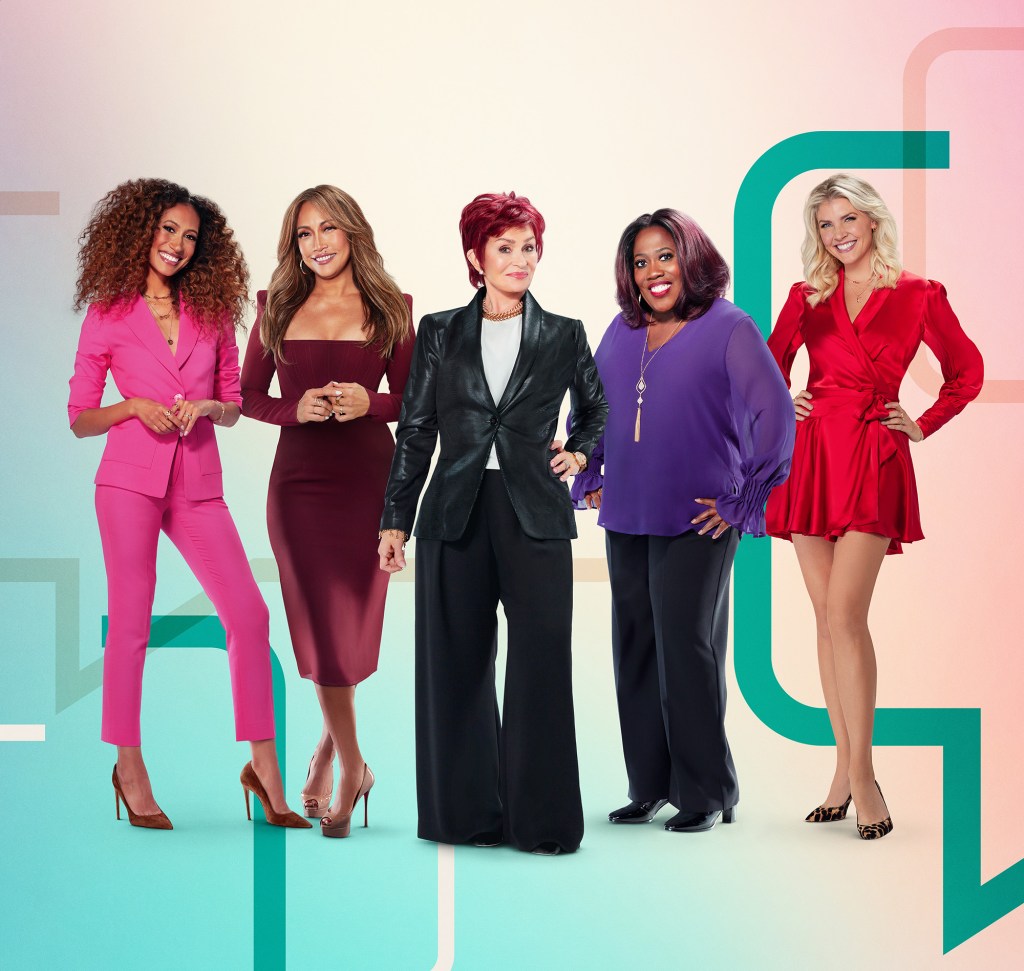 Osbourne says she received an emoji from “The Talk” co-host Sheryl Underwood (second from right) the morning of her blow-up, which she now thinks was a warning of things to come.CBS via Getty Images

Early the next morning, just before heading to the Studio City, Calif., set of “The Talk,” co-host Osbourne received what she now suspects was a tipoff that the day’s telecast would be a bumpy one.

Co-host Sheryl Underwood “sent me a kissy-face emoji. I thought that was quite nice at the time. Looking back, though, I wonder, why would you send that at 7 in the morning unless it was to somebody you were f–king?” Osbourne recalled. “Maybe it was her conscience sending it because she knew what was about to happen.”

Once cameras were rolling, Underwood asked Osbourne what she would say to people who thought she might have given “validation or safe haven to something [Morgan] has uttered that is racist.” 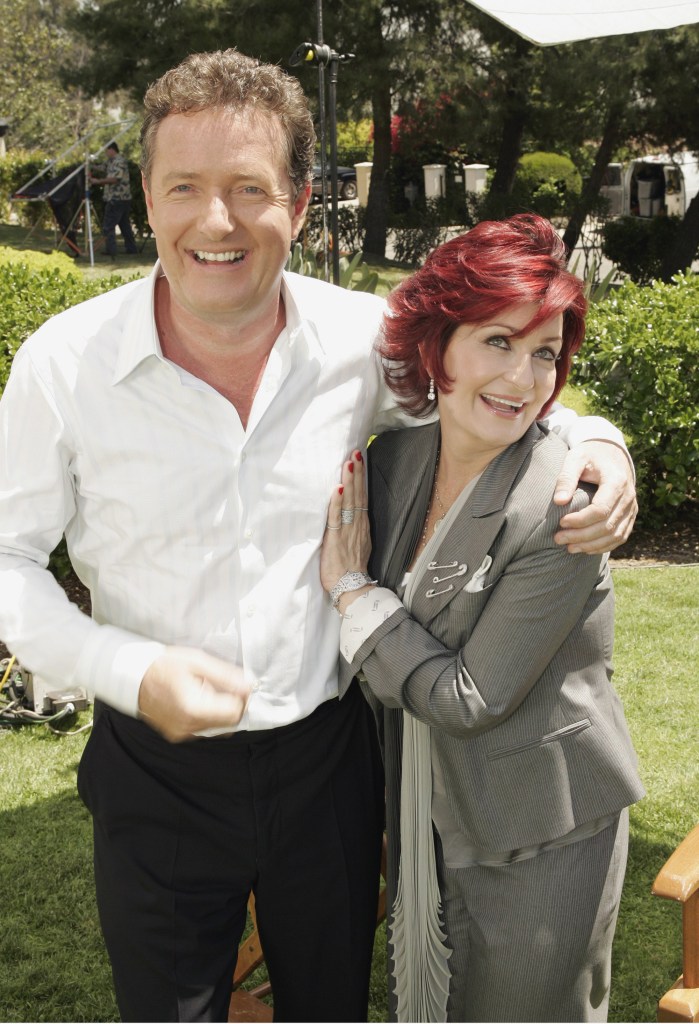 Osbourne, who turns 70 on Oct. 9, was clearly taken aback. “I feel even like I’m about to be put in the electric chair because I have a friend who many people think is a racist, so that makes me a racist … What’s it got to do with me? How can I be racist about anybody?” she asked Underwood.

“I don’t want anybody here to … think we’re attacking you for being racist,” Underwood clarified. But, as far as Osbourne was concerned, it was too late: She had been branded a racist by association.

It was a crash course in how the expression of an opinion — even saying that columnists have the right to express their own opinions — can destroy a career. 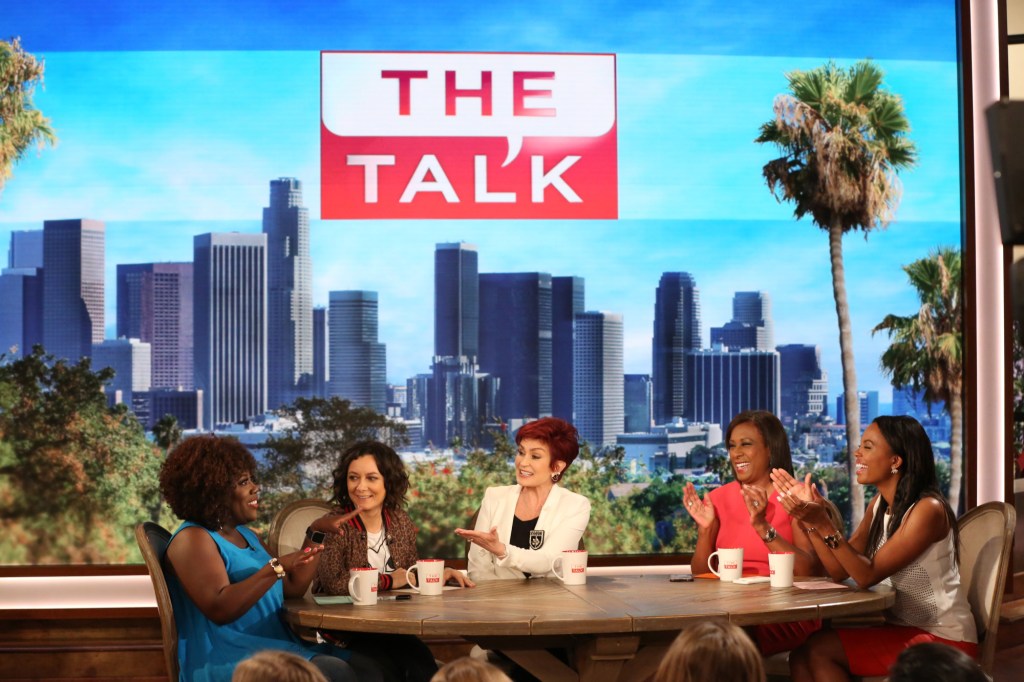 Osborne feels she was punished by the show for expressing her opinion.CBS

CBS said in a statement that “Sharon’s behavior toward her co-hosts … did not align with our values for a respectful workplace.” Osbourne, who feels punished for speaking her mind, left the show after 12 years.

Now, she’s talking about the incident — as well as her family and life with rocker husband Ozzy Osbourne — in “To Hell and Back,” a four-part documentary series now streaming on Fox Nation. She also explores how woke culture and social media shaming is changing our world.

“Woke people want to be accepted by everybody, but why can’t non-woke people be accepted by them?” Osbourne told The Post. “I’m not talking about hate groups — they are the worst in the world — but we need to let people have opinions. If our opinions get taken away, we might as well be living in China. [Woke people] tell you what to say and how to behave. If that is how you want to live your life, good for you. But it ain’t for me.” 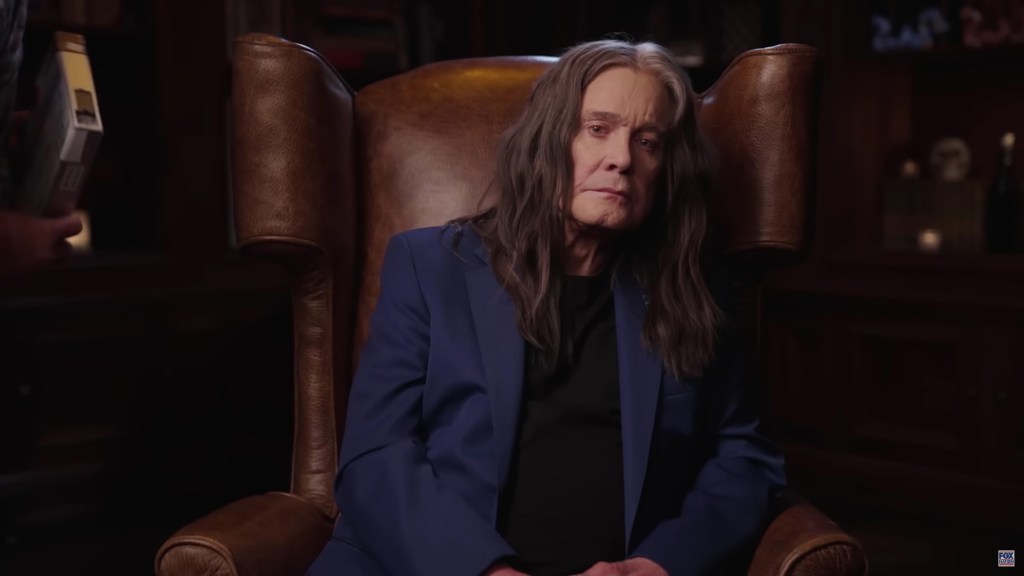 Ozzy Osbourne, who appears in “To Hell and Back,” has been married to Sharon for 40 years.FOX

Earlier this month, Osbourne told Page Six that she believes a CBS executive arranged for her “The Talk” co-hosts to put her through a traumatic on-air ordeal to punish her for being disloyal to the network, which had also aired Markle and Prince Harry’s interview with Winfrey.

“They were initially pissed with me because I was saying the [Oprah broadcast] was s–t. Just to people at the studio. I didn’t feel it was genuine,” Osbourne told Page Six. 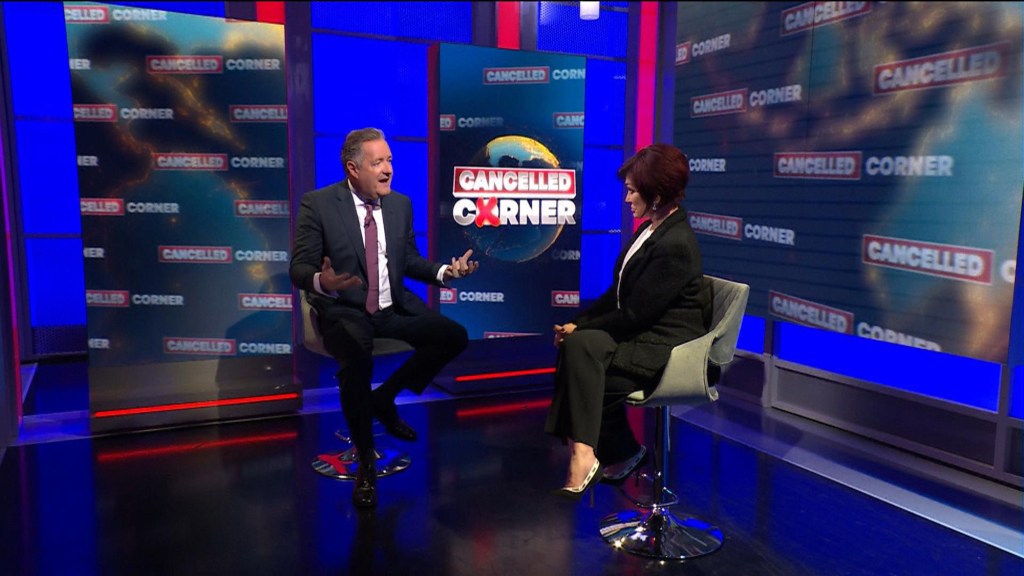 CBS has previously said that an investigation found no evidence that the confrontation between Osbourne and her co-hosts was orchestrated by execs.

Osbourne recently hooked up with Morgan to co-host a morning chat show in the UK, also called “The Talk.” She’s producing a scripted movie, from Sony Pictures, about her and Ozzy’s love story — and hopes that actress Florence Pugh will play her.

And Osbourne is working 10-part BBC special that chronicles her family’s move back to England from California. “There’s a lot of woke stuff in Britain, but also a lot of tolerance,” she told The Post. 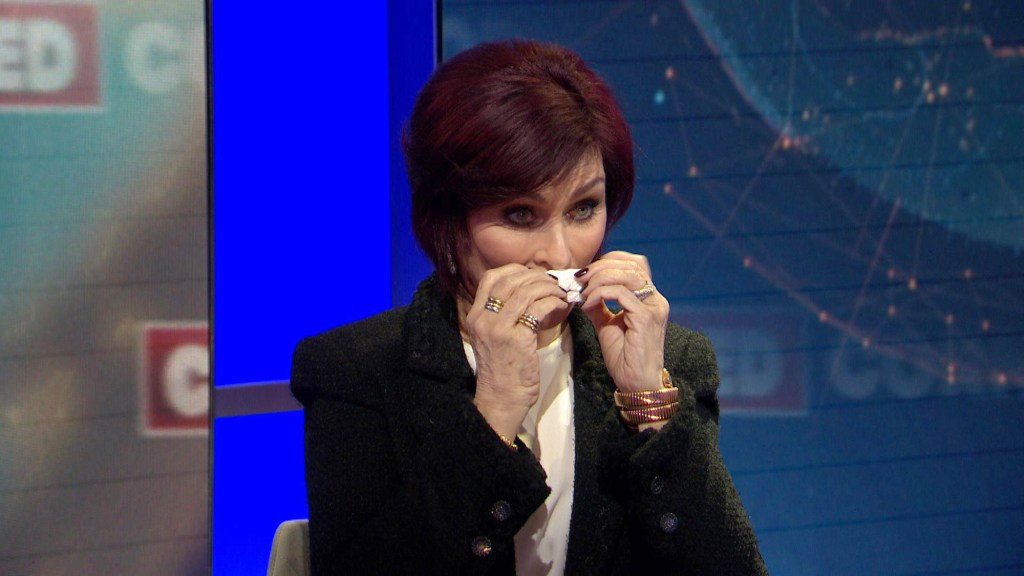 Osbourne, of course, is no stranger to controversy and battles. As the longtime manager of Ozzy, she’s been known to feud with other bands and even cut Iron Maiden’s electricity when they played too long at Ozzfest. On her family’s groundbreaking reality show “The Osbournes,” she once chucked a frozen ham at the home of her annoying Beverly Hills neighbors. More seriously, she successfully beat back colon cancer. And she’s done it all with her trademark profanity and blue humor.

But, she explained, ardent wokeness is killing candor.

“It’s become finger-pointing,” Osbourne told The Post. “Everybody is pointing fingers … It makes you want to hide the real you. You’re scared.” 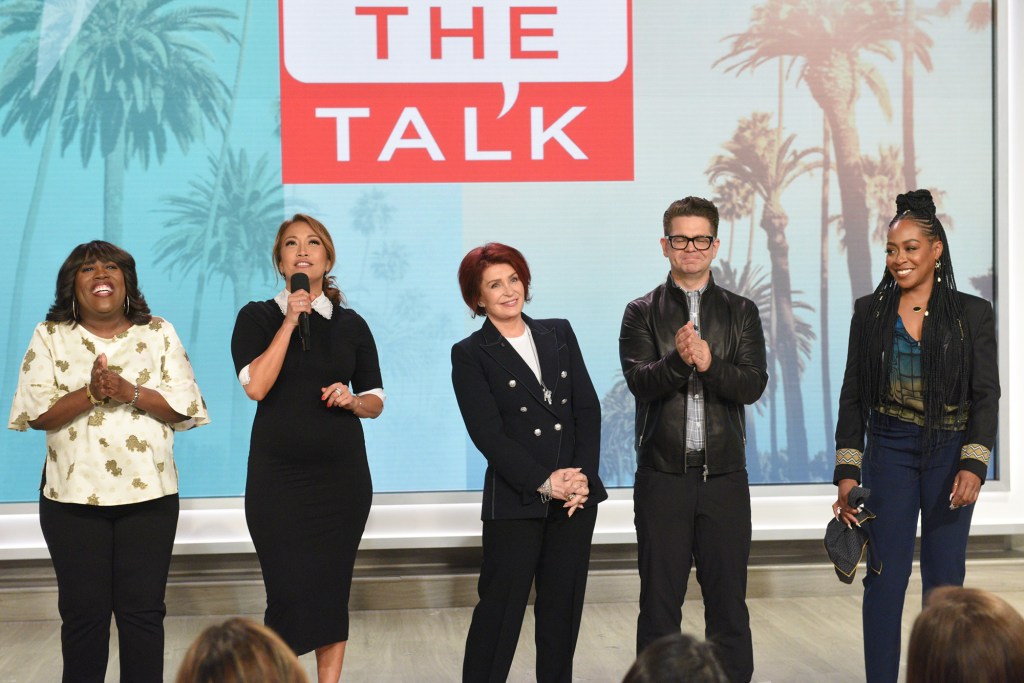 Osbourne (center, next to son Jack) likened the woke to “born-agains.”CBS

She agrees with sentiments like those expressed by John Cleese, who has worried that wokeness will “stifle creativity.”

“Even comedians are afraid, and it is their job to be irreverent,” Osbourne said. But, she added, when Underwood went on “The Steve Harvey Morning Show,” Harvey “did not mind making jokes about me. And that’s fine. Carry on.”

Certainly, it is what she plans on doing.

“My parents worked their asses off and so do I. I will decide when my career is over,” Osbourne said. “The [‘Talk’] experience taught me a lot, but I hope it has not changed me. I’m happy with who I am: I joke, I have a dirty mouth and a great sense of humor. I don’t want to hurt anyone. I am excited about the future and I will say what I want to say. I have earned that right.”

‘Lewd’ scene with Margot Robbie in ‘The Wolf of...