Serena Williams on why she’s retiring now: ‘I definitely don’t want to be pregnant again as an athlete’ However, she was reluctant to use the word “retirement,” a term she finds outdated.

Rather, the hard-hitting heroine said she will be “evolving” into a new, more personally enriched version of herself after playing in what will be her final US Open at Flushing Meadows in Queens later this month.

“I’m here to tell you that I’m evolving away from tennis, toward other things that are important to me,” said Williams in the September issue of Vogue, which made its digital debut this week. 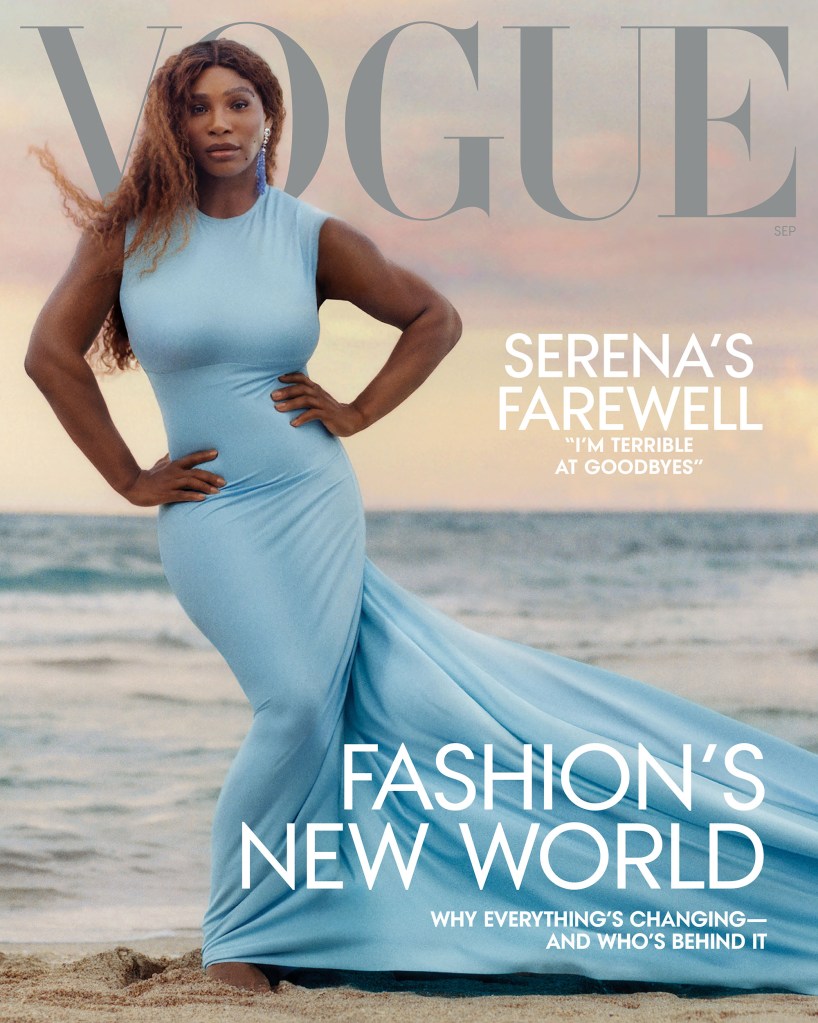 Williams reveals what she will miss most after retiring from tennis this year as the cover star of the Sept. 2022 edition of Vogue magazine. Photographer: Luis Alberto Rodriguez

In place of the game, Williams — who lost to 24-year-old Harmony Tan at Wimbledon in June, but won a match in Toronto on Monday at the pre-US Open tournament — plans to grow her family with husband and Reddit co-founder Alexis Ohanian, 39.

The couple, who tied the knot in November 2017, already shares 4-year-old daughter Alexis Ohanian Jr., whom Williams often refers to by her middle name, Olympia.

The doe-eyed toddler posed on a sandy, sunset-lit beach alongside her muscled mama for Vogue, playfully cloaking herself with the lengthy train of Williams’ blue, hip-hugging Balenciaga gown for the cover shot.

“Alexis and I have been trying to have another child,” Williams revealed, adding that her daughter’s nightly prayer request is to be a big sister to a baby girl. 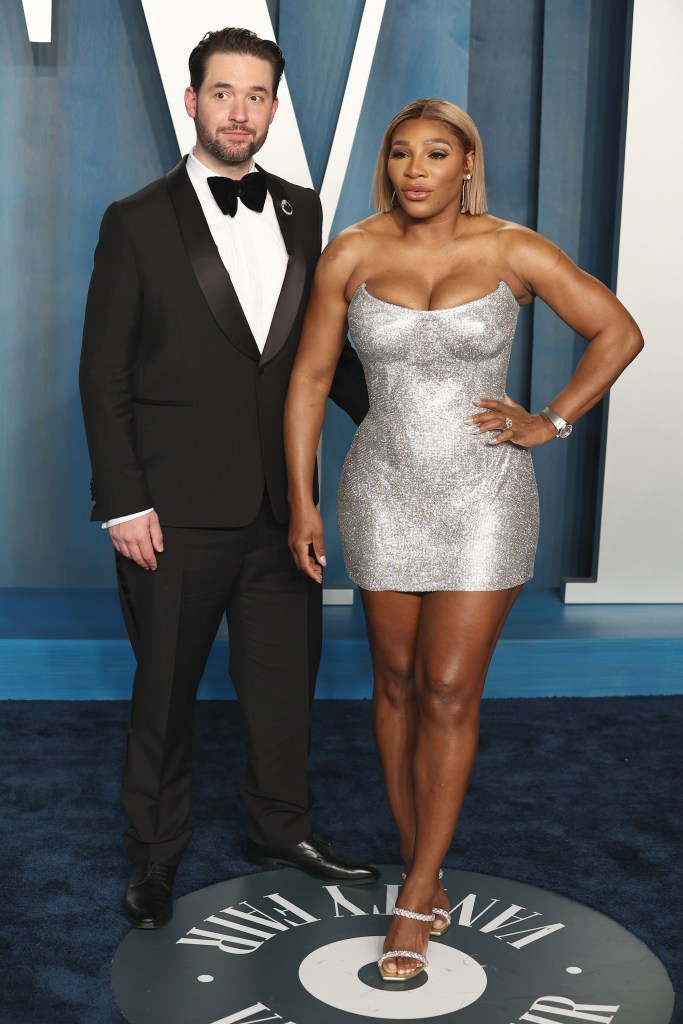 Williams revealed that she and her Reddit-founding husband, Alexis Ohanian, have been trying to get pregnant with their second child for the past few months.FilmMagic

While pregnant with Olympia back in 2017, the match marvel deftly bested opponents on the tennis court, and even took home her seventh Australian Open title — a challenge she “adored,” but one that made her C-section delivery, after which she experienced a near-fatal pulmonary embolism, “complicated.”

And despite the impressiveness of winning while with child, Williams isn’t interesting in repeating the feat.

“I definitely don’t want to be pregnant again as an athlete,” she confessed. “I need to be two feet into tennis or two feet out.”

But the decision to put down her racket hasn’t been an easy one. In fact, Williams said walking away from court will be “the hardest thing” she’s done. 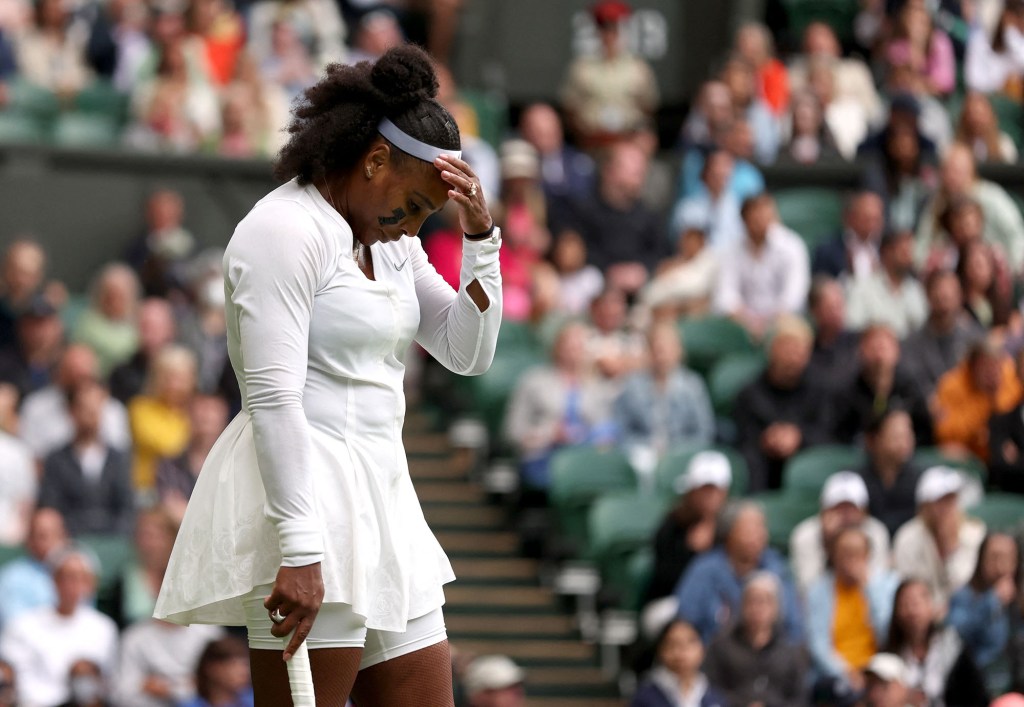 Williams says she “hates” the fact that women in her position often have to make a choice between their beloved sport and building a family — a crossroads she feels male athletes rarely encounter. REUTERS

“There is no happiness in this topic for me. I know it’s not the usual thing to say, but I feel a great deal of pain,” Williams said. “I hate it. I hate that I have to be at this crossroads. I keep saying to myself, I wish it could be easy for me, but it’s not. I’m torn: I don’t want it to be over, but at the same time I’m ready for what’s next.”

The Compton, Calif., native confessed that as a female athlete, she feels the pull between work life and home life. It’s a struggle, she said, that most of her male counterparts will likely never have to endure.

“I never wanted to have to choose between tennis and a family. I don’t think it’s fair,” she said. “If I were a guy, I wouldn’t be writing this because I’d be out there playing and winning while my wife was doing the physical labor of expanding our family.”

“Maybe I’d be more of a Tom Brady if I had that opportunity,” she added, referring to the 45-year-old NFL quarterback legend, who retired after 22 seasons in February and returned to football 40 days later. 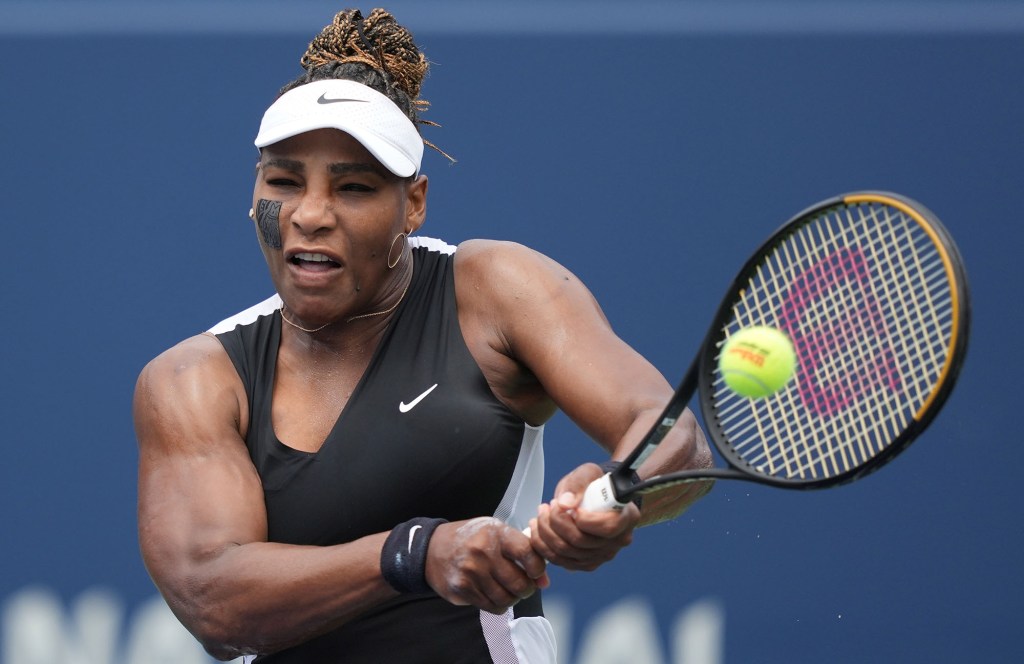 Although the sportswoman admits that playing tennis has also felt like a “sacrifice,” she says she loves how the game has shaped her as a woman. Xinhua/Sipa USA

But, alas, as a woman just weeks shy of turning 41 on Sept. 26, Williams said that the shaking realization that her tennis days are over has been a hard truth to face.

“I’ve been reluctant to admit that I have to move on from playing tennis. It’s like a taboo topic. It comes up, and I start to cry,” revealed Williams, who remembers first picking up a racket to mimic big sister Venus Williams, 42, on the hardcourt at 18 months old.

The revered jock has even struggled to talk about retiring with her husband, her mother Oracene Price, 70, and her father Richard Williams, 80. (Richard’s work as the instructing force behind her and Venus’ success was depicted by Will Smith, 53, in the Oscar-nominated movie “King Richard.”)

“I think the only person I’ve really gone there with is my therapist,” she said. “I can’t even have this conversation with my mom and dad. It’s like it’s not real until you say it out loud. I get an uncomfortable lump in my throat and I start to cry.” 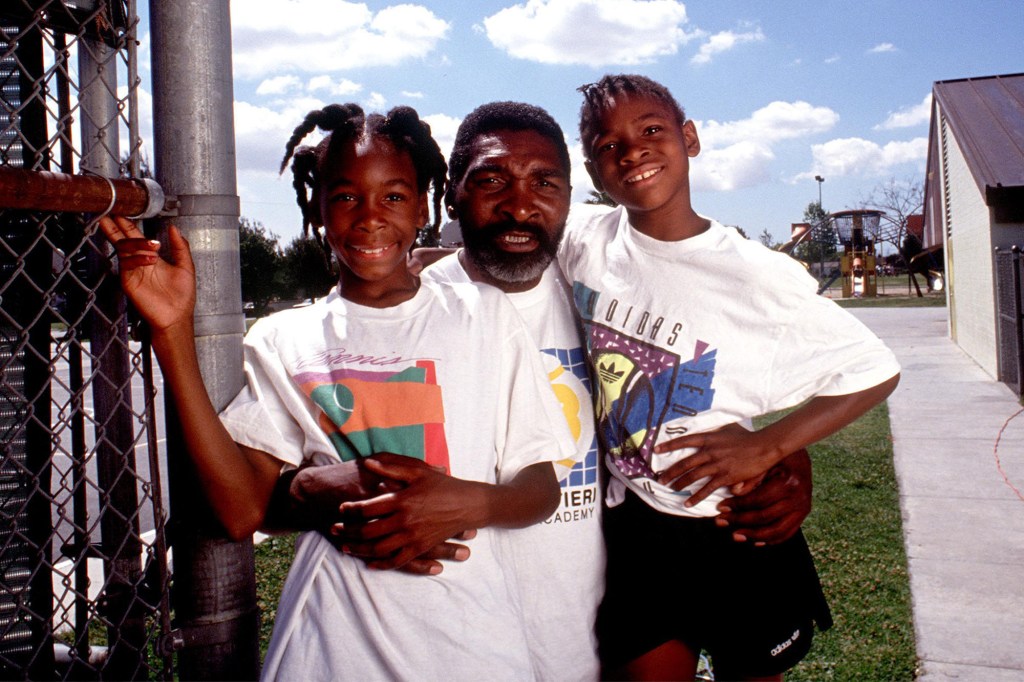 Williams has had a hard time discussing her decision to retire from tennis with her dad, Richard, who helped launch her and sister Venus’ careers. Getty Images

And although she’s saying a tearful goodbye, Williams credits the game — which has earned her a net worth of approximately $260 million — with shaping her entire life.

“This sport has given me so much. I love to win. I love the battle. I love to entertain… I love the performance aspect of it,” said Williams.

“To me that’s kind of the essence of being Serena: expecting the best from myself and proving people wrong,” she explained. “There were so many matches I won because something made me angry or someone counted me out. That drove me.”

But now, she’s happy to let the joys of motherhood serve as her daily motivation. 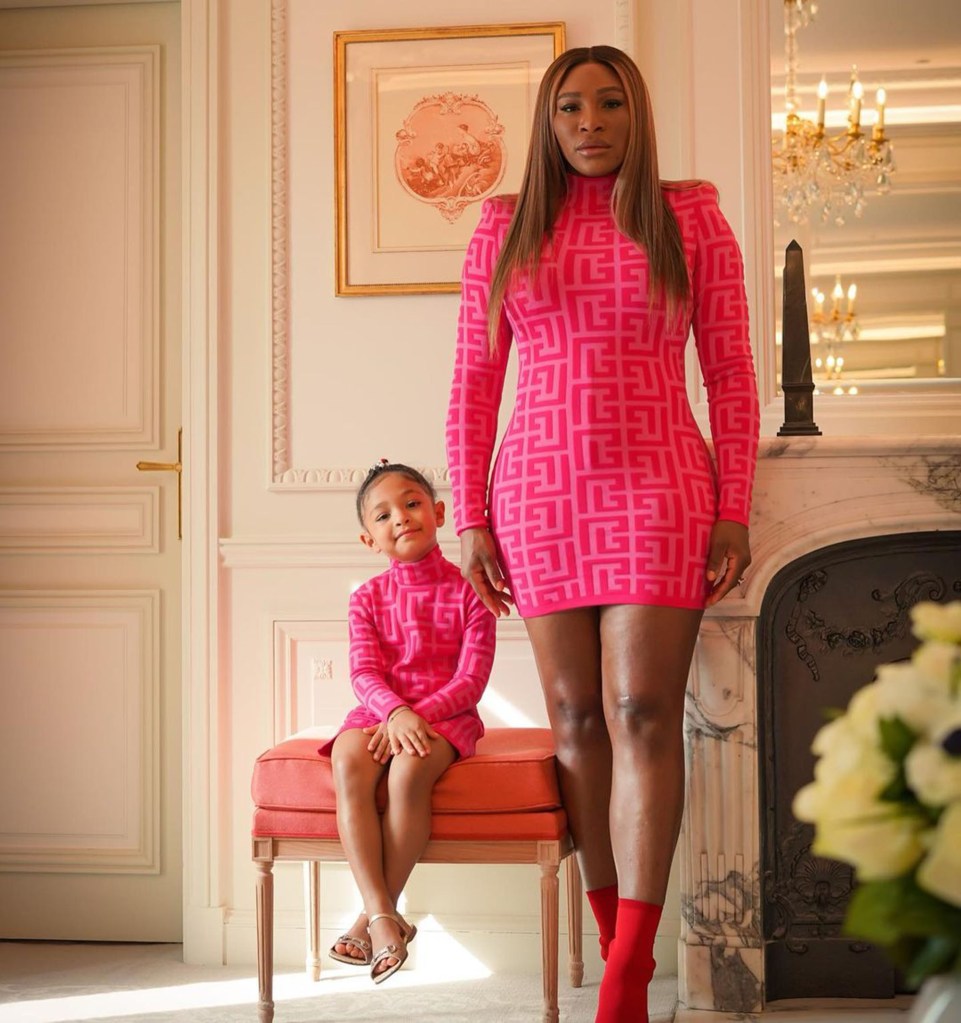 Williams is looking forward to teaching her daughter new things about life once she retires.

“Tennis has always felt like a sacrifice,” stated Williams, adding, however, “that nothing is a sacrifice for me when it comes to Olympia.”

“It all just makes sense. I want to teach her how to tie her shoes, how to read, where babies come from, and about God,” the celebrity mom continued. “Whatever she likes, I like.”

And when she’s not busy raising her tot, Williams, who’s been dabbling in venture capitalism, plans to help entrepreneurs of color finance their dreams.

“In my own life, the balance has been slowly shifting toward Serena Ventures,” she said of her eponymously titled firm.

Through the imprint, which was founded in 2014 and is staffed by six women and one man (“a diversity hire!”), she’s provided the seed-money for billion-dollar brands such as MasterClass, Tonal, Impossible Foods and Noom. 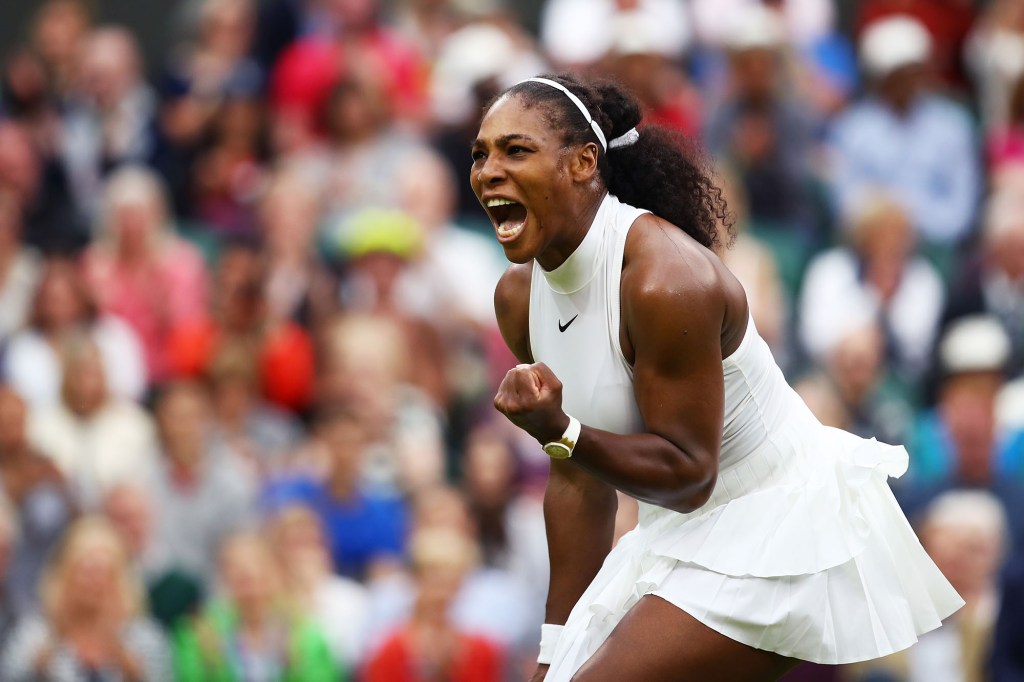 As a venture capitalist, Williams hopes to aid businesspeople of color in their entrepreneurial pursuits. Getty Images

“Seventy-eight percent of our portfolio happens to be companies started by women and people of color, because that’s who we are,” boasted Williams, who’s striving to ensure that her legacy will consist of more than just her athletic talents.

“I hope that people come to think of me as symbolizing something bigger than tennis,” she said. Her off-court goals aside, Williams does pat herself on the back for blazing a trail so that the next generation of tennis girls can “play with aggression” and “kick butt” sans shame or criticism.

“I’d like it to be: Serena is this and she’s that and she was a great tennis player and she won those slams,” said Williams. 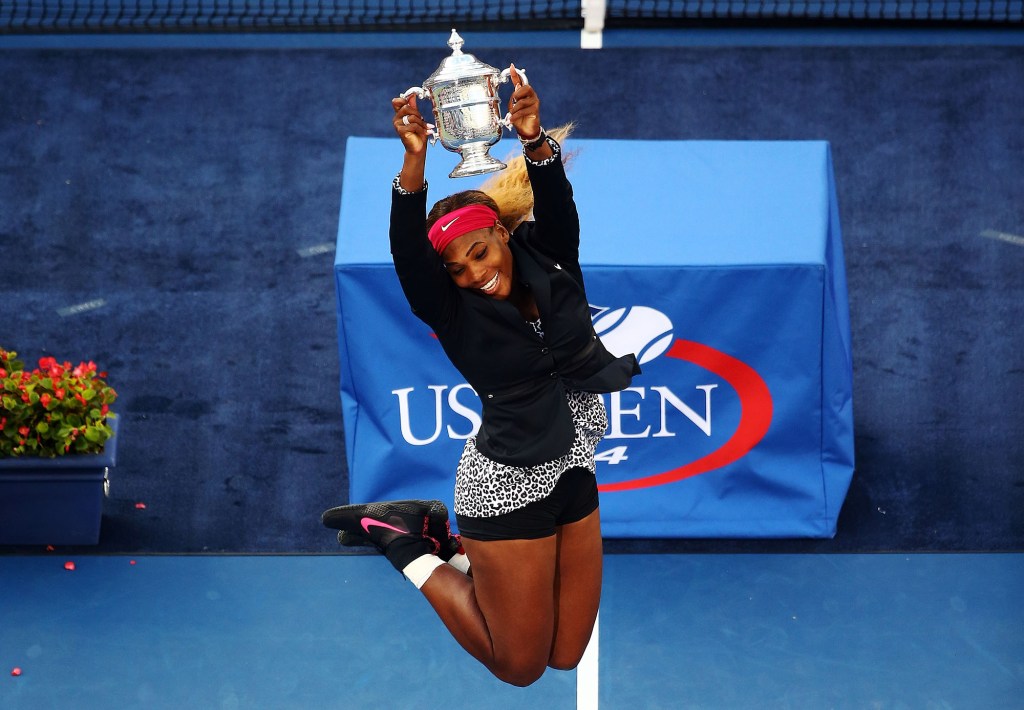 Williams will compete in her final US Open at Flushing Meadows in Queens later this month. Getty Images

“It’s a good fantasy. But I’m not looking for some ceremonial, final on-court moment,” she said before thanking supporters for their unyielding love.

“I’m terrible at goodbyes, the world’s worst. But please know that I am more grateful for you than I can ever express in words. You have carried me to so many wins and so many trophies,” said Williams. I’m a Marilyn Monroe look-alike and get death...