EXCLUSIVE: SAG-AFTRA has collected more than $1 billion in dues and “agency fees” from its active members and financial core non-members since its founding 10 years ago with the merger of SAG and AFTRA, according financial reports the union files with the U.S. Department of Labor. 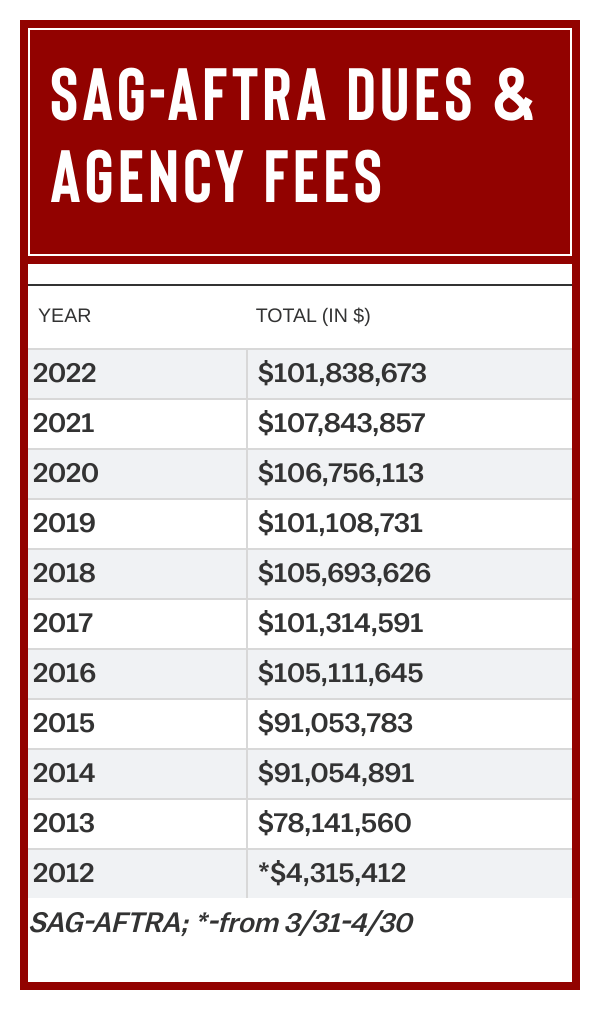 The entertainment industry’s largest union, SAG-AFTRA had a record 171,157 active dues-paying members as of April 30, 2022, the end of its last fiscal year. That’s up by nearly 6,000 members from the year before.

Even so, the $101.8 million in member dues and non-member “agency fees” it collected during the past year was down by more than $6 million from the prior year, largely because of dues extensions provided to members during the pandemic. Dues are by far the guild’s largest source of income.

Those membership numbers, however, don’t include financial core non-members, also known as “agency fee payers,” whom SAG-AFTRA has said “are viewed as scabs or anti-union by SAG-AFTRA members, directors, and writers – most of whom also belong to entertainment unions.”

As of its most recent report, the guild had 4,486 financial core non-members – numbers that have been steadily rising over the past 10 years, and more than doubling since 2013. Even so, their numbers are only 2.6% of active members, which is said to be low for many unions across the country. Financial core non-members pay only that portion of union dues that go directly toward covering the costs of collective bargaining, contract enforcement and contract administration, but they don’t have to pay that portion of dues the guild spends on lobbying or political activities.

Their dues reduction is minimal – less than 5% – and they can’t vote in union elections or run for union office. They also can’t claim to be members of the union on their résumés or headshots. But they can work on non-union shows and cross picket lines during strikes without being sanctioned.

Some go “fi-core” so they can work on non-union shoots, but others say they do it for political reasons – they either don’t like unions in general or don’t want to pay for their union’s political activities.

SAG-AFTRA reports that during the past year, it spent $1,097,586 for “political activities and lobbying” in support of legislation beneficial to its members. The guild, however, does not endorse or contribute to political candidates.

The guild’s single biggest expenditure over the past year – as it always is – was for representational activities, which at $96 million was up from $71.8 million in the prior year.

The guild’s financial reports – known as LM-2 reports – show that gross salaries paid to its employees totaled $42,963,561 during the past year. Duncan Crabtree-Ireland, the guild’s national executive director, is its highest-paid staffer, though a sizable portion of the $989,700 he received in pay last fiscal year was from accrued vacation and time off owed to him in his prior posts at the guild.