Ryan Seacrest and Kelly Ripa fans are going at it in — where else — the comments section.

Fans of the “American Idol” host, 47, are blasting Ripa, 51, for being “rude” to him during a recent episode of their Emmy-winning morning talk show “Live with Kelly and Ryan.”

Seacrest shared a video with his 5.9 million Instagram followers earlier this week — and fans raced to the comments section to drag his co-star for perceived offenses.

“You need to tell Kelly to stop interrupting you. That’s very rude,” one disgruntled fan sniped. “She does it throughout the show … every show. Very annoying. The show’s ratings go up because of you. She is a boring host.”

Another vilifying viewer concurred, “Very annoying. The show’s ratings go up because of you.”

Yet another hater piled on to declare: “I agree one million percent. It would sure be nice to hear Ryan finish a story. I started noticing that too, she never use to do that, seems it started after they got back in the studio, you can tell Ryan just kind of holds his breath,” another fan noted.

“I hate when she talks about herself,” another Seacrest loyalist said. “She goes on.. and on…she brags too much. Not everyone wants to [hear her] story. We’d like to hear from Ryan, too.” 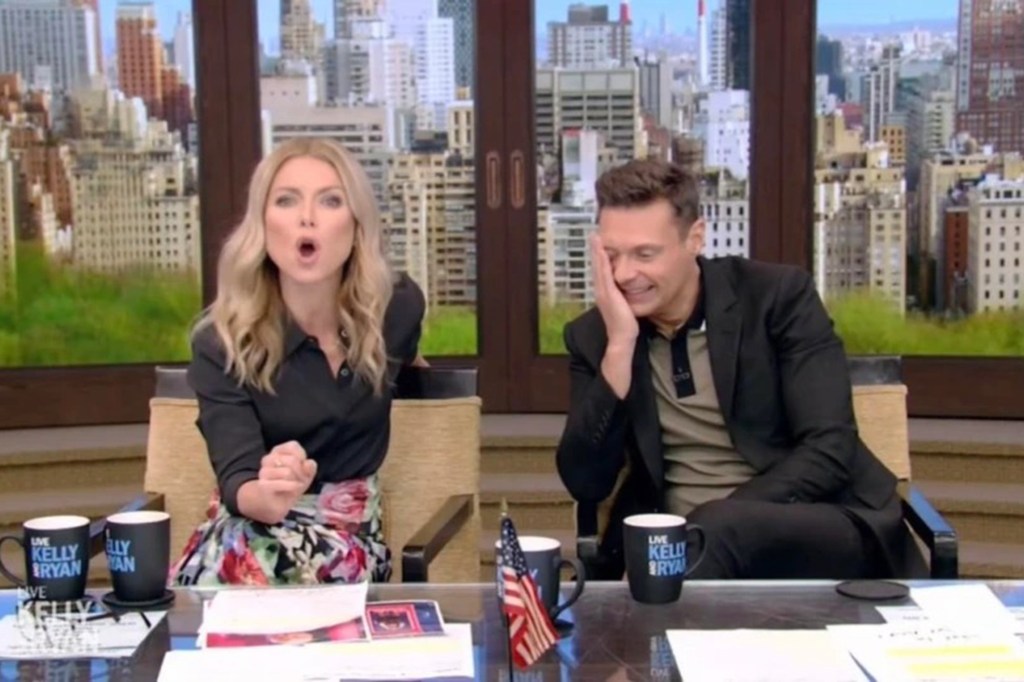 “It would sure be nice to hear Ryan finish a story,” one fan wrote on social media. NBC

Meanwhile, plenty of Ripa defenders braved the fray: “I’m sorry but I don’t agree that Kelly is a bad host,” one commenter proffered. “I watched her & Mark on the soaps . Always liked her . She might interrupt but her & Ryan are friends . They make a good show .❤️❤️.”

The Post has reached out to reps for both Seacrest and Ripa for comment about they catty social media debate.

Speaking of “talking about herself,” during Tuesday’s episode of “Live! With Kelly and Ryan,” Ripa discussed the idea of having joint bank accounts with her husband Mark Consuelos. She explained to Seacrest that studies show that the strongest relationships are those where the couple shares accounts.

“I mean sometimes I’m like, ‘Is it for us?'” referring to her and Consuelos.

She also admitted that she does not have a prenup with the former “Riverdale” star and recalled telling her three kids — Lola, Michael and Joaquin — that they had one when they asked her about it.

“No, because when we married we had nothing, so we put both of our nothings together, we combined our nothings,” Ripa said. “And we were happy, and we’ve been happy ever since,” the “All My Children” alum went on.

seacrest annoying kelly being
Read The Rest at
nypost.com What is pancreatitis? Explaining Travis...