EXCLUSIVE: As India grapples with its devastating Covid wave, the film industry is on pause once again, with production stopped and cinemas closed. As and when the nation emerges from this tricky period and the industry gets going, audiences will turn their attention to the year’s biggest releases, which will hopefully reinvigorate the big screen experience once it is safe to do so. There is no more hotly anticipated release on the calendar in India in 2021 than RRR, the latest film from Baahubali filmmaker S.S. Rajamouli, arguably the most successful director working in India right now.

Mega-budget Telugu-language action pic RRR revolves around two legendary Indian revolutionaries and their journey to fight for their country, and will star both N. T. Rama Rao Jr. and Ram Charan, two of the biggest names in Telugu cinema.

Deadline got on the phone with Jr NTR recently from the set of the movie to discuss how things were progressing. Since our chat, the production has been forced to close down again due to the Covid resurgence, with only a handful of sequences left to shoot. Yesterday, Jr NTR revealed he had also tested positive for Covid, but confirmed to us as well as in a tweet that he is “absolutely fine” and was isolating with his family under the supervision of doctors.

The RRR team are optimistic the film will still be finalized well in time for the October 13 release time, once production recommences. Below, Jr NTR tells us about his pandemic experience, what we can expect from RRR, and how he hopes the film could be cinema’s savior.

DEADLINE: How has this pandemic been for you?

JR NTR: It’s been pretty frustrating. I was 17 when I starred in my first movie. Since then, I have always been someone who likes working 365 days a year. I’m such a workaholic that being caged at home was the last thing I wanted to happen.

On the brighter side, I have these beautiful little kids, and I’ve had time to unwind and connect with them. I’ve also been able to spend time with my mum, my wife, my cousins. It’s been a mixed bag of emotions. When we went back to work, we went back strong.

There’s such a wide range of movies for people to watch these days, especially on OTT, and what people are looking for has changed. This period has allowed me to reanalyze and reboot myself for the coming days.

DEADLINE: Let’s talk about RRR. Is it pronounced ‘RRR’ or ‘Triple R’?

JR NTR: It’s basically RRR, but you can call it Triple R.

DEADLINE: I read on one hand that’s it’s an abbreviation for the three names behind the film (Rajamouli, Rama Rao, Ram Charan), but I also read separately that it means ‘Rise, Roar, Revolt’…

JR NTR: It started off with our names, a quirky way of us getting together and making the biggest multi-star film India has ever seen. It was just a working title, but it got so famous, at some point Rajamouli thought, ‘why not name it Triple R’? Then he came up with the abbreviation Rise, Roar, Revolt.

DEADLINE: When did the production journey begin? 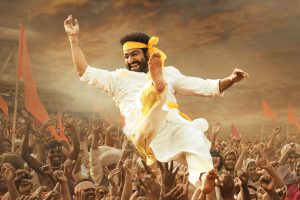 JR NTR: November 2018. It has been a long journey, when you’re dealing with Rajamouli that’s how it’s going to be. This man shot Baahubali for five years, across two parts. On RRR, we were stuck with the pandemic for about eight months, technically we shot for about nineteen months. This film demanded that kind of respect from its technicians. The action sequences are going to leave people flabbergasted. It needed that time to become a film as big as it was expected to be. Rajamouli is a perfectionist and everything must be nothing less than perfect. October is still looking very likely [for the release].

DEADLINE: Did the pandemic impact change the movie in any way?

JR NTR: In terms of the budget, it has not changed, and neither has the story. But the speed we were working at changed once we came back to set. We wanted to rush through the shoot before the pandemic impact was felt again. We worked days and nights.

This industry was one of the worst hit. It is very self-sustained, we do not have a lot of help from the government. It’s like a chain reaction from production to exhibition. But audiences returned to the theaters again [when restrictions were previously lifted] and this gave us a ray of hope.

DEADLINE: Did the makers of this film ever consider releasing it directly onto an OTT platform?

JR NTR: RRR was never considered for an OTT release. There are certain films that need to be enjoyed as a community on a large screen. Would you enjoy watching Baahubali or Jurassic Park or Avengers on OTT? No. We never thought about doing that, we were willing to wait for cinemas. We have a ray of hope, we know people will come back to watch films. India lives on movies. We take them very seriously as audiences. RRR is one such movie.

DEADLINE: Do you hope this film could be the one to reignite cinemas when they return? 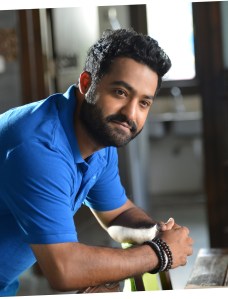 JR NTR: This film is being made by the most successful and focused director in India today. He opened up markets in India with Baahubali – he opened the gates from north to south and east to west, he made the country become one with his films. We never knew that a Telugu regional film would really ring bells across the country, and in China, and America, and the UK. I’m pretty confident RRR is going to be such a movie. Me and Ram Charan coming together for this film is pretty intriguing for audiences.

DEADLINE: Tell me about working with Rajamouli, it sounds intense…

JR NTR: This is my fourth collaboration with him. We started together in 2001 when I was still a naïve actor and he was a naïve director, but he had big ideas of achieving something in Indian cinema. Nothing has changed, he is the same guy, he’s one big task master. The way he gives his actors scope to perform, you know that this is the best thing you’re doing ever. I felt it back then and I feel it now. I gave him the nickname ‘Jakkanna’ – a famous sculptor down south who is known for his immaculate masterpieces. He is a tough taskmaster too, and that’s how Rajamouli sculpts his movies.

It’s a joy to work with him. Not because I’m part of this big movie, but because I’m very proud of how such a close friend has achieved so much. He needs that respect, he gives you incredible opportunities as an actor or technician.

DEADLINE: Your character is based on a real revolutionary, to what extent did you research the real person? Is there added pressure filling the shoes of a real-life figure?

JR NTR: Absolutely. The heroes we’re talking about are still being introduced to the wider India. These characters were locally sung heroes. The task is to show the country and the world what they were and what they achieved. We had major research going on. We knew a bit about them growing up as kids because they were our local heroes. When we had to portray them on screen we had to go over a lot of their lives. I am now telling the stories of these characters to my kids, they live on through our memories. Physically, we had to look a certain way, we had to work our assess off.

DEADLINE: Did you have to do a lot of training?

JR NTR: I was put on a hectic training program for about 18 months. I had to achieve the right physical appearance. I was 71 kilos before that for another film, and I had to gain about nine kilos of muscle mass.

DEADLINE: How did you keep that up during lockdown?

JR NTR: [Laughs] We had finished a lot of that work. When I was in lockdown I didn’t have to keep it up as much.

DEADLINE: Anything more you can tell us about the film?

JR NTR: I really can’t tell you anything more, if Rajamouli reads this interview, and he’s definitely going to read it, he’s going to run behind me with an axe. Every action sequence of RRR has been designed to make the audience go, ‘wow’, and to push them off their seats. I can’t reveal more.

DEADLINE: In recent years we’ve seen international cinema, non-English-language films, travel more widely around the world and find new audiences. Indian cinema is very self-sustaining, but for example Baahubali made a lot of money in international markets such as China, is that something that you’re thinking about more?

JR NTR: Baahubali has opened the doors to the world. There was also a movie called Dangal that did fantastic numbers in China. The gates have been opened to different parts of the world, I think it’s fantastic. But not every movie can travel. As an actor, when you have an opportunity to tell the story to everyone, why not?

DEADLINE: What else do you have coming up? I have heard that you’re making a new movie with Koratala Siva.

JR NTR: Me and him did a previous film called Janatha Garage, which was a big blockbuster. We are getting back together post RRR, at this juncture we’re still working on the script, we have an idea. I’m looking forward to that one. And then I have a film with Prashanth Neel, the director of K.G.F., coming up.

DEADLINE: The Siva project is being referred to as ‘pan-Indian’…

JR NTR: I hate referring to it as ‘pan-Indian’, it sounds like a frying pan. We just mean it is a film that can travel into all the Indian languages. It will be released like RRR all over India.

DEADLINE: Do you have any interest in moving behind the camera?

JR NTR: I still haven’t considered that. I am a firm believer in destiny. I am someone who wants to be a part of the story as an actor, definitely not direct. But I would love to produce content. I would like to create content that travels the globe and shares the cultural heritage of India with the world.

DEADLINE: How about working outside of India? Maybe Hollywood?

JR NTR: Why not? If there is an opportunity for an actor of Indian origin to be in world cinema then absolutely, it would be a great thing to do. India as a country had a lot of inhibition before but it is progressing now in terms of talent and films.

DEADLINE: Are you working with the steaming services?

JR NTR: I haven’t started yet because things have been so crazy with RRR and the pandemic. But who knows how the future is going to be. I think we will start talking. How to shop at Istanbul’s iconic Grand Bazaar...