PHILADELPHIA — Robin Salo lost out on the opportunity for his first NHL goal Monday night, but on Tuesday the Islanders rookie defenseman left nothing to chance.

Salo seemed to have scored his first goal in the second period Monday as the Islanders beat the Flyers at UBS Arena. The official scorer, however, determined that Casey Cizikas had tipped Salo’s shot from the point before it found the back of the net.

So, just 2:08 into the Islanders’ 4-3 shootout win over the Flyers on Tuesday night, Salo skated into the offensive zone and ripped a slap shot past Carter Hart. No need for a deflection.

“Really good feeling,” Salo said following the victory. “And obviously even better feeling that we won the game.”

Salo’s staying power in the NHL has been a welcome surprise in the wake of Ryan Pulock’s injury, which has forced the star defenseman to sit for weeks longer than originally diagnosed. Salo, a 23-year-old from Finland, has averaged 17:26 per game, settling into a role paired with Andy Greene after some initial stumbles. 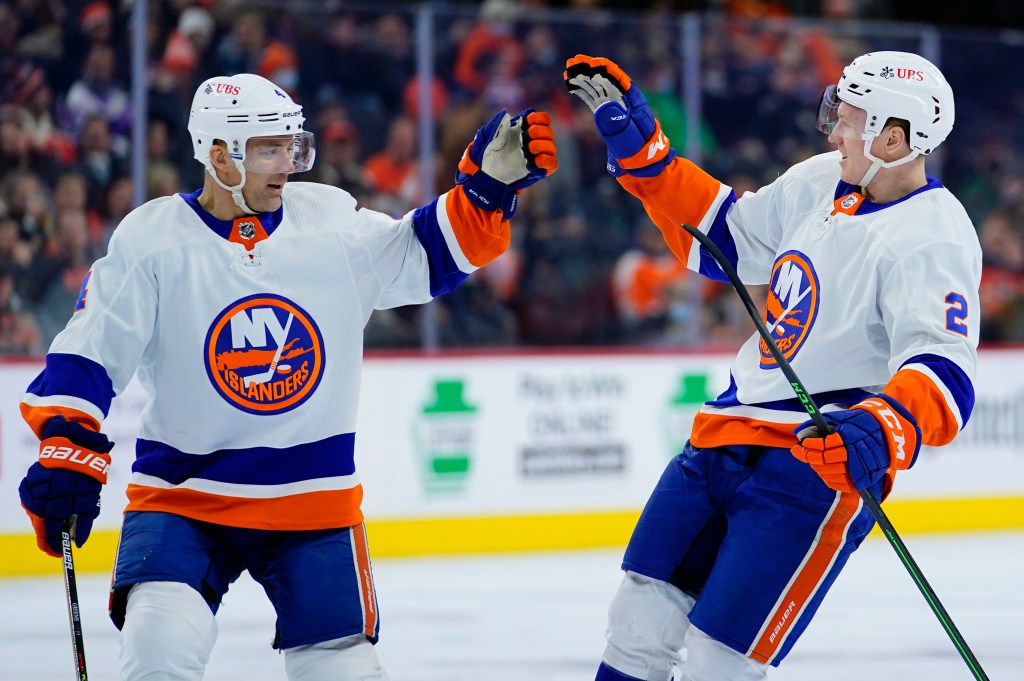 “Obviously feels good to play,” Salo said. “And it’s a tough league. So I feel like it took some time to get used to but I feel like trying to build some confidence and trying to play better.”

Salo, who got an assist on the Monday goal, notched just the second and third points of his career in the last two days, but he said he thinks he has made the most improvement in his defense.

“Positioning myself in the right spot and playing physical,” he said. “Trying not to allow any team to score any goals.”

That drew a laugh from Cizikas, who was seated next to him, but Salo has forced himself into the conversation for playing time even when Pulock returns. That would not happen without good play on both ends of the ice.

When asked about Pulock’s injury Monday, head coach Barry Trotz said: “It’s a little bit of a curse, but at the same time, it’s a blessing. A guy like Robin Salo’s developing.”

On Tuesday, Salo got more validation on that front — and a moment he’ll remember forever.

“It’s great for him,” Josh Bailey said. “He deserved it. It was a great shot, we were all real happy for him. He’s been gaining more and more confidence, that’s the way it goes.

Trotz said Kyle Palmieri’s rehab from a lower-body injury is at “probably 80, 85 percent.” The forward was injured against the Bruins on Dec. 16 and was originally described as day-to-day.

“He just hasn’t moved forward as quickly as we thought he would,” Trotz said. “There hasn’t been any setback.”

Matt Martin said the NHL’s decision to stop COVID-19 testing of asymptomatic players after the All-Star break is “a step in the right direction.”

The league made the announcement Tuesday, following the lead of other pro and college sports.

“This is the first I’m actually hearing about it, but I think it’s probably a good thing,” the Martin said Tuesday morning.

“From what I understand some of the protocols will change which I think are needed,” Trotz said after the game. “I just went through COVID and I felt absolutely fantastic. So I think the league is adjusting correctly to the demands of this sport but also the changes in these athletes feel good.”

The 90-day testing “holiday” for those who have recovered from COVID-19 will remain in place.