Back on May 3, after Tom Wilson body-slammed Artemi Panarin, flexed in the penalty box, and was finally sent off the ice by a confounded officiating crew, the Capitals’ recidivist headhunter stormed down the locker room corridor at the Garden to continue his humiliation of the Rangers.

“They’ve got no one for me!” Wilson screamed, according to a well-placed observer.

Five-plus months and a season later, the Rangers sure do now. Or did you sleep through the summer and miss the additions of Ryan Reaves, Barclay Goodrow, Sammy Blais, Dryden Hunt, Patrik Nemeth and Jarred Tinordi, all of whom are expected to be in the lineup for Wednesday night’s made-for-Turner TV opening match in Washington.

Let’s get this straight. The 82-game schedule is not a 1-plus-81-game exercise. This is not a stand-alone challenge for the Blueshirts as they embark on a new era under the direction of president-general manager Chris Drury and head coach Gerard Gallant. The two points at stake could come in pretty handy down the road.

But, no matter how much the Blueshirts doth protesteth following Tuesday’s prep work at the practice rink, it sure seems that way. Why else would Tinordi, ostensibly the club’s seventh defenseman, replace Nils Lundkvist, a likely candidate for the Calder Trophy, for this one? Why else would Hunt, signed ostensibly as a depth winger, move up to the third line in place of Julien Gauthier?

I’ve got to say: I’m a bit ambivalent about this. For the most part, the Rangers have done just fine playing it straight up against the Caps the past few seasons. They actually had won four of the first six last season before losing both of the final burlesque shows that spun into looney-toonville. The Blueshirts went 2-1 against Washington the previous season and 0-1-3 in 2018-19.


Hence, 6-6-3 in the three years with David Quinn behind the bench. Not too shabby considering the Caps finished an aggregate 54 points ahead of the Blueshirts through that stretch. Talent can rule, as it did on the March 2020 night when Mika Zibanejad scored five goals in the Blueshirts’ 6-5 overtime victory at the Garden.

But I also know that Wyatt Earp, his brothers and Doc Holliday did not mosey into the OK Corral with butter knives in their holsters for the gunfight with Ike Clanton and the Cowboys on a late October day 140 years ago. 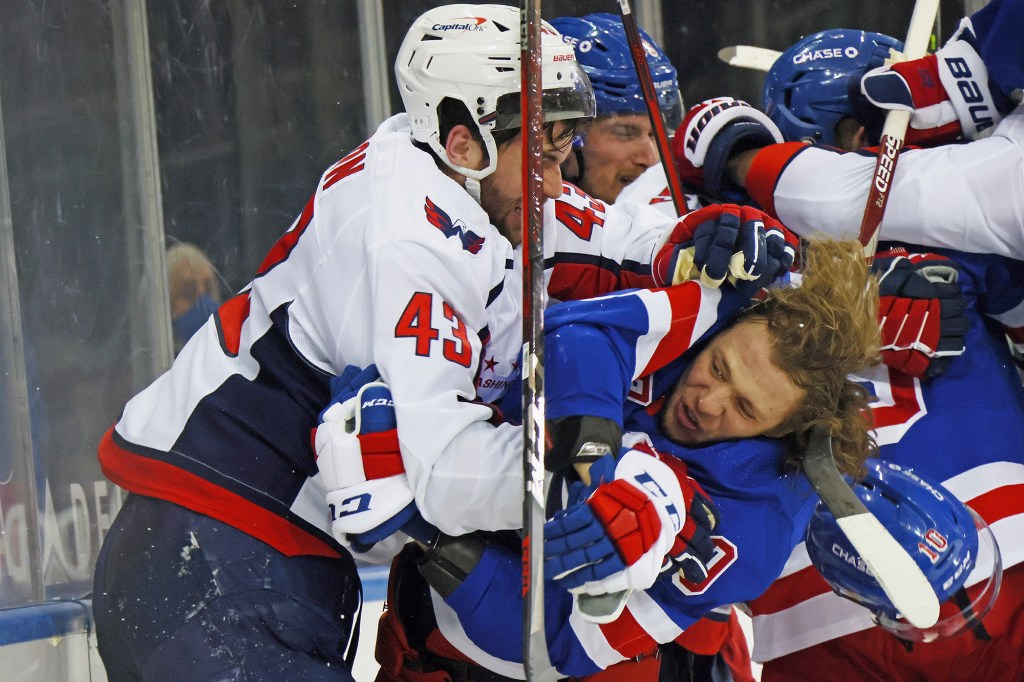 Tom Wilson manhandles Artemi Panarin in a game between the Rangers and Capitals last year.AP

Tinordi in for Lundkvist? Do you think the hierarchy is not aware that the 29-year-old, 6-foot-6 defenseman challenged and fought Wilson in Boston last March 5 in just his second game with the Bruins after being claimed off waivers from Nashville after Wilson concussed Brandon Carlo with an elbow to the head delivered from behind. The play was not penalized — anyone detect a pattern here? — but Wilson was soon suspended for seven games after pressure was exerted by Gary Bettman.

The Rangers have muscled up and forgive them if they want to flaunt their stuff. The Blueshirts did band like brothers for the May 5 rematch that immediately followed abdication of responsibility by the NHL and its department of player safety by refusing to suspend Wilson; the statement fired off by the franchise’s incensed owner, Jim Dolan, who called for vice president of player safety George Parros’ job; and the firing of both president John Davidson and GM Jeff Gorton. From Monday to Wednesday, these were 48 hours that shook the franchise.

There was the line brawl off the opening draw, with Kevin Rooney, Colin Blackwell and Phil Di Giuseppe all throwing hands at 0:01. During the three simultaneous bouts, Zdeno Chara invited Brendan Smith to go, The Post was told. But Smith declined, telling Big Z that he was waiting for Wilson.

So Smith went after Wilson at 0:50 and fought him, picking up an instigator for his trouble. At 4:14, there were two more fights involving Ryan Strome and Anthony Bitetto. Six in all for the period. Six in all for the game that appears to have been some sort of cathartic exercise for the group.

Eight of the Rangers’ 18 skaters who played in that one won’t be in the lineup for this opener and six who will skate in this one have not yet worn the Blueshirt. Doesn’t matter. There is institutional memory within the confines of the room. There is eagerness to put the past just there. These Rangers aren’t going to wear white collars to the dance.

Instead, they are going to flaunt their stuff. “Flex,” might even be a better way to put it. Netflix Reinstates Employees Who Had Been...

6 How to Avoid Keyword Cannibalization