ARLINGTON, Texas — Eleven different pitchers successfully avoided being on the wrong side of history after Aaron Judge hit his 61st home run.

Jesus Tinoco was unlucky No. 12.

Tinoco, the Rangers right-handed reliever who was serving as an opener on Tuesday night, threw the 88 mph slider over the heart of the plate that Judge drilled for his record-breaking 62nd home run in the first inning at Globe Life Field.

Judge pounced on the pitch and deposited it into the first row of the left-field seats to pass Roger Maris for the American League and franchise record.

“We knew it was going to happen and nobody wants to give it up, but it’s part of the game,” Tinoco told reporters through an interpreter, per the Dallas Morning News. “I challenged him and he hit it. That’s my job. All I can say is ‘congratulations’ to him.”

Tinoco, in his fourth season in the big leagues, had never faced Judge before Tuesday night. He opened the game with a 95 mph fastball that went high before Judge watched an 89 mph slider for a called strike. The next one, he didn’t miss. 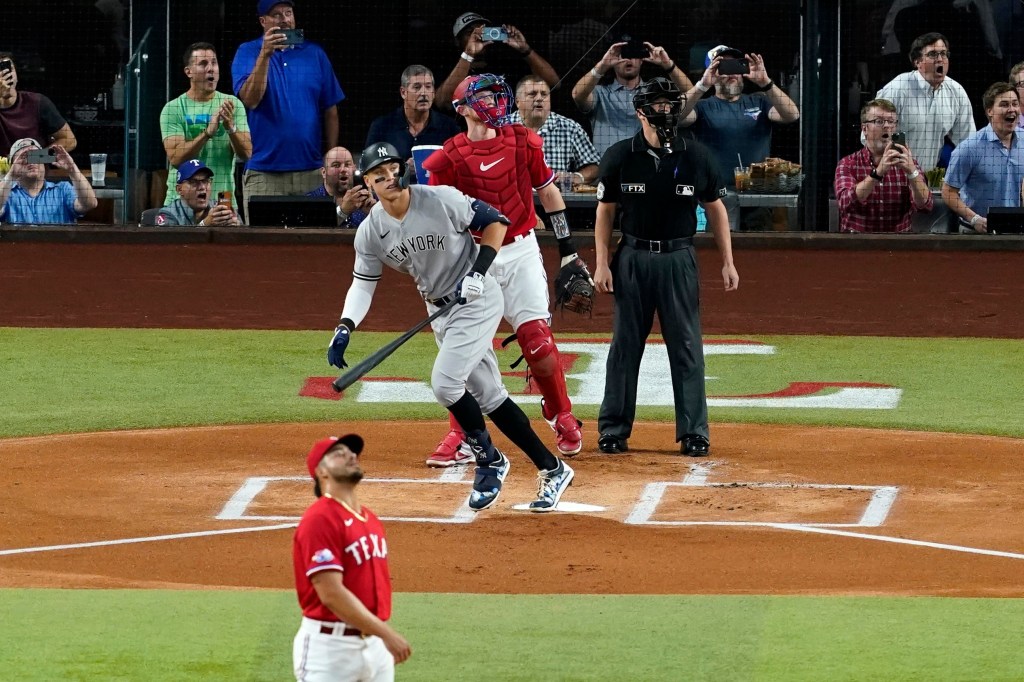 It was only the second home run that Tinoco has allowed this season in 17 appearances spanning 20 ²/₃ innings.

“I know he has a nasty sinker and a nasty slider,” Judge said. “We were kind of waiting to hear who the starter of Game 2 was gonna be. When I heard it was him, I saw what he did the night before and I said, ‘This isn’t a good matchup to start the game off with a guy with high velocity like that and a good off-speed pitch.’ So going into it, I think that helped me relax: ‘Hey, this is a good pitcher. Let me go up there and let’s see what happens.’”

Blue Jays lefty Tim Mayza had given up No. 61 last Wednesday in Toronto. Since then, Judge had gone 23 straight plate appearances without another home run and was suddenly up against the clock in the penultimate game of the season.

But soon after Tinoco ran in from the bullpen to begin the game, Judge wasted little time taking him deep for the historic shot. It came off the bat at 100.2 mph and traveled 391 feet, taking the weight of history off Judge’s shoulders and taking Tinoco with him into the record books. Mets to face Padres in wild-card round at Citi... Matt Carpenter has shot to be on Yankees’...