The four-game road trip out west may not have ended the way the Rangers had hoped, but the club picked up five of a possible eight points and should return home in a position to build on its recent play.

Going 2-1-1 indicates it certainly wasn’t perfect. The Rangers are still enduring the occasional awful period that prevents the team from being satisfied with its 60-minute effort. Sometimes, usually with the help of goalie Igor Shesterkin, the Rangers are able to come out unscathed — like they did in the second period against the Kraken on Thursday. Other times, they have to work that much harder to make up for it, such as the two-goal hole they had to dig themselves out of after a flat opening frame Tuesday against the Kings.

The Blueshirts need to eradicate — or at least limit — these lopsided periods from their repertoire. It’ll count them out of too many games or run the team ragged as they try to compensate.

Their trouble finishing followed them from city to city. So many posts were hit. So many shots went just wide. So many bounces just did not go in their favor. Masking their frustrations with their poor puck luck went better some nights more than others, but when their irritation came through, it only made that black rubber disc stingier. 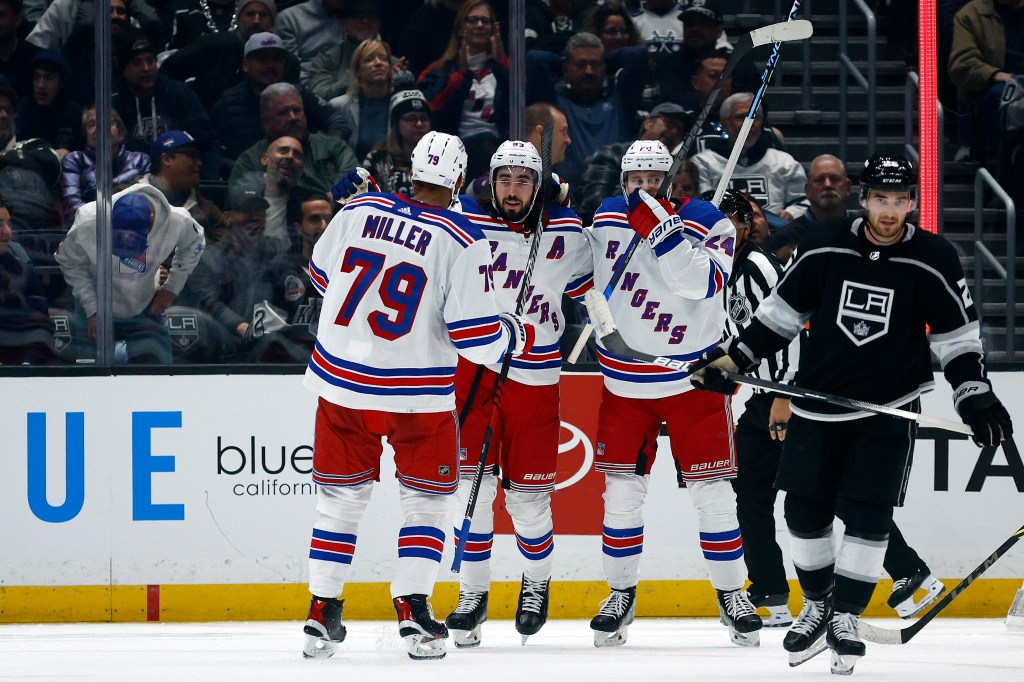 Losing to the Ducks, who are in the basement of the entire NHL, cast a bit of a shadow over the positives the Rangers should be taking away from the trip. Anaheim hadn’t won a single game in regulation until the Rangers came to town.

“We had four or five empty nets that [Ducks goalie John Gibson] made some type of save on,” said Mika Zibanejad, who posted a goal and three assists in the four games. “[Forty-three] shots. I don’t know, it’s frustrating. Yeah we don’t play our best game, but we create enough chances, we do enough, but the puck doesn’t want to go in. At least [Wednesday night]. Gibson comes up with some really big saves for them. It’s frustrating.”

The Rangers started to get some five-on-five scoring from their top six, especially in the 5-3 win in Los Angeles on Tuesday. Barclay Goodrow, Vincent Trocheck, Kaapo Kakko and Chris Kreider all broke through. It may not be nearly enough, but it’s a place to start.

There’s been so many instances where their star players are centimeters off from a goal that, with some mental perseverance, the Rangers top two lines should be due for a surge any game now.

It was also encouraging to see some fight in the Rangers. In two of the four games, they rallied from behind to either a win or to force overtime. The second period of the game against the Kings, when the Rangers scored three in a row to erase a two-goal deficit, is probably a contender for one of their better 20 minutes of the season.

What was even more impressive was the way they remained composed after LA tied it up again just over six minutes into the third, which Kreider answered with two goals to secure the win.

“This is how you build things,” captain Jacob Trouba said after the come-from-behind win over the Kings. “Fighting through adversity, fighting through being down two, hanging on to a one-goal lead going into the third on the road in a pretty good building. Those are the kinds of things that build a team. I think we’ve — I don’t want to say stumbled a bit early but — had some tough breaks. Had some games that we didn’t get the result we wanted. I think that does really creep in your mind, but you got to build throughout the season.

“You build your game, you build confidence in the group and the locker room. You kind of build that good feeling and the fun. I think hopefully we’re getting into that because I think guys have been frustrated at times with how we’ve played. I don’t think that’s a secret.

“The team has been frustrated at times as a group, and we continue to fight and play. It was good to get down early and come back and win a game, and feel good and know that we have that in this room.”