ANAHEIM, Calif. — The Rangers simply got goalied in this game against the Ducks, from their side of the ice and the other.

Jaroslav Halak is still searching for his first win in a red, white and blue jersey after allowing a couple soft goals that put the Rangers behind the eight ball in their 3-2 loss to the Pacific Division-trailing Ducks on Thursday night at Honda Center. It put a damper on what was otherwise a successful road trip out west in which the Rangers compiled a 2-1-1 record.

Ducks netminder John Gibson, like in the two teams’ first meeting earlier this season, curbed several grade-A chances from the Rangers throughout the night before finishing with 41 saves in total. From reaching his stick out to block a Mika Zibanejad shot on the power play, stonewalling Kaapo Kakko on a clean breakaway out of the penalty box and everything in between, Gibson gave every Rangers fits from inside the blue crease.

At the other end of the ice, Halak was off and on — but the Ducks capitalized whenever he was off. The second period was particularly all over the place for Halak, who is now 0-5-1 after the loss. He denied Anaheim around the crease whenever traffic built up, in addition to stopping one-time Blueshirt Frank Vatrano on a shorthanded breakaway. 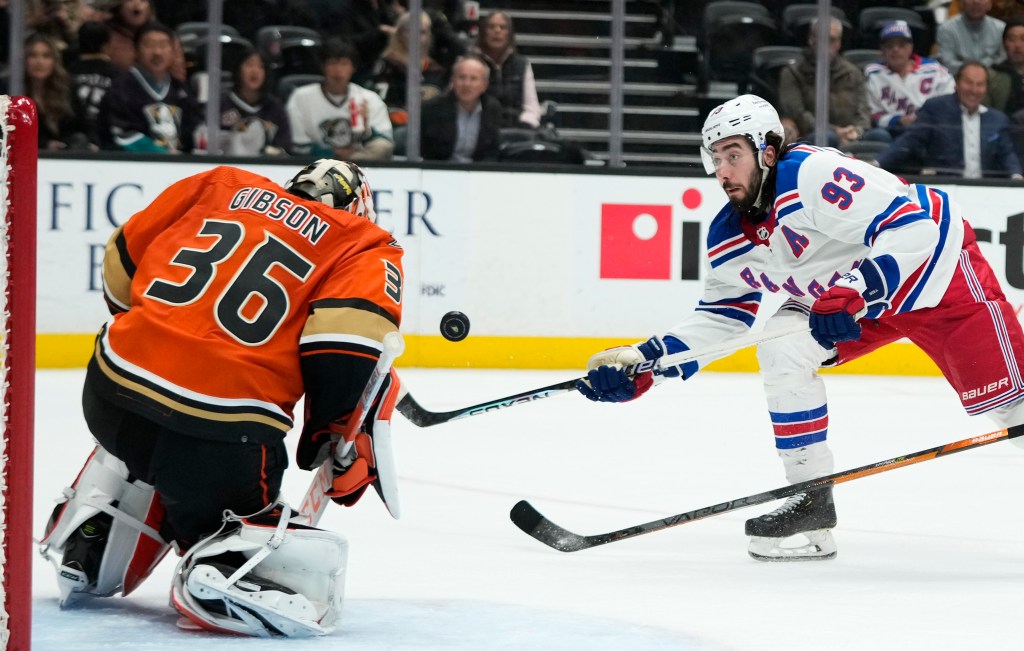 John Gibson makes a save on Mika Zibanejad’s shot during the Rangers’ 3-2 loss to the Ducks.AP

By giving up a pair of weak goals in the middle frame, however, Halak had the Rangers chasing for the rest of the game.

From the boards, Ducks defenseman Dmitry Kulikov flung the puck at the Rangers net and it somehow trickled behind Halak 39 seconds into the second period. Less than five minutes later, Troy Terry sniped one top corner on Halak to extend the Ducks’ lead to two goals.

The 37-year-old Halak has shown flashes of play that make a strong backup goalie, but there also has been some significant gaffs in a majority of his six starts that have cost the Rangers. As an NHL veteran and one who has served in a No. 2 role before, Halak has acknowledged how difficult it is to bounce back from tough games when his playing time is so limited.

Braden Schneider scored his second goal in as many games to pull the Rangers within one at the end of the second period, but the visitors couldn’t net the equalizer in the third despite outshooting the Ducks 17-2 in the final 20 minutes. Vincent Trocheck even whiffed on a loose puck off a rebound on a wide-open net to add to the Rangers’ troubles. 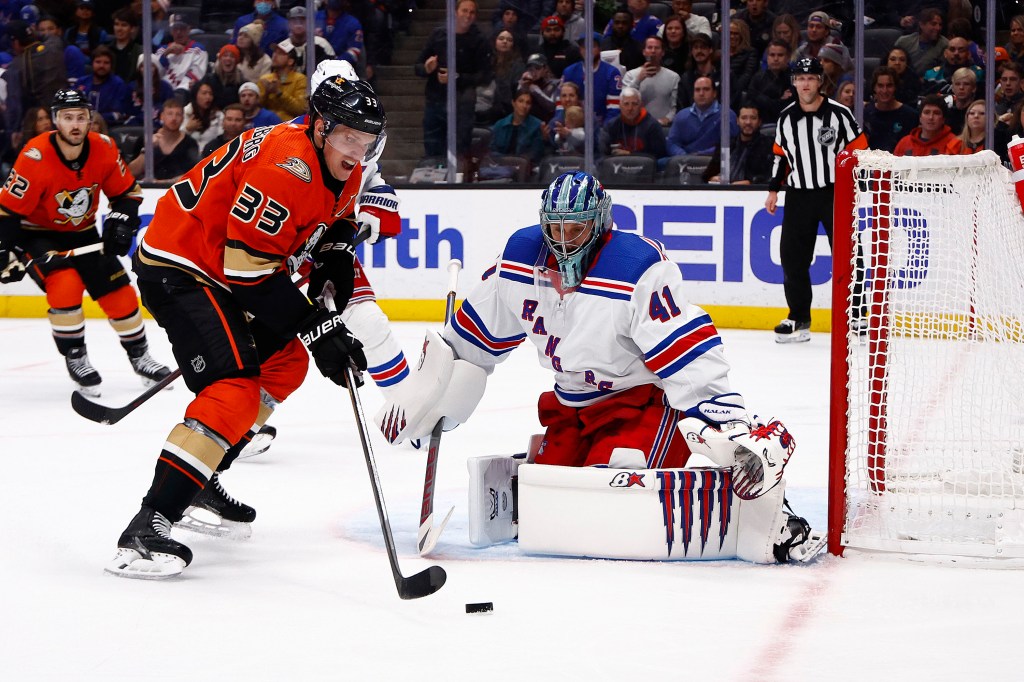 Jaroslav Halak defends the net as the Ducks’ Jakob Silfverberg skates with the puck during the Rangers’ loss.Getty Images

The Rangers may have needed to switch up coasts to progress toward rediscovering their offensive groove, but it’s still not quite there. Plus, the power play hasn’t done them any favors as of late.

The Rangers’ power play has gone 0-for-7 in the last two games they have earned the man-advantage, including a 0-for-4 showing Thursday night. Opponents are anticipating that Mika Zibanejad slap shot in the faceoff circle. They are expecting the no-look pass from Adam Fox. It’s made what is supposed to be one of the Rangers’ greatest strengths that much easier to defend.

The puck still isn’t bouncing the Rangers way, but good teams can turn that around. The Rangers need to prove that much.