It has been 11 straight games without a goal for Artemi Panarin, who told The Post on Friday that, “Motivation is the best thing to have in life.

“So yes, I am frustrated after games, but I wake up the next day with the [objective] that I am going to be better.”

Panarin will open the Rangers’ match with the Oilers on Saturday afternoon at the Garden alongside the linemates with whom he played over the final 22:26 of the 3-2 loss at Anaheim on Wednesday: Mika Zibanejad and Chris Kreider. That alignment has been intact at the start of only four games since Panarin joined the club in 2019-20, two games early in 2019-20 and two contests early last season.

The unit was together for 4:12 against the Ducks and was on for Braden Schneider’s second-period goal. Per Natural Stat Trick, the trio has played a total of 122:11 together while on for 10 goals scored and five against.

Panarin said he doesn’t believe the change was made specifically to get his game going, but rather as part of a change following a defeat. Head coach Gerard Gallant framed it a bit differently after making the decision to separate Panarin from Vincent Trocheck. 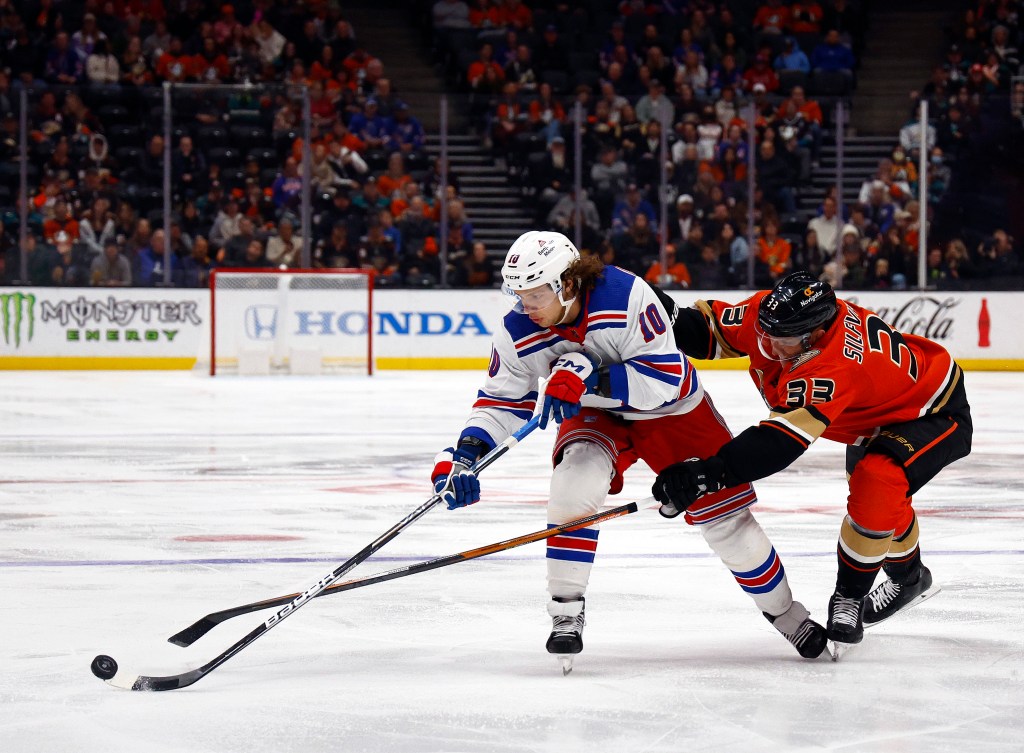 Artemi Panarin has went 11 games without knocking the puck into the net.Photo by Ronald Martinez/Getty Images

“I just wanted to shake things up a little bit the other night and I thought that for the 25 or whatever minutes that they played together, they looked really good,” Gallant said. “So it’s a little adjustment and if we don’t like it, we can switch it back.”

Panarin and Trocheck have not been a bread-and-butter combination through the opening quarter of the season. The two have been on for nine goals scored and 14 against in 254:21 while together. Their styles have not yet meshed.

While Panarin moves up with Zibanejad and Kreider, Trocheck will skate between Jimmy Vesey and Barclay Goodrow on a unit that could match up against Connor McDavid’s line.

“They’re playing fine, but I expect more,” Gallant said of the Panarin-Trocheck partnership. “I think they can be better, there’s no doubt about that.

“It’s [21] games, chemistry doesn’t happen overnight. Sometimes it does, but it hasn’t been great. But again, I’m not disappointed in either player but I just think it can be better. So we’ll switch it around a little bit.

“Kreids and Mika have been really good players for us and Bread obviously puts up big numbers. So we’ll give it a try and see what happens.”

Panarin, who has  seven assists over his last 11 games, has taken 22 shots on 37 attempts over the drought that has followed his fifth and most recent goal, at  Arizona on Oct. 30. The wing has 23 points (5-18), tying  him for the club lead with Zibanejad and Adam Fox.