The gilded stadiums are among the most spectacular in the world. The seafront is sparkling and the skyscrapers are draped with larger-than-life banners featuring the stars of the World Cup.

Fans crowd around big screens throughout the city to watch soccer along the waterfront in Doha, or at the upscale Pearl Marina. Streets are canopied by the national flags of the 32 teams playing in this year’s World Cup, and restaurants are packed. So is the fan zone, where Colombian singer Maluma performed on the eve of the opening game.

The only thing missing is a winning team. 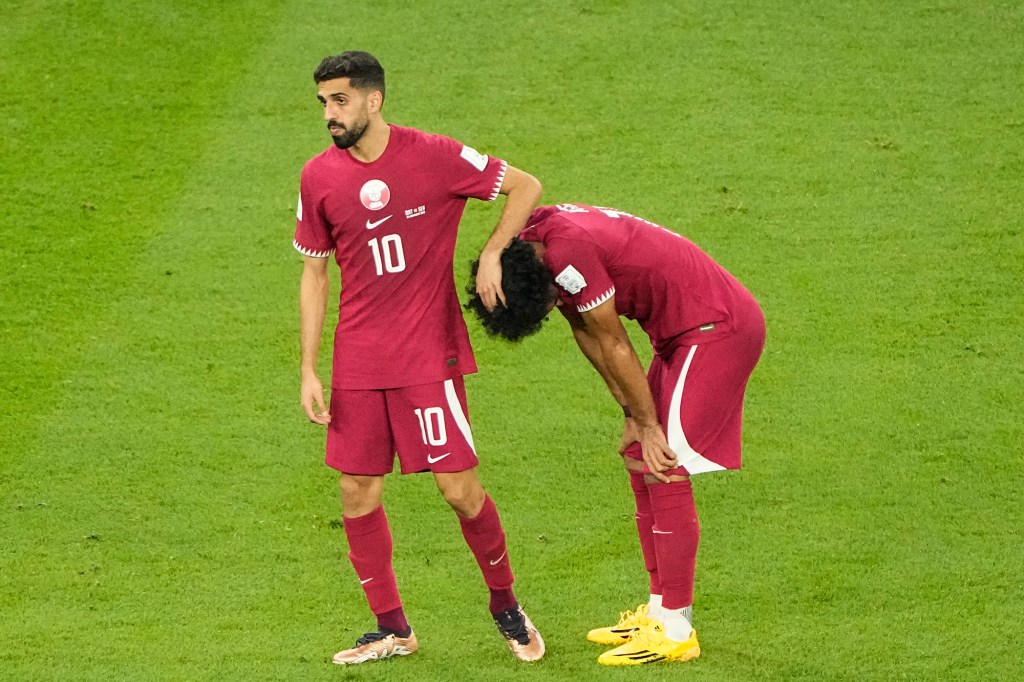 Not Qatar. This time the host was eliminated after just two games — a 2-0 loss to Ecuador in the World Cup opener, then a 3-1 loss to Senegal — to make Tuesday’s match against the Netherlands meaningless for the Qataris.

“I think these players have achieved a great deal over the last years. Now we need to be aware that to compete at this level, we are still lagging behind,” Sanchez said the day before Qatar’s final match. “I think if we work at this on a daily basis, gradually we will be closer to this level.

“I don’t feel disappointed or embarrassed,” Sanchez continued. “The World Cup is the most demanding competition, and only a few can be here. We are still slightly behind. The country will continue working so that the next time Qatar comes to a World Cup — hopefully soon — we’ll be able to compete better than we did this time.”

Qatar spent at least $200 billion on the infrastructure required to host the global soccer tournament. There’s no known figure on what it spent to build an actual team, an endeavor in which Qatar had 12 years to scout prospects, develop talent, and assemble a squad capable of competing against the best in the world. 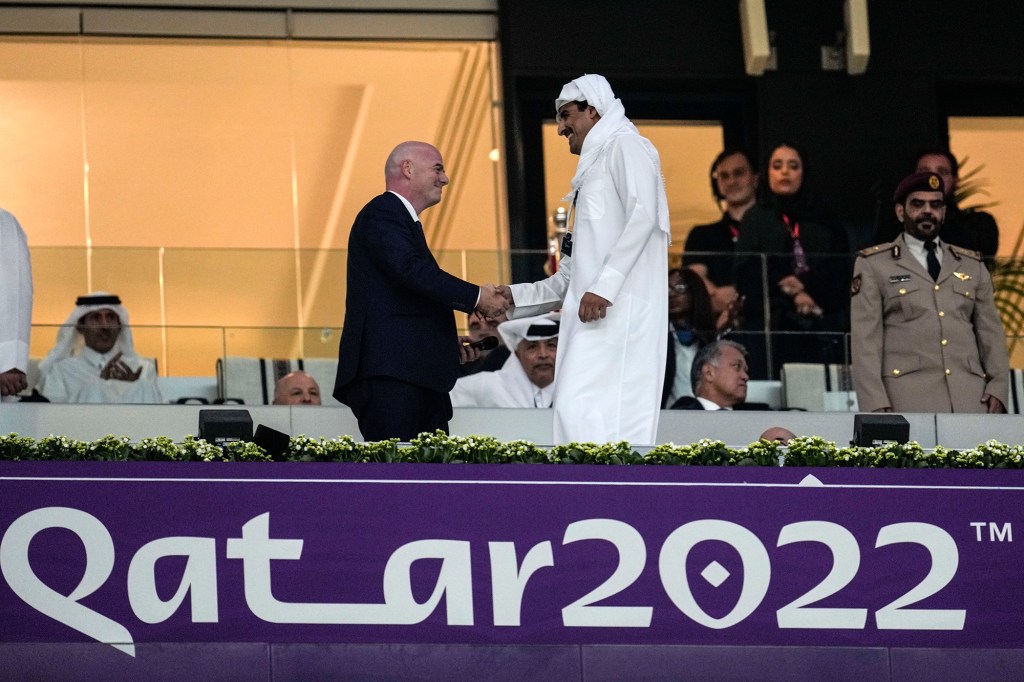 The final 26 selected indeed includes 16 Qatar-born players. But the first-ever goal for Qatar at the World Cup was scored by Mohammed Muntari, who was born in Ghana, and the roster includes players born in Algeria, Bahrain, Egypt, France, Iraq and Sudan.

In preparation for the World Cup, Qatar wooed other confederations to play against its team in an effort to improve. The team received guest entries into the South American and CONCACAF championships, and played friendlies that were loosely attached to qualifying for the 2020 European Championship. It was all tied to Qatar Airways sponsorship and beIN TV rights.

It was not without controversy: Following a 4-0 loss to Qatar in the 2019 Asian Cup semifinals, the United Arab Emirates protested the eligibility of Sudanese-born Almoez Ali and Iraqi-born Bassam Al-Rawi. The case was dismissed when Qatar presented evidence claiming Ali’s mother was born in the country. 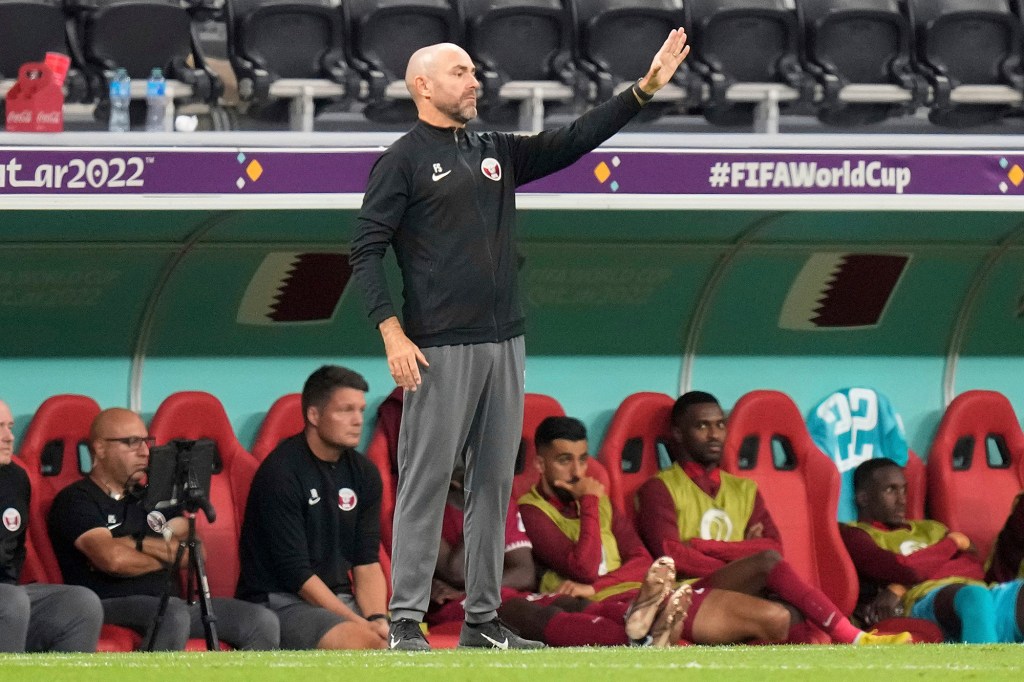 Qatar won that tournament for the first time in its history, beating regional powerhouse Japan in the final.

“To go back 12 years, the vast majority of the Qatari national team were expatriates. Today the vast majority are Qataris,” said Dr. James Dorsey, an adjunct senior fellow at the Rajaratnam School of International Studies in Singapore.

“But it’s a small country. It’s a small pool they can draw from. They are by definition disadvantaged by countries that are much bigger,” he continued. “For those who look at this in purely sporting terms, yes, it is important that they are the first to lose an opening match and to crash out in the group stage. I think in a broader perspective, that’s not going to make a big difference to the government.”

Qatar, which did not play its first official match until 1970 and counts only 300,000 citizens among the population of 2.9 million, did not land the World Cup to win the World Cup.

The tournament instead was meant to elevate the profile of this energy-rich nation like no other event before it. 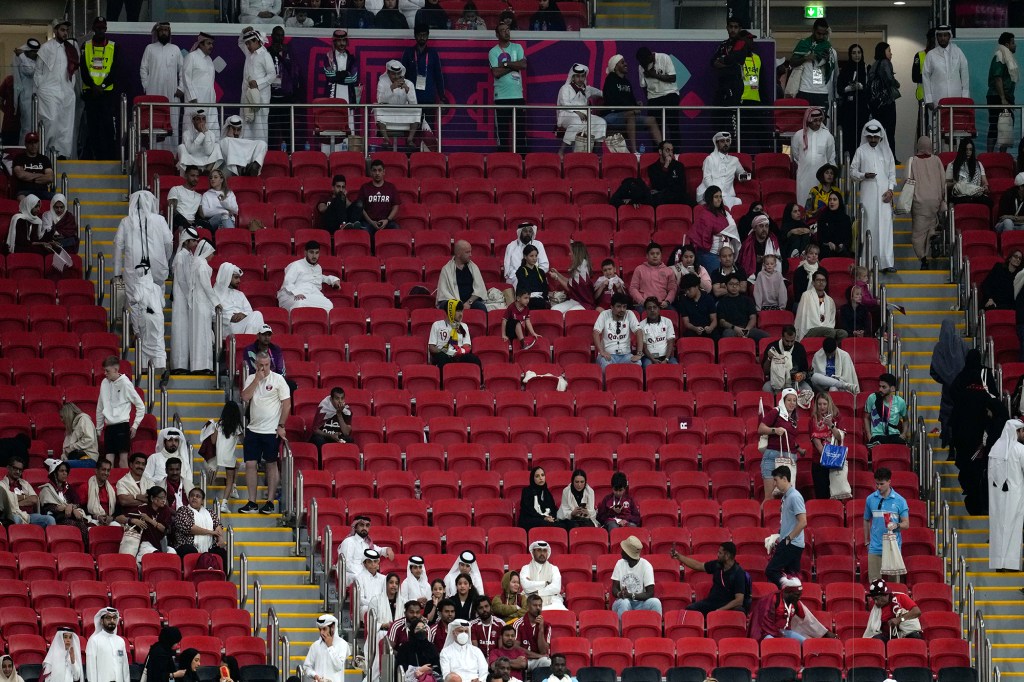 People leaving before the final whistle during the World Cup, group A soccer match between Qatar and Ecuador at the Al Bayt Stadium in Al Khor, Sunday, Nov. 20, 2022.AP

Qatar’s hope was that the tournament improves its relationship with neighboring Saudi Arabia, which only two years earlier had been part of a four-nation boycott of the country. And Qatar cemented its ties with the West as a hedge in case of further political trouble ahead in the volatile Middle East.

“We knew from the start that this was a long shot for Qatar, given their lack of history and given where they were,” said Alexi Lalas, a member of the United States’ 1994 team and now a Fox Sports analyst.

“I think they also look at this as, yeah, it would be nice, but this is still that advertisement to the world,” Lalas added. “Whether their team is in it or not, this is about showing the country and obviously they still have many more weeks here to kind of do that.”

Qatar will host the Asian Cup soccer tournament in 2023, the multi-sport Asian Games in 2030 and is eyeing a bid on the 2036 Olympics. The seven new stadiums — controversially constructed by foreign laborers — will mostly be resized after the tournament and Lusail Stadium, where 88,966 spectators watched Argentina beat Mexico last weekend in the largest crowd at a World Cup match in 28 years, will be overhauled into a multi-use facility. 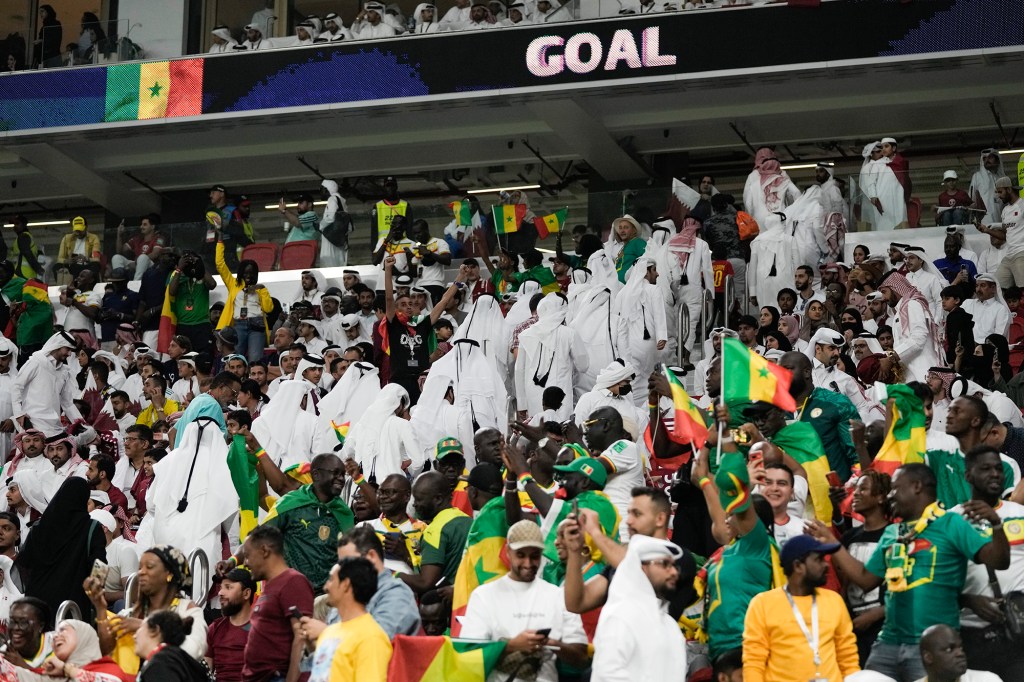 And despite the early World Cup exit, Qatar’s soccer team is expected to continue to develop and grow, and perhaps even someday rival Middle East powerhouse teams including Iran and Saudi Arabia, which both won group-stage matches at this year’s World Cup.

“Of course as a player, we would have wanted the Qatari fans to be proud of us. It wasn’t our fate to win. But thank God we were at least able to score in the World Cup,” Ali said. “This was our first participation in the World Cup. We hope it will not be the last.”

Qatar received an automatic berth as host to play in this year’s World Cup, but will shift its focus toward qualifying for future tournaments through its on-field play. The next World Cup in North America will be expanded from 32 to 48 teams and Asia will get eight guaranteed spots instead of four, making it easier to qualify for the tournament.

Mohammed Abdulrahim, a Qatari who said he was part of the organizing committee for the tournament’s opening ceremony, thought expectations were too big for the young national team. 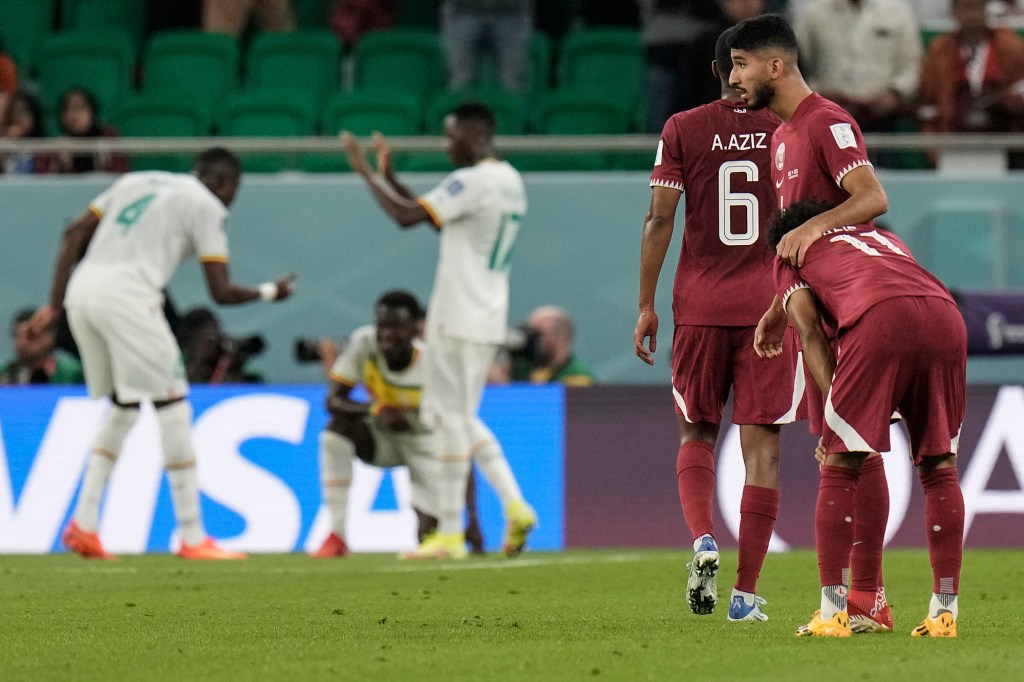 Even with Qatar’s national team being eliminated from the World Cup, the small wealthy Middle Eastern country has made significant strides on the world stage.AP

“That’s why they lost their chance, don’t forget it is their first World Cup and in their country. It was too much pressure… still we are proud,” said Abdulrahim, adding Qataris are enjoying the chance to showcase the country.

“We have a message for all the people: We are people who like peace, we like to make friendship. World Cup for us and the whole Arab world is a chance to see our face,” he said. “I think you’ll see the country how safe it is, that’s a point, that’s a goal. Still we have positive things happening, not negative things happening.”

Dorsey said the verdict is out on whether this tournament met all of Qatar’s goals, but even with the on-field disappointment, the country has made strides.

“I don’t know that the World Cup is a zero-sum game. This is a major accomplishment, but it’s not the end of the game,” Dorsey said. “The Qatar World Cup will have a legacy of social change: workers conditions have improved in Qatar. Whether you think they’re good or bad, or enough was done, is a different question. But it’s the only Gulf state with a minimum wage. Could it have been higher? Absolutely.

“The fact of the matter is, there’s been a number of other of those things, so there has been social change which probably would not have come about without the World Cup,” Dorsey continued. “I think ultimately the soccer team will still perform. Look at China. Football is extremely important to (China leader Xi Jinping) and he’s poured a fortune into it, and they’re nowhere. In that sense, Qatar is certainly further than the Chinese are.”