In an effort to get the Oscar telecast back on track, the Academy of Motion Picture Arts & Sciences today announced that awards show and live television veterans Glenn Weiss and Ricky Kirshner will produce the 95th Annual Academy Awards will will air on ABC March 12, 2023.

Ever since he was named CEO in the Spring Bill Kramer has indicated that the Academy would look to hiring top TV professionals with vast experience, rather than going in past directions in hiring primarily producers who were better known for their work in film rather than staging live television. Recent producers have included Steven Soderbergh in 2021, and last year Will Packer who ran the infamous show with “the slap” that overshadowed everything else.

Weiss will also direct the show, something he has done consecutively done for the past seven years, but this will be only his second time with a producing credit on it. In joining his longtime partner Kirschner the Academy now has a pair with over 30 years of production experience including 21 highly acclaimed Tony Awards shows, The Primetime Emmys, Super Bowl Halftime shows and countless other iconic events. AMPAS is clearly hoping the pair can work their magic on the Oscars.

Kramer, and new Academy President Janet Yang also made the announcement at this morning’s Academy Membership Meeting which was open to all 10,000+ members of AMPAS and the first in what is hoped will be several meetings  designed to promote transparency within the Academy and give members more of a voice in the organization’s direction.

Kramer and Yang also revealed several other key creatives who will be working on the Oscar show this year. They include red carpet executive producer David Chamberline, another live tv veteran; red carpet  creative consultants Lisa Love and Raul Avila who previously did the MET Gala; creative director Kenny Gravillis  who has had a hand in art and campaigns for many movies; and Production Designers  Misty Buckley, a veteran of musical world tours and televised music shows  for Ariana Grande, Coldplay and others, along with Alana  Billingsley who has worked on Oscars, Emmys, and Grammys.

“We are thrilled to have Glenn and Ricky at the helm,” said Kramer and Academy President Janet Yang.  “Their expertise in live television production is exactly what the Oscars needs.  We look forward to working closely with them, our Board of Governors, and the Board’s Awards Committee to deliver an exciting and energized show.  Joining them is an incredible slate of creative partners – David Chamberlin, Lisa Love, Raúl Àvila, Kenny Gravillis, Misty Buckley and Alana Billingsley – who will bring fresh ideas to the broadcast and the red carpet.”

“Bill made us ‘an offer we couldn’t refuse’ but he really ‘had us at hello’,” said Weiss and Kirshner. 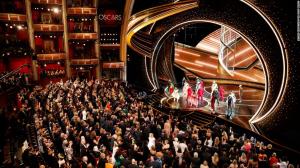 “We couldn’t be more excited to have live event veterans Glenn and Ricky as executive producers of the 95th Oscars telecast on ABC.  Their experience and creativity are bar none, and we look forward to seeing their vision play out for Hollywood’s biggest night,” said Rob Mills, executive vice president, Unscripted and Alternative Entertainment, Walt Disney Television.

Kirshner has more than 30 years of entertainment production experience and has produced shows for every major network.  He has received 26 Emmy nominations and has won nine Emmy Awards, a Peabody Award and an Edward R. Murrow Award.  Kirshner’s credits include many of the most watched and award-winning television specials, including the Tony Awards, 14 Super Bowl Halftime Shows, “Night of Too Many Stars,” “The Primetime Emmy Awards,” “The Democratic National Convention,” Presidential Inaugurals and many others.

Love and Àvila will join the team for the first time to reimagine the Oscars red carpet aesthetic and guest experience.  Àvila is the creative director for the Met Gala, and Love is a creative contributor overseeing various aspects of the event.  They led the creative team for the Academy Museum of Motion Pictures’ 2021 and 2022 galas.

Gravillis joins the team for the first time to conceptualize the key art for this year’s Oscars marketing campaign.  His design agency, Gravillis Inc., recently rebranded Orion Pictures and has developed iconic key art and campaigns for legions of movies, including “Dune,” “Summer of Soul,” “Birds of Prey,” “Queen & Slim,” “BlacKkKlansman,” “Bohemian Rhapsody,” “Free Solo,” “Iris” and so many more.  A member of the Academy’s Marketing and Public Relations Branch, Gravillis also created posters and collateral materials for the Academy Museum of Motion Pictures’ retail store.

Buckley and Billingsley join the team for the first time as production designers – and also the first women-led design team – for the 95th Oscars.  Buckley has designed world tours and productions for such artists as Ariana Grande, Kacey Musgraves and Coldplay, including the band’s Super Bowl Halftime Show.  She also designed the 2021 GRAMMYS, the London 2012 Paralympics Closing Ceremony, the 2015 Rugby World Cup Opening Ceremony, the 2022 Commonwealth Games ceremonies, the Brit Awards and numerous television productions for the BBC and ITV.  Buckley earned a BAFTA nomination for her work with Stormzy at the 2019 Glastonbury Festival and Emmy nominations for her production design of the 2021 GRAMMYS and Disney’s “The Little Mermaid Live!.”  Billingsley was an art director on six previous Oscars broadcasts, for which she earned five Emmy nominations and won two Emmys.  Additional credits include “The Kennedy Center Honors,” “The Primetime Emmy Awards,” “GRAMMYS,” “CMA Awards,” “BET Awards” and numerous other live television productions.

The 95th Oscars will be held on Sunday, March 12, 2023, at the Dolby® Theatre at Ovation Hollywood and will be televised live on ABC and in more than 200 territories worldwide. How to bet Canelo Alvarez vs. Gennadiy Golovkin...