The arguments for NFL parity are as strong as ever.

Eight teams that missed the playoffs last season have won at least two of their first three games: The Ravens, Bears, Browns, Jaguars, Dolphins, Vikings, Broncos and Giants. Nearly half of the league – 14 of 32 teams – has a 1-2 record.

For just the second time since the league went to eight divisions in 2002, 30 teams have at least one win after three weeks, according to NFL Communications. There are only two winless teams – the completely expected Texans and the totally unexpected Raiders – which means 2022 is tied with four other seasons since 1970 for the fewest zero-win teams after three weeks.

Here are The Post’s power rankings for Week 4, with a shakeup at the top after several heavyweights stumbled: 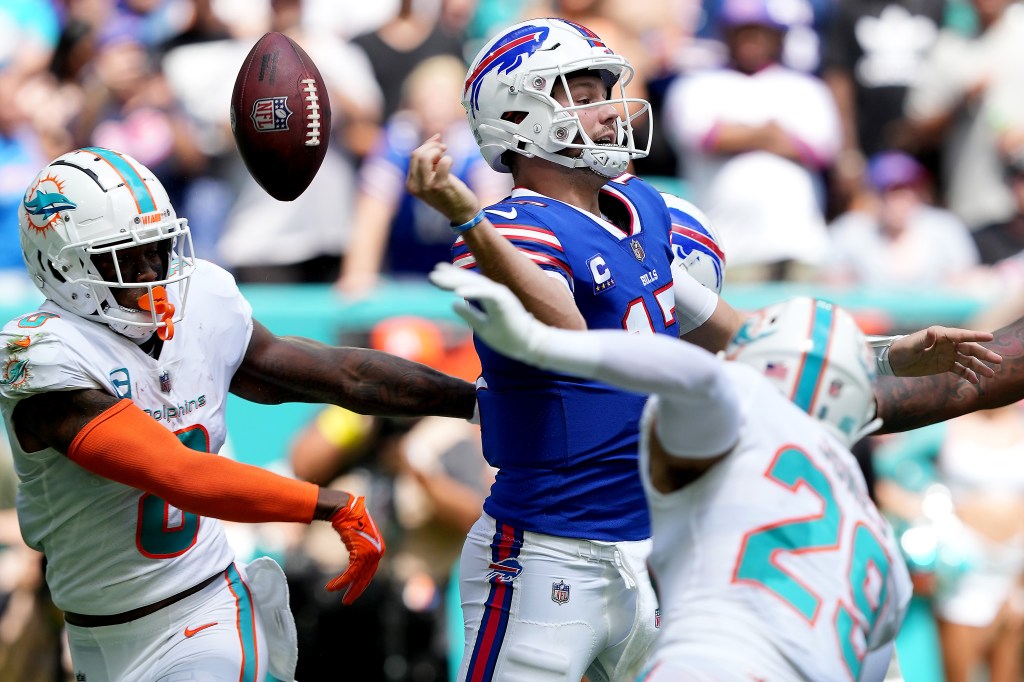 The Dolphins strip the ball from Bills quarterback Josh in their 21-19 victory.Getty Images

Forget proving that he is worthy of being a starting quarterback. Or that he was the right choice to keep over Carson Wentz. Jalen Hurts is an early contender for NFL MVP after throwing three touchdown passes to his three top weapons. The defense held Carson Wentz-led Washington to 50 total yards in the first half of a 24-8 win.

The score is all that matters and the Bills lost to the Dolphins. So, who cares that Josh Allen completed a career-high 42 passes or that the Bills ran an astounding 90 offensive plays or that they more than doubled the Dolphins’ offensive yardage (497-212)? Offensive coordinator Ken Dorsey lost his cool when the clock ran out.

Welcome back, Cam Akers. The once-promising running back bounced off tacklers and scored a touchdown in a 20-12 win against the Cardinals. Akers missed all but one game last regular season and was minimized in the first two games of this season. The Rams are 11-1 in their last 12 games against the NFC West (playoffs included).

The Chiefs kept giving chances to the desperate Colts. Matt Ammendola missed two kicks. A fake field goal failed. Chris Jones committed an unsportsmanlike conduct penalty to negate fourth down and extend what proved to be the decisive drive in a 20-17 loss. Patrick Mahomes and offensive coordinator Eric Bieniemy argued at the end of the first half.

After losing more than their fair share of close games in recent years, the Vikings overcame a 14-point deficit to tie the score and then a separate 10-point deficit to steal a 28-24 win from the Lions. Alexander Mattison and K.J. Osborn – not the expected duo of Dalvin Cook and Justin Jefferson – scored the two fourth-quarter touchdowns.

Aaron Rodgers threw two touchdown passes from inside the 10-yard line and a much-improved defense looked the part against Tom Brady in a 14-12 win over the Buccaneers. This was the first game in NFL history featuring opposing starting quarterbacks with at least three NFL MVPs apiece. Keep this win in mind for NFC playoff seeding tiebreakers. 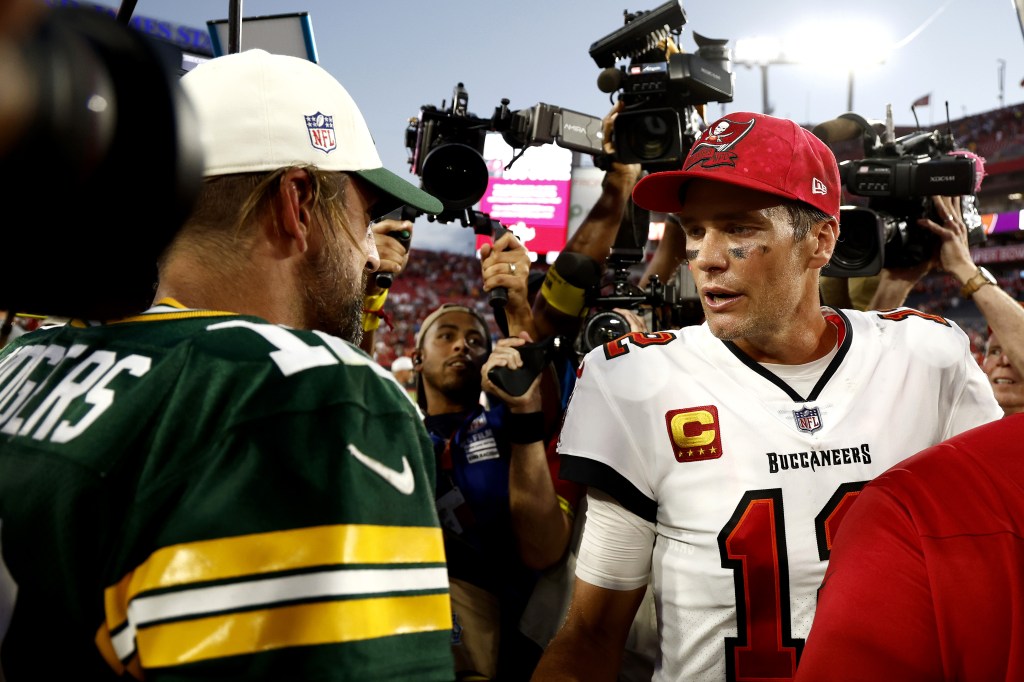 Tom Brady and Aaron Rodgers meet up after the Packers win in Tampa Bay.Getty Images

With Mike Evans suspended and Chris Godwin injured, Brady played with limited weapons – and it showed. For the second straight week, the Bucs didn’t score a touchdown until the fourth quarter. They were held under 200 total yards until the final possession but still nearly tied the defensive struggle with 14 seconds remaining – until Brady’s two-point conversion pass fell incomplete.

In a 37-26 win over the Patriots, Lamar Jackson accounted for five touchdowns (four passing, one rushing) and became the first player in the Super Bowl era with three or more passing touchdowns and at least 100 rushing yards in back-to-back games. Justin Tucker made his 50th career field goal of 50 yards or more.

Cooper Rush really has the magic touch, improving to 3-0 as a starter over the last two seasons. Head coach Mike McCarthy put to bed any Jerry Jones-fueled idea of a quarterback controversy when Dak Prescott returns, however.  The NFC East and NFC North are the only two divisions with three teams above 500. Who would’ve guessed?

The Giants suffered their first loss under Brian Daboll, falling 23-16 to the Cowboys on “Monday Night Football.” The offensive line crumbled, surrendering five sacks and 23 pressures — the most Daniel Jones has been pressured in his professional career. Kenny Golladay again failed to record a catch. 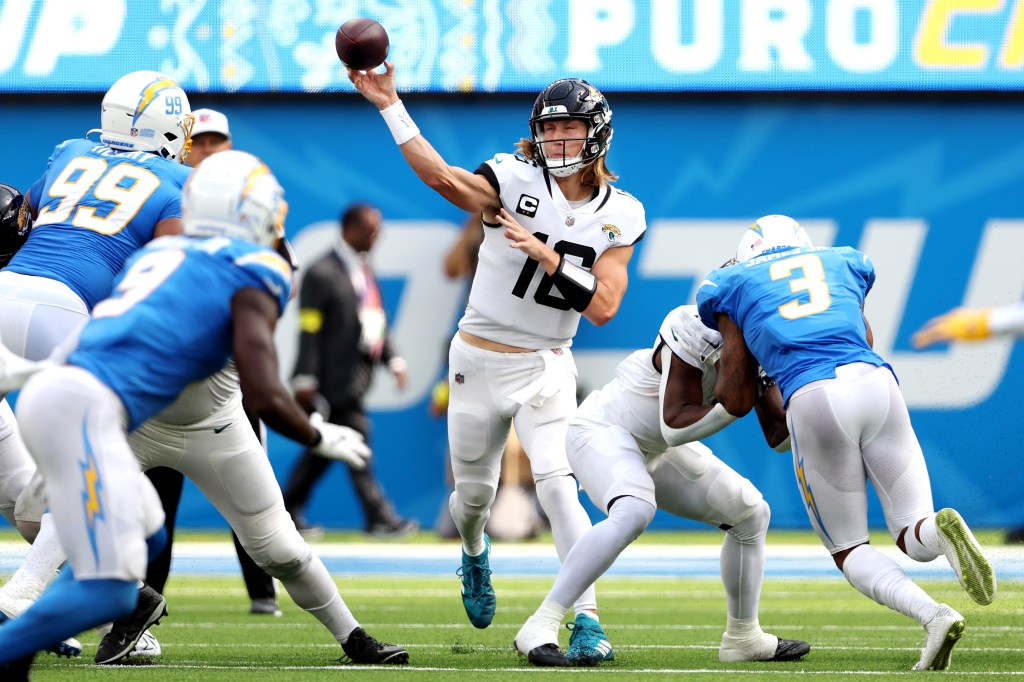 Trevor Lawrence and the Jaguars are 2-1 after an impressive win over the Chargers.Getty Images

How close are the Jets to a 0-3 start after getting trounced by the Bengals? They have held the lead for 22 seconds out of 180 minutes. If not for the miraculous two touchdowns and an onside kick recovery in a 60-second span to steal a win from the Browns, all would be lost again. Zach Wilson is expected back from injury this week.