Tagovailoa was stretchered off the field near the end of the first half of the Dolphins’ “Thursday Night Football” matchup with the Bengals with head and neck injuries. He was sacked by Josh Tupou, and his head forcefully slammed against the ground as he was brought down. After the hit, his fingers could be seen crooked as he remained on the ground, which broadcasters Kirk Herbstreit and Al Michael said is likely a result of neurological shock.

Just four days ago against the Bills, Tagovailoa similarly slammed his head on the ground after a hit. He tried to get up and remain in the game, but collapsed after taking a few steps and was helped off the field. He returned and helped lead the Dolphins’ to a comeback win, but many were skeptical to how he was allowed back in the game, particularly after everyone saw him collapse.

The Dolphins claimed Tagovailoa passed the NFL’s concussion protocols after the Week 3 hit, which are conducted by an independent third party and includes both physical and phycological tests. In addition, despite the team initially ruling him questionable to return with a head injury, the team and Tagovailoa announced after the game that it was indeed his back that forced him to collapse on the field. 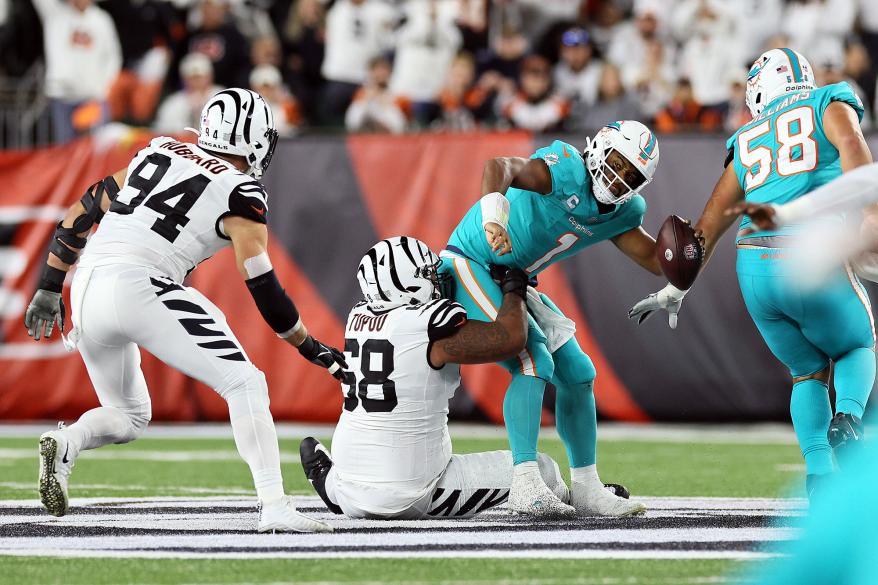 Quarterback Tua Tagovailoa #1 of the Miami Dolphins is sacked by defensive tackle Josh Tupou #68 of the Cincinnati Bengals. Getty Images 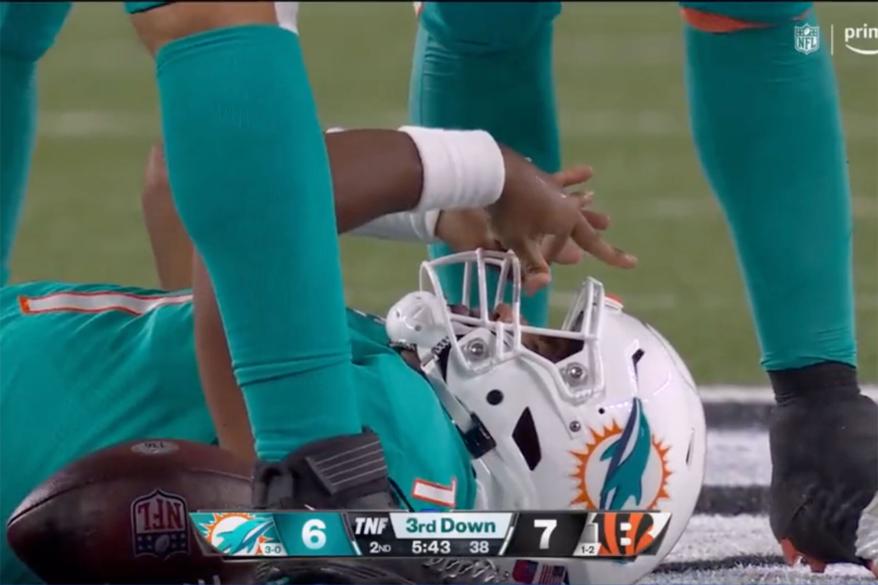 Tua Tagovailoa lies on the ground after his scary hit. Screengrab 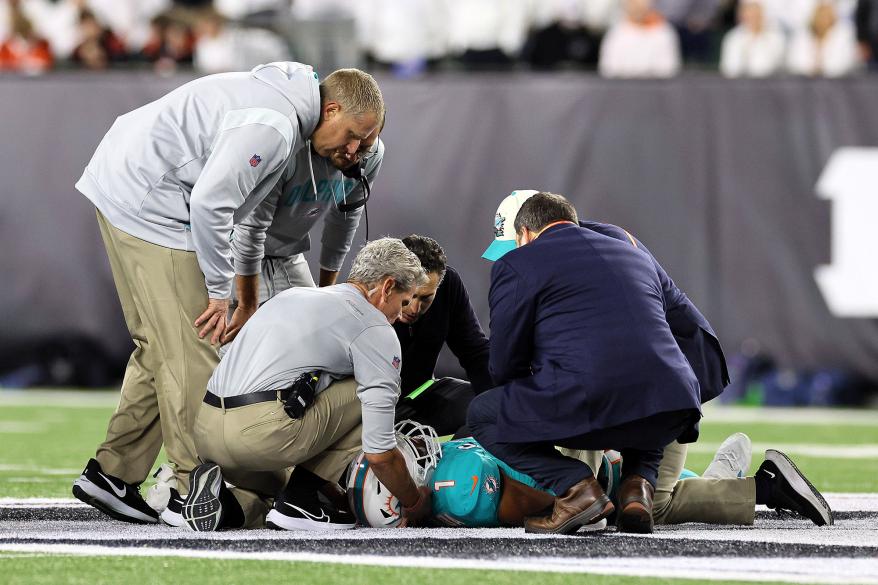 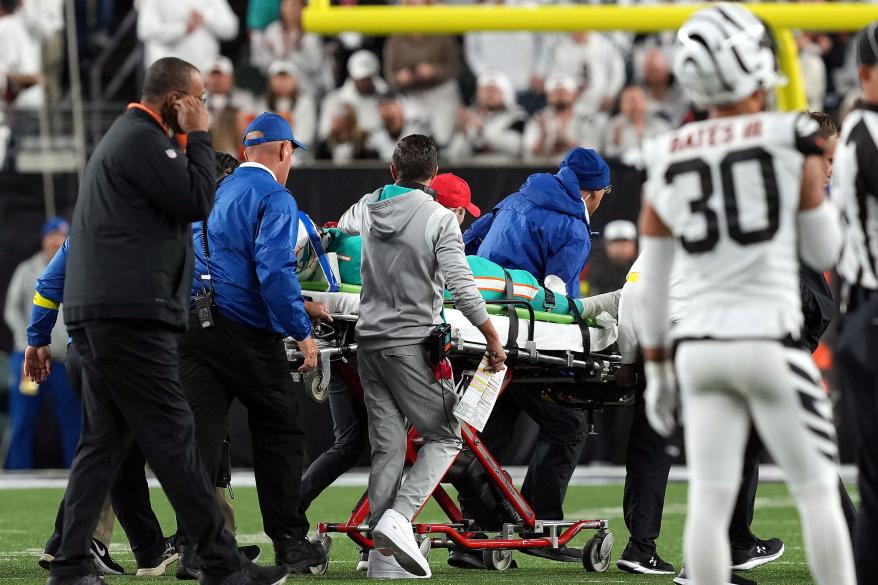 Immediately after that game, on Sunday, the NFL Players Association launched an investigation into the processes that allowed him to return. After Tagovailoa exited Thursday night’s game, the NFLPA again expressed their ongoing investigation into Tagovailoa’s injury, and subsequent clearance, from Sunday’s game.

“Player health and safety is at the core of the union’s mission,” the NFLPA tweeted Thursday night. “Our concern tonight is for Tua and we hope for a full and speedy recovery. Our investigation into the potential protocol violation is ongoing.”

On a short week, Tagovailoa was questionable to play Thursday against the Bengals, and there was skepticism that he should even be allowed to take the field.

Before kickoff, Ph.D. Chris Nowinski, CEO of Concussion Legacy Foundation, tweeted “If Tua takes the field tonight, it’s a massive step back for #concussion care in the NFL. If he has a 2nd concussion that destroys his season or career, everyone involved will be sued & should lose their jobs, coaches included. We all saw it, even they must know this isn’t right.”

With another scary injury, the microscope on the Dolphins and their decision making has only intensified.

This is a disaster. Pray for Tua. Fire the medical staffs and coaches. I predicted this and I hate that I am right. Two concussions in 5 days can kill someone. This can end careers. How are we so stupid in 2022. pic.twitter.com/D8S8eEbgda

"As a player, you've gotta move on, you've gotta play the game. As the announcer, analyst, I’m having a tough time right now." – Ryan Fitzpatrick on — his former Dolphins teammate — Tua Tagovailoa pic.twitter.com/kvmwYA8cu0

Tua is a case of NFL Teams having to protect players from themselves.
Tua is also a case of NFL Players needing to be protected from their NFL Teams.

Truth be told Tua should probably never have been playing.

He displayed neurological trauma last week, we disregarded it, labeled it a “back injury” & let him back in the game.

Now, the whole world watch as he lay on the field helpless. When will we put player safety FIRST!

4 days after this, Tua got knocked down and is in a hospital. Miami had been a great story through 3 games, but this decision overshadows it all https://t.co/7ZE85MsvJs

I normally don’t have much emotion when it comes to injuries. I have a general feeling that I hope each player can return healthy. But I’m upset about this Tua head injury because of what happened last weekend. It’s hard to not tie these together.

Pulling for Tua, scary as hell. I hope I’m being overly cynical but I think shit just got real for the dolphins. This is going to play out loudly.

Can’t believe that the Miami training staff let Tua play this week after EVERYONE seen him unstable and falling over himself 4 DAYS AGO..

That’s a serious injury . Tua shouldn’t have been out there with Sunday Thursday turn around. Sometimes players need protecting from themselves. Dolphins failed Tua

There are so many reasons Tua shouldn’t have played tonight, and so many people – adults who know better – that allowed it.
There will be lawyers.

Very thankful today for the Patriots' trainers/medical staff for the way they handled my concussion in 2011.

I was out on my feet, they took it seriously, and I spent the year on IR. They saved me from myself. I would've rushed back if they let me. They didn't.

really bad that the announcers and analysts aren't addressing in any way the nature of Tua's injury last week, the "investigation" of whether concussion protocols were followed, and what it might mean for a player to suffer two head injuries within 5 days

no mention at all

Amazon halftime show makes no mention of what happened to Tua on Sunday against Buffalo. No mention of Dolphins letting him play after he literally didn’t know where he was.

The @MiamiDolphins organizational leadership is trash! @NFLPA investigation into a potential concussion protocol violation on top of Flores allegations,Sean Payton pursuit & illegal recruitment of @TomBrady make it hard to ever give them the benefit of the doubt after @Tua injury

Mike McDaniel is complicit in this as well. He’s been around football long enough and went to an Ivy League school to know this is a concussion yet he still started Tua 4 days after this. pic.twitter.com/FgdLrsiLjt

On top of the fact that Tua should not have been cleared tonight, I cannot understand Thursday night games. These players should not have to come out barely 4 days after playing the most intense sport possible and then do it again with no rest and little prep. It’s not worth this