ABC and Vice led the news portion of the 43rd annual News and Documentary Emmy Awards, which were handed out tonight at the Palladium Times Square in Manhattan. Both scored eight statuettes, followed by CNN and The New York Times with five each and CBS and NBC with three apiece. See the full list of winners here.

The doc prizes will be presented Thursday by the National Academy of Television Arts & Sciences.

“Tonight’s Emmy winners exemplify broadcast journalism at its best, reporting that values fact over fiction, accountability over advocacy, and that champions the advance of truth in the interest of the communities we all serve,” NATAS Chairman said Terry O’Reilly said. “America has never needed its journalists more than today. We congratulate tonight’s honorees and thank them for the indispensable service they provide to our nation.” 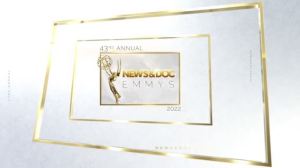 Judy Woodruff, the longtime anchor and managing editor of PBS NewsHour, was presented with a Lifetime Achievement Award. She announced plans in May to step down from her anchor post and pivot to reporting and special projects.

Elsewhere, the 2022 International Emmy for News was presented tonight to ITV News: Storming of the Capitol (ITV News, UK). ITV News was the only TV news team in the world embedded in the mob that stormed the U.S. Capitol on January 6, 2021, covering the insurrection firsthand.

The International Emmy for Current Affairs was presented to Germany’s Slahi und seine Folterer (In Search of Monsters).

“The International Emmy gives us an opportunity to reward quality in television from around the world even as in this case, the subject matter of the programs produced in the UK and Germany is events in the United States.” said Bruce Paisner, President & CEO of the International Academy of Television Arts & Sciences. Darius Slayton could be on his way back from...