MILWAUKEE — The Nets are opening this season Tuesday night in Milwaukee the same way they ended the last one — facing the Bucks without Kyrie Irving.

The last time was due to a sprained ankle; this time, it’s his refusal to adhere to New York’s COVID-19 vaccine mandate. It’s a stance that got Irving sent home by the Nets, and has also put them in an unwanted spotlight, creating a drama that they’ll have to learn to block out.

“Off the court, not getting too [distracted]. We know how crazy this year might be as far as the chatter around our team,” Kevin Durant said after Monday’s practice. “So we want to stay locked-in with each other, focus on whoever’s in the building and let that stuff take care of itself.”

Over the past week or two, everybody from the players to coaches to front office has clearly become resigned to not having Irving, and has moved on.

The team put out both a tweet and a trailer for its promotional video, then the video itself on Monday. Irving was scrubbed altogether from the first two, and only appeared in five seconds of the 11-minute 56-second video. He’s essentially become the Invisible Man, the persona non grata point guard.

Still, Durant isn’t naïve enough to think the story is going away. When video surfaced on TMZ of Irving playing flag football at a local school, it made the evening news. 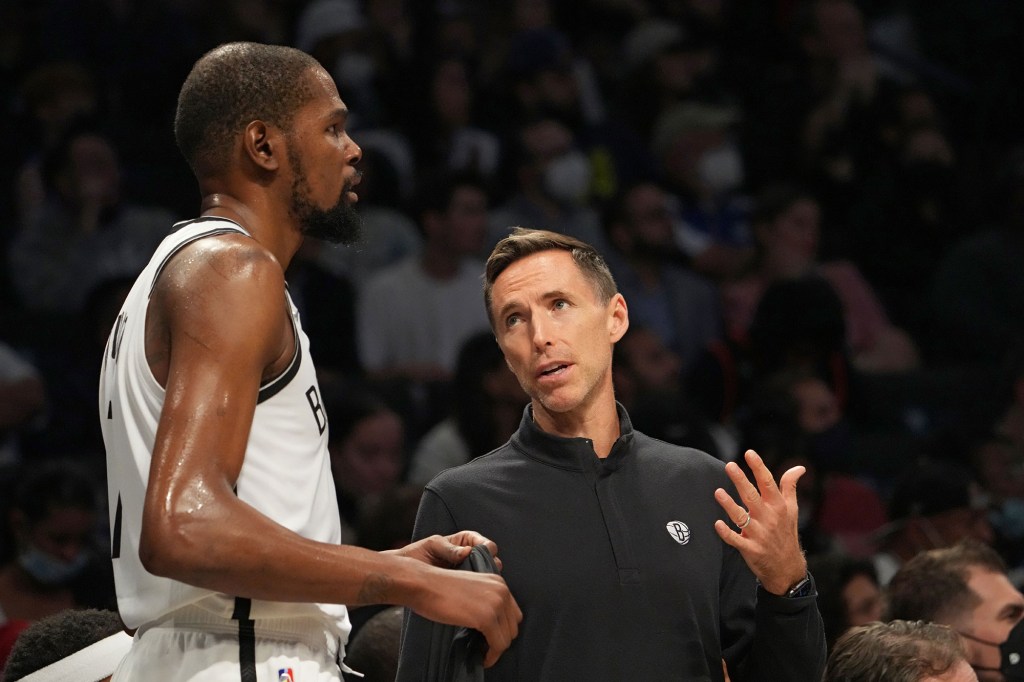 The Nets aren’t going to be able to outrun this story, so they’re going to have to just put their heads down and plow through it.

“Just focus in on your job,” Durant said. “You can’t control what people say and articles that’s being written, the narrative that’s being formed around our team. It’s part of our job; that’s why they pay us the way they pay us, because of that type of stuff too. So we’ve got to deal with that.

“I wish it wasn’t like that. I wish we could just focus on the purity of the game. But we understand what the moneymaker is here, so we’ve got to deal with that type of stuff.”

The Nets’ deadline for inking James Harden to an extension was 11:59 p.m. Monday. Though that wasn’t going to happen, they can re-sign him next summer.

Considering he can guarantee an extra $62 million by waiting, it’s just good business sense. And Nets owner Joe Tsai told The Post recently that Harden has every intention of staying in Brooklyn.

“Whether or not it’s the season now or later, the way I look at it is he’s already said I want to play and finish my career in Brooklyn: He’s actually said that. Our job is to make sure that he continues to feel that way,” Tsai said.

“As for the timing, we just respect his sense of timing and let things play out.”

The Nets’ plan to hold onto Devontae Cacok was spoiled by the Spurs.

After the 6-foot-8 big man spent camp with Brooklyn in hopes of getting at least a two-way deal, Long Island ended up acquiring his G-League rights. But San Antonio claimed Cacok off waivers Monday and gave him a two-way deal. Jets may get some defensive help ahead of...