In Simmons’ first game at Wells Fargo Center in 520 days, he looked healthy and aggressive while appearing to thrive on the relentless boos. Kyrie Irving played 30 minutes in his second game back since suspension. Kevin Durant poured in 20 points on 9 of 14 shooting.

But the Nets’ Big 3 still found a way to lose to a 76ers team that lacked its three best players in a 115-106 loss in the City of Brotherly Love, Excluding Simmons.

The Nets (8-10) halted a short two-game winning streak and head to Toronto on Wednesday for a back-to-back after a poor defensive effort and poor hustle, allowing the 76ers to shoot 50 percent (16 of 32) from beyond the arc. The Nets shot just 32.1 percent from deep, Joe Harris and Seth Curry combining to convert 3 of 13 from 3.

The 76ers cashed in on their chances and got many more of them: They outrebounded the Nets, 49-35. 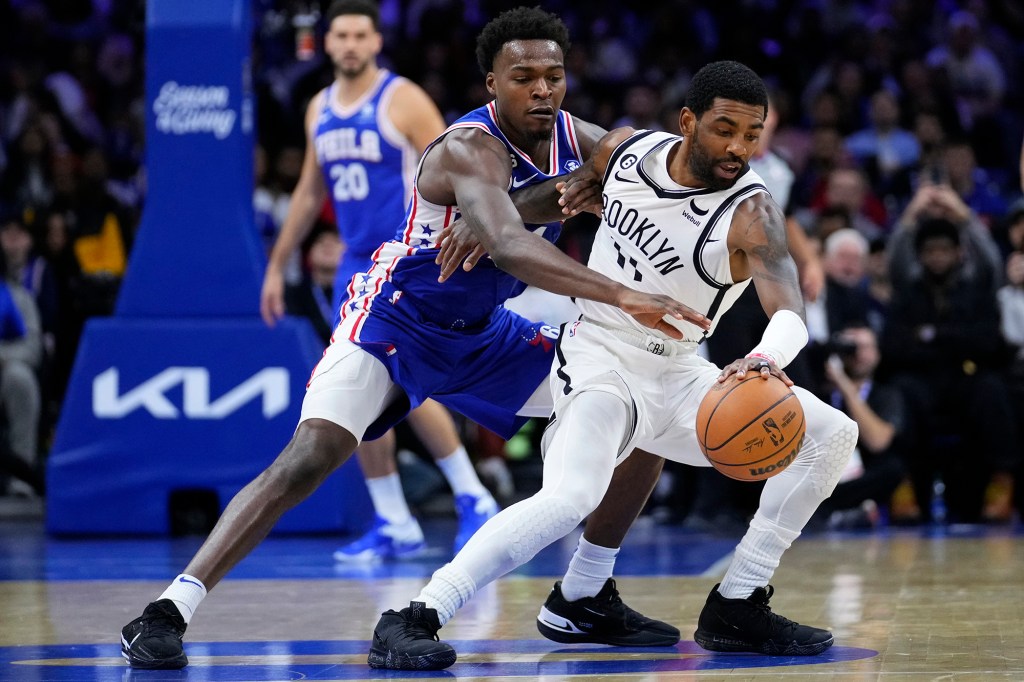 76ers’ Paul Reed and Kyrie Irving battle for the ball in the Nets loss on Tuesday night.AP

The Nets shot 55 percent from the field and made several runs, but they could not come up with the big stops or big loose balls. The Nets were down three entering the fourth quarter and watched the deficit balloon, beginning with a wide-open 3 from Furkan Korkmaz. The 76ers opened the final frame with an 11-5 run without Durant and Simmons on the floor and never looked back.

The 76ers were playing without Joel Embiid, James Harden and Tyrese Maxey, all out with injury. Instead, five 76ers scored double-digits on a night they took 19 more shots than the Nets, creating plenty of room for error they would not need.

Facing a shell of the 76ers, who got 14 first-half points from De’Anthony Melton, the Nets dug a 12-point hole. They were a step slow on defense and were out-hustled and out-sized to rebounds, the 76ers grabbing 11 more in the first two quarters. 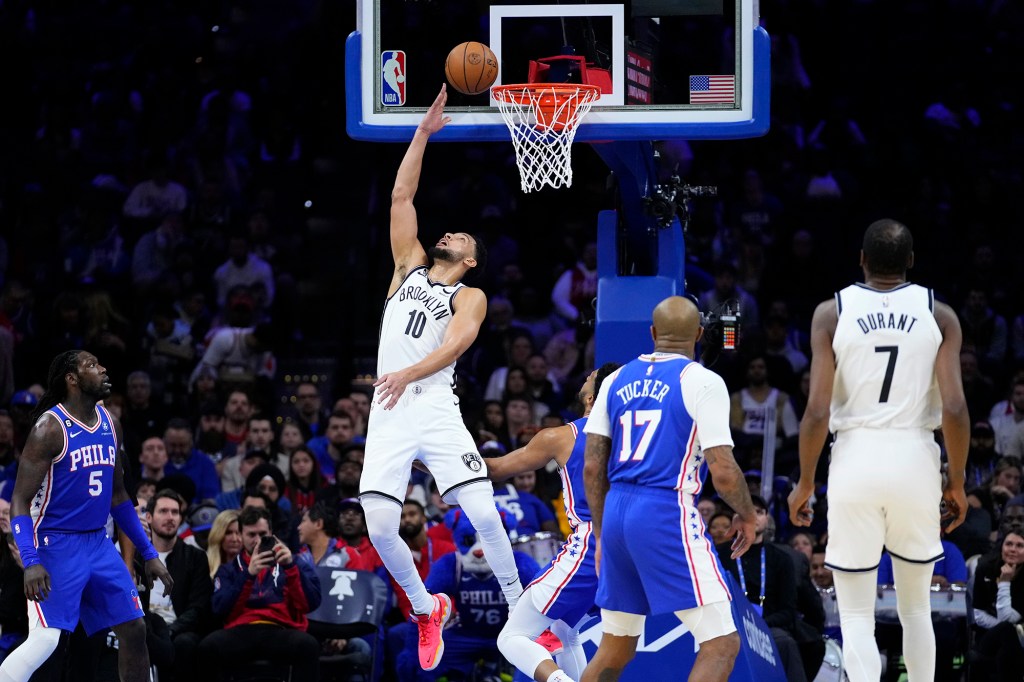 Ben Simmons shoots a layup during the Nets’ loss to the 76ers on Tuesday.AP

The Nets responded in the third quarter, when they made several runs to grab leads, but each was answered.

Simmons, playing his first game in Philadelphia since the 76ers’ Game 7 loss of the Eastern Conference semifinals to the Hawks on June 20, 2021 — in which he shied away from a dunk, which led to criticism from Embiid and coach Doc Rivers — looked healthy both physically and mentally. He finished with 11 points on 4 of 7 shooting to go with 11 assists and seven rebounds.

Simmons put a finger to his mouth — shushing the crowd — after rebounding his own miss and laying it up in the first half. He was booed every time he touched the ball, and seemingly any time the crowd lost energy, a “F–k Ben Simmons” chant broke out to get the fans going again.

There would not be any silencing the 76ers fans, but Simmons tried early. The fans were never louder than when Simmons, who shot 33 percent from the foul line in the series loss to the Hawks, was sent to the foul line.

With 48.3 seconds left in the first half, Simmons and Georges Niang got tangled up, both shoving the other. The officials looked at replays and assigned Niang a flagrant 1.

Simmons stepped to the line with a broad smile on in an ear-splitting arena before he missed the first free throw and swished the second.

A quarter earlier, Tobias Harris fouled Simmons, which brought instant joy to the fans. Simmons calmly stepped to the line and drained both foul shots. He gave a shrug and jogged back on defense. 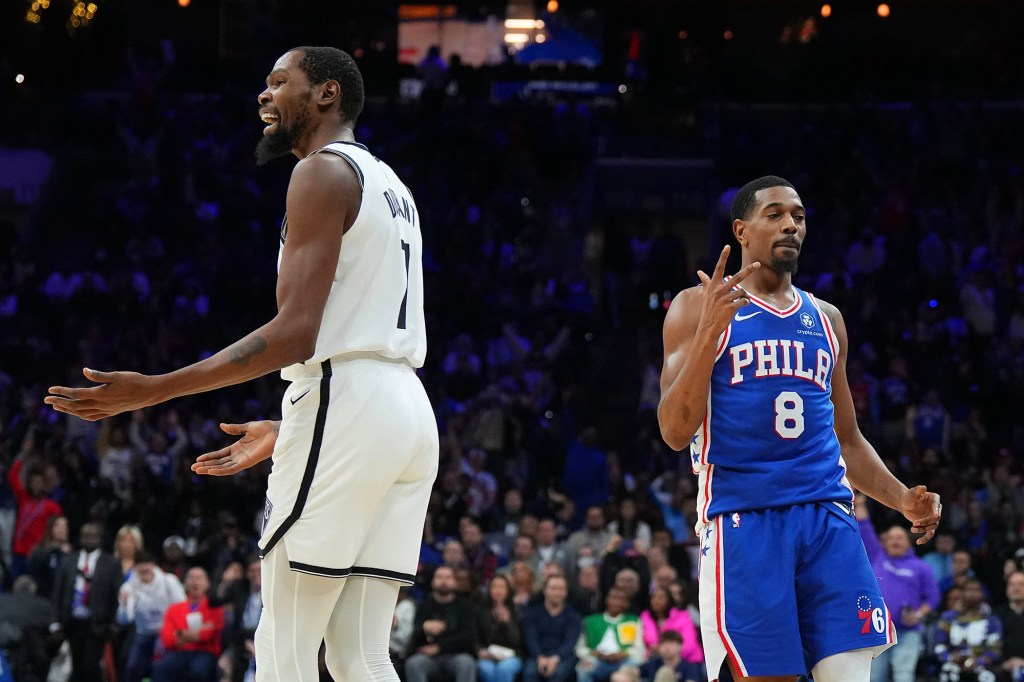 Simmons’ good times wouldn’t last forever — he missed a pair of foul shots in the third quarter, to the crowd’s delight — but the problem did not appear to be mental.

The Nets, meanwhile, have plenty of problems. Daniel Jones will need his legs to lead Giants...