INDIANAPOLIS – Before the 20th game of the Nets’ season, Jacque Vaughn said his team needed to focus on its consistency. Vaughn said he wanted to see “full games, 48 minutes – together on a more consistent basis.”

And then the Nets demonstrated exactly what has so frustrated their head coach – and showed plenty of frustration themselves in the process.

The Nets led by 12 in the first quarter, 65-57 at halftime and by six entering the fourth in a game that was wildly encouraging until it wasn’t. Vaughn’s team again could not find 48 minutes of consistency, collapsing in an ugly, tense fourth quarter in a 128-117 loss to the Pacers at Gainbridge Fieldhouse on Friday night.

The Pacers used a 17-4 burst in the first five and half minutes of the fourth quarter to seize a game that had not been theirs. Buddy Hield’s 3-pointer halfway through the period made it 108-98, unthinkable just a few minutes before. The Nets could not keep the Pacers away from the rim and could not stop hacking on the drives. The Pacers went 30 of 38 from the line. The Nets went 8 of 10. 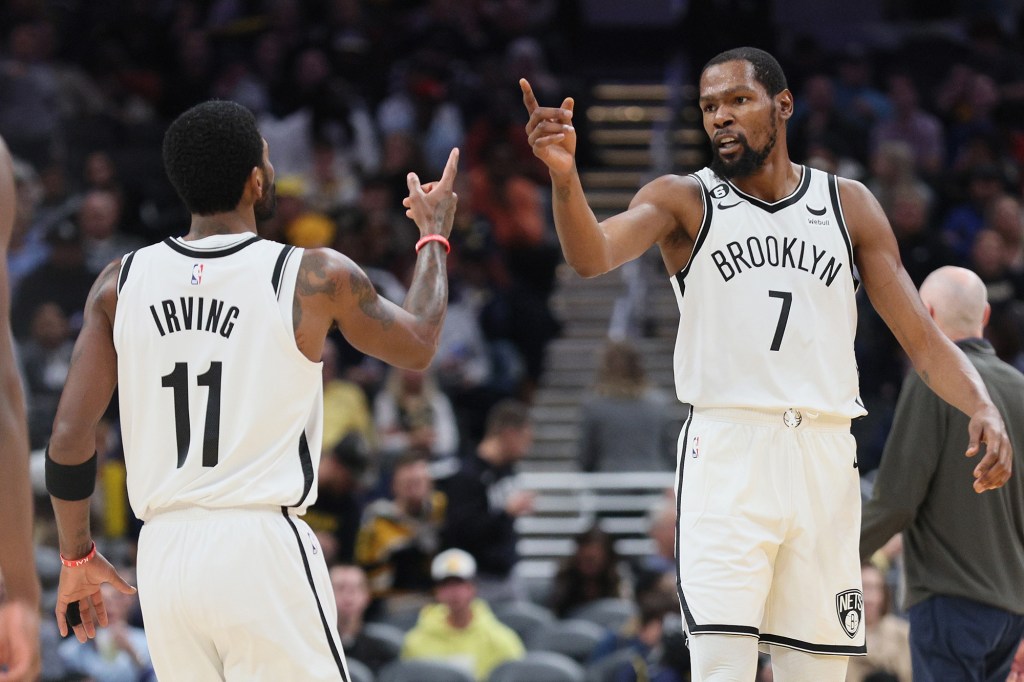 Kyrie Irving (11) and Kevin Durant (7) combined for 56 points on Friday but they couldn’t stop the Pacers from pulling away in the fourth quarter.Getty Images

The Nets’ frustration culminated with Kevin Durant – who scored 20 points in the fourth – hitting a jumper at 4:17 to make it 117-109 while getting hit in the face, without a whistle blown. The whistle blew a second later, as Durant yelled at an official and got teed up.

The Nets’ anger continued with 3:38 to play, when Nic Claxton shoved Tyrese Haliburton to the ground before running back on defense. Haliburton, who got up seemingly ready to fight, had to be held back. Claxton was given a Flagrant 1 for “unnecessary contact” in a game that had gotten out of hand.

The Nets were outscored 38-22 in the fourth quarter, the bulk of the Pacers’ early run coming against Brooklyn subs. Joe Harris, in particular, looked a step slow defensively and missed all three of his 3-point attempts in the game.

The Nets wasted a near perfect game from Ben Simmons, who went 8 for 8 from the field and 4 of 5 from the foul line in another strong game. Simmons finished with 20 points, three assists and six rebounds before fouling out.

Simmons showed a burst to get around whichever Pacer in front of him. He spun his way to a fastbreak layup. He challenged Indiana center Myles Turner at the rim, hung just a little bit longer and banked in a difficult 2-footer. He even got a feed from Durant and finished a step in from the elbow, which could qualify as a jump shot. 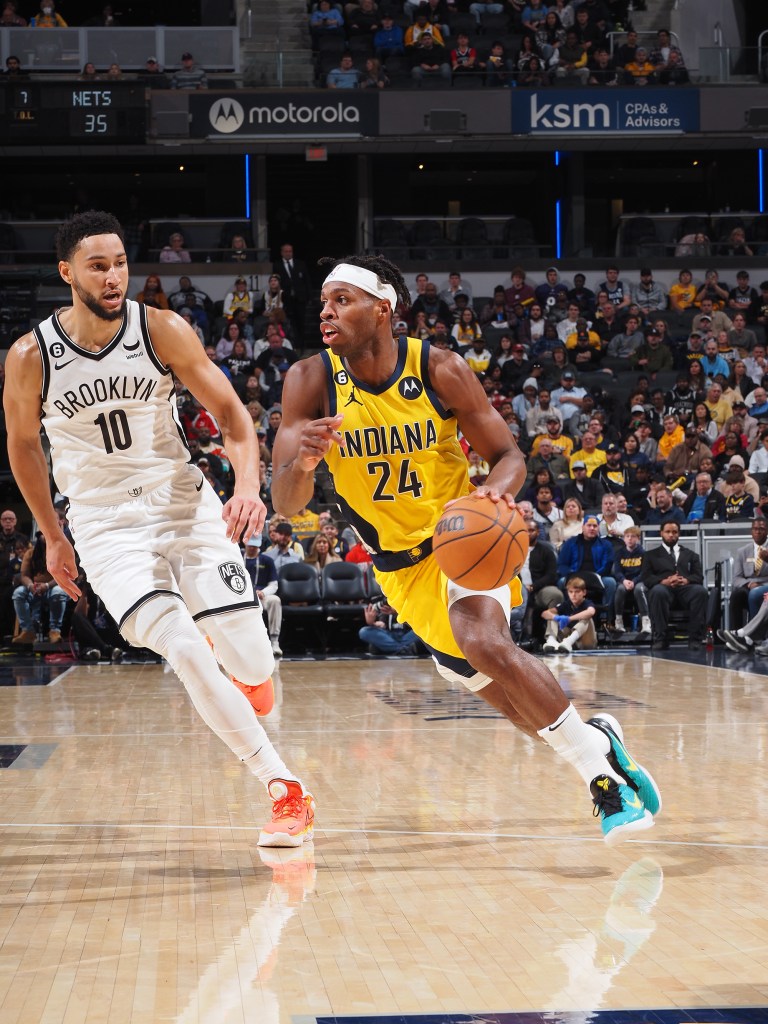 Buddy Hield (24) led the Pacers with 26 points.NBAE via Getty Images 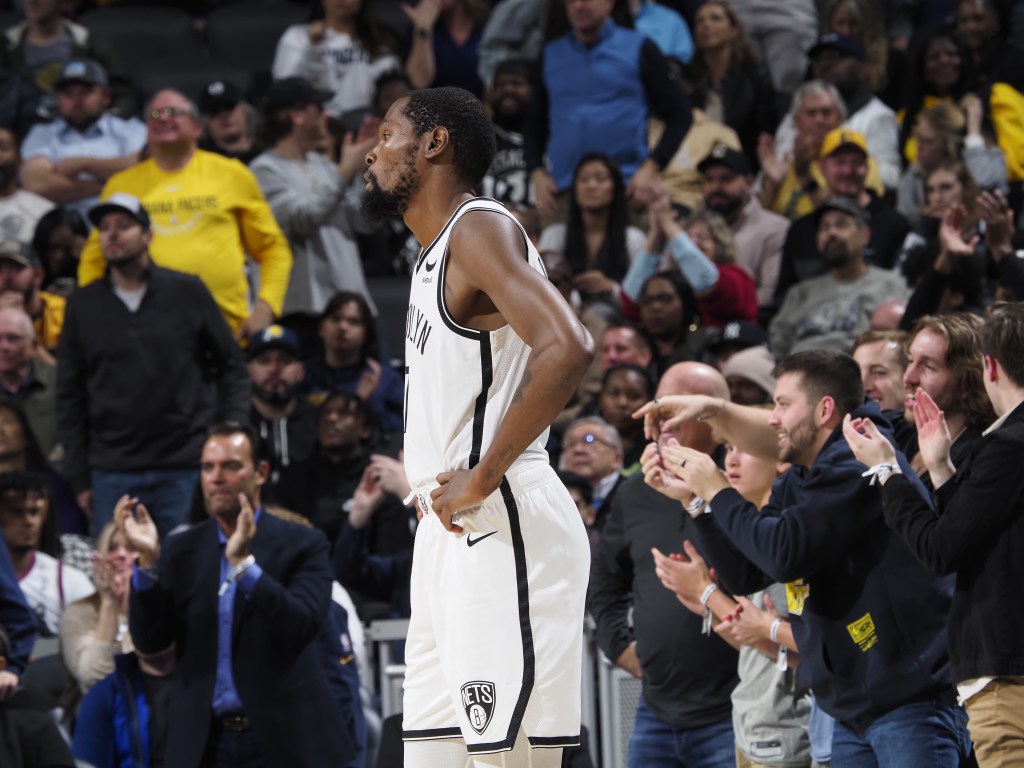 Kevin Durant reacts during the Nets’ loss to the Pacers. NBAE via Getty Images

Defensively, Simmons guarded everyone from Turner to Tyrese Haliburton in demonstrating a truly unique game that, at full point, can mesh well with the offensively focused Durant and Irving.

In seizing a 65-57 halftime lead, the Nets shot 61.4 percent from the field and nailed 9 of their first 21 3-pointers. The ball never stopped moving for Brooklyn, which tallied 19 first-half assists. Durant (11), Irving (14) and Simmons (12) all were in double digits at the break, when the Nets used sizzling offense to make up for spotty defense.

The Pacers cut into the Nets’ lead in the second quarter, in which Harris was targeted. The Pacers worked the ball to whomever Harris was covering for the first five minutes of the quarter – typically Buddy Hield – and Harris, coming off foot surgery, could not hang. Hield had six early points in the quarter. The Nets’ shooting lineup that included Harris and Patty Mills was a minus-3 dud before being subbed out.