Netflix In Europe: 30% Of Content On Streamer Hails From Continent In “Almost All” Major Markets

New research shows almost a third of Netflix’s European content now hails from the continent, as the effects of quota regulations and its push into local original content kick in. An Ampere Analysis study suggests the streamer is at or above the 30% European content in “almost all” European markets, though the figure is slightly below this mark in the UK, Ireland and France.

This marks a rapid shift in recent months, with just 16 of 27 markets analysed falling below that threshold as recently as December 2021, and while the UK, Ireland and France currently hover around the 27% mark, Ampere said Netflix is “just a ’rounding error’ away” from meeting requirements across its entire European footprint.

In the UK, Netflix would hit the 30% mark with the addition of just 408 titles, or by removing 953 non-European titles. Even fewer is needed in France, and Belgium and Switzerland, which are also just beneath the line.

‘’Quietly, while no one was watching, Netflix has boosted the proportion of its catalogue titles that are European to the point where meeting new quota regulations should have no negative impact on its regional business,” said Guy Bisson, Research Director at Ampere.

Amazon exceeds the 30% mark in Germany, Switzerland and Italy, and is around the 27% market in the UK. Other markets range from 16% to 28%. Most of HBO Max’s European markets already exceed 25%, but Disney+ trails behind at nearer 10% across its footprint.

It can be expected that all the international SVoD services will continue to make noise across Europe, as each is committing significant spend to original productions from the continent. 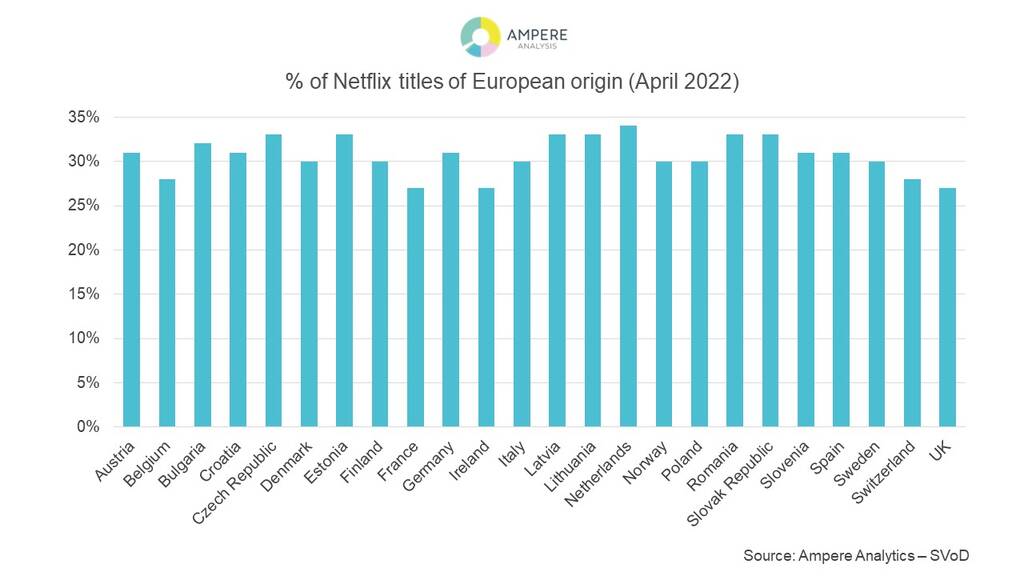 Ampere suggested the increase in European content could either be seen as the benefits of the regulatory pressure on U.S.-based streamers to acquire and produce more directly from the European film and TV markets, or could be seen as how the global players are more directly in competition for content that was previously the stronghold of single-market broadcasters.

“The milestone is a reflection of heavy investment in content outside the US which is rapidly being mirrored by other global streaming players. Perhaps more surprising than Netflix’s 30% milestone is the fact that some of the newer major studio players are already rapidly approaching a similar proportion of European content in their local catalogues.’’ The PointsBet Promo Code is NYPBONUS for June 2022