The NBA acknowledged that three officiating calls that went against the Knicks were incorrect in the closing minutes of Tuesday’s 112-110 loss to the Timberwolves at the Garden.

Most notably, in its official “Last 2-minute (L2M) report,” the NBA said that Karl-Anthony Towns committed an offensive foul on Julius Randle seconds before the Knicks’ All-Star was whistled for a foul on the Minnesota forward’s driving three-point play that put the Timberwolves ahead by one with 29.3 seconds remaining.

“Towns (MIN) reaches out and grabs Randle’s (NYK) arm and affects his ability to defend,” the ruling states.

The comment section also noted that “Randle (NYK) makes contact with Towns’ (MIN) arm that affects his driving shot attempt,” but that call apparently should have been superseded by the previous infraction that was not called against Towns. 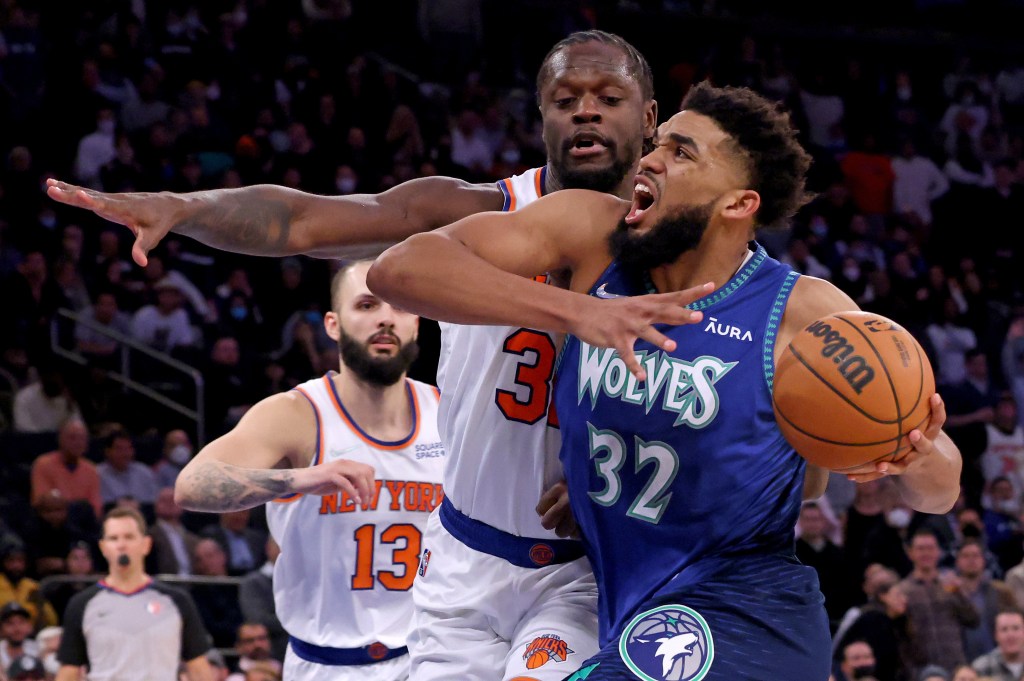 Julius Randle is called for a foul and-1 on a drive by Karl-Anthony Towns that should have been an offensive foul according to the NBA’s two-minute report.Charles Wenzelberg/New York Post

“After the deflection, Russell (MIN) extends his forearm into Barrett (NYK) and dislodges him from his position during the loose ball,” the comment reads.

Earlier, it also was ruled that Towns should have been called for a reach-in foul for “making contact to the arm” on Evan Fournier’s turnover with 1:46 remaining. The Knicks were charged with three turnovers (two by Barrett) in the final two minutes, and Randle also missed a free throw that could have tied the game five seconds after Towns’ three-point play.

After the game, Tom Thibodeau lamented the calls that didn’t go in the Knicks’ favor, while also noting that games often are “officiated differently” in the fourth quarter.

“Sometimes we got to adjust to the way the game is being called,” Thibodeau said. “So we had some tough calls go against us. We just can’t put ourselves in a position like that where the refs are a factor.” 1,200 Oakland Students Will Stay Home Unless...