After Kim Kardashian allegedly damaged Marilyn Monroe’s 60-year-old dress by squeezing into it for the Met Gala, museums around the world have come together to stop it from happening again.

The International Council of Museums (ICOM), whose members include the Smithsonian, The Getty Foundation and UNESCO, has announced the formation of a new committee in response to the reported “fashion loss,” as Ninke Bloemberg, committee treasurer and fashion curator at the Centraal Museum in Utrecht, told The Post.

Kardashian borrowed the Bob Mackie-designed number that Monroe wore in 1962 to sing “Happy Birthday” to President John F. Kennedy, for the May event. On June 13, the Marilyn Monroe Collection, which claims to be “the world’s largest private collection of Monroe’s personal property & archives,” posted to Instagram what it said are before and after photos of the dress, showing “missing crystals, and some left hanging by a thread.”

Kardashian this week denied the dress was harmed. 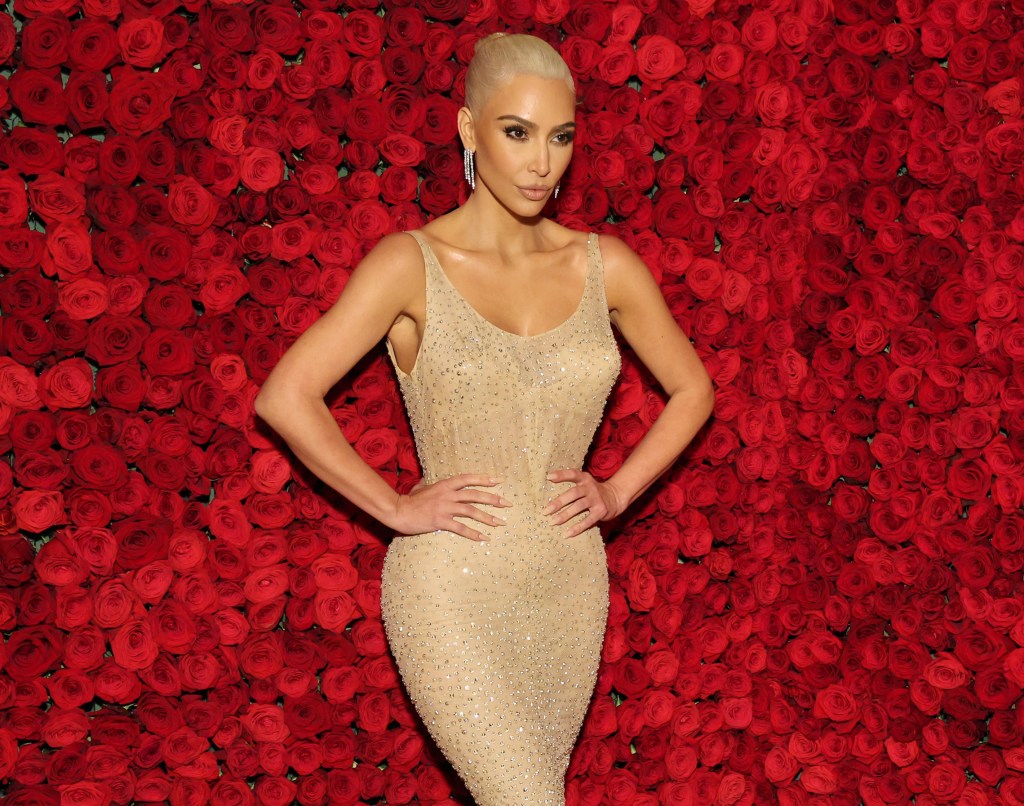 The dress Kim Kardashian wore to the 2022 Met Gala was originally designed for Marilyn Monroe, who was sewn into the garment before singing “Happy Birthday” to President John F. Kennedy in 1962. Getty Images for The Met Museum/

Still, the sole purpose of the new committee is to preserve heritage fashion like Monroe’s iconic gown, which Bloemberg described as “irreplaceable.”

“Whatever the motivation was for wearing it, did it justify the known damage that would happen to the garment?” said Kevin Jones, curator of the FIDM Museum in Los Angeles, which is not an ICOM member. “[Kardashian wearing that dress to the Met Gala] was not an uninformed spur of the moment decision.”

He added: “Simply put, wearing a dress like this — especially while walking up a grand staircase, which it was not designed to handle — is like driving an extremely rare, one-of-a-kind automobile in a drag race.” 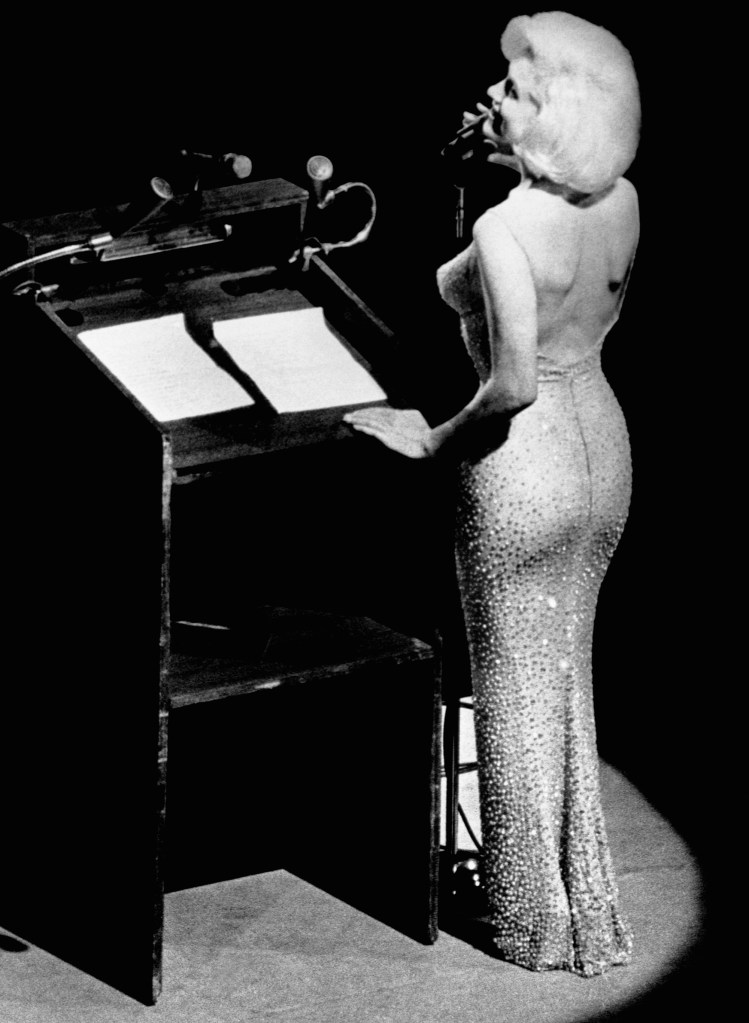 The fabric of the dress was so fragile, Monroe herself had to be sewn into it.Bettmann Archive

Kardashian was loaned the dress by Ripley’s Believe It or Not museum in Orlando, and the company had purchased it at auction in 2016 for a reported $4.8 million. (Ripley’s also denied the gown being damaged by Kardashian, citing a 2017 report on the dress’ condition which stated “a number of the seams are pulled and worn. This is not surprising given how delicate the material is. There is puckering at the back by the hooks and eyes.”)

In a May interview with Vogue, Kardashian said, “I’m extremely respectful to the dress and what it means to American history.”

The committee will be devoted to advocacy and disseminating information and guidance on preservation and care of historic garments. 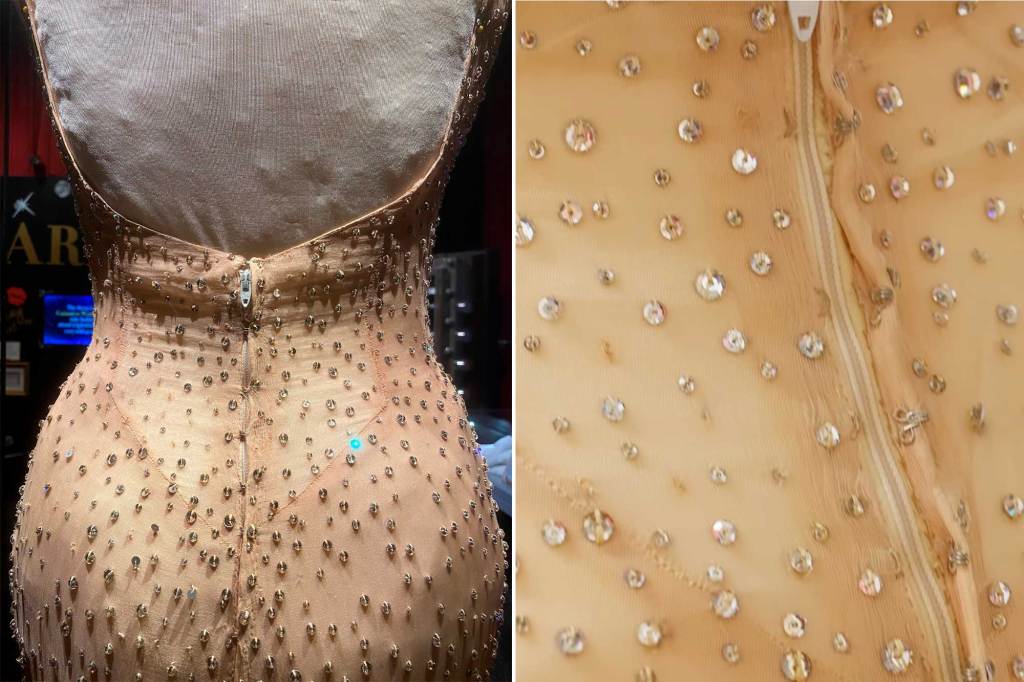 Right: Before Kardashian borrowed Monroe’s dress for the Met Gala, it’s alleged that only a few crystals were missing and the fabric was intact. Left: After, more crystals were allegedly missing, with others hanging by a thread.ChadMichael Morrisette via AP; Instagram

That said, the ICOM has no authority to recall garments to museums or restrict A-listers from wearing them. “We aren’t regulators,” said Corinne Thépaut-Cabasset, committee chair and research associate at the Palace of Versailles.

For example, with Ripley’s — which is not a member of ICOM — the committee would in the future be able to offer advice on how to protect fashion. But the first note would be: Don’t put it on a human being.

“Historic garments should not be worn by anybody, public or private figures,” ICOM said in a statement. “Prevention is better than cure. Wrong treatment will destroy an object forever.” 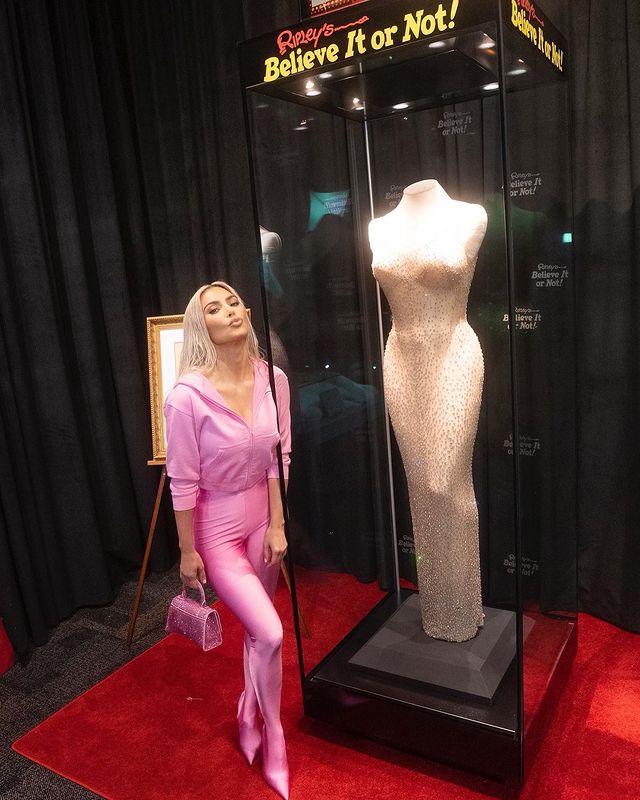 Before Kardashian squeezed into the dress for the Met Gala, she paid it a visit to its climate-controlled display case at Ripley’s Believe It or Not!@ripleysbelieveitornot/ Instagram

“The paradox of fashion in a museum is that to best preserve it, we should avoid unnecessary handling and display, which often includes it being worn,” Sarah Scaturro, the Costume Institute’s former head conservator and current chief conservator at the Cleveland Museum of Art, told The Post.

If someone is going to wear it, according to the committee’s guidelines, “[A heritage dress] should be not washed or cleaned by anyone except a trained conservator, it must be handled with cotton gloves and without any perfume, skincare or make up on, and jewelry should not be worn to avoid catching on any loose threads.”

Of course, Kardashian didn’t forgo her famous glam for the Met Gala, where she showed up in a full-face makeup and no cotton gloves. (Although she reportedly did not wear body makeup, as she often does.) Her representative declined to comment. 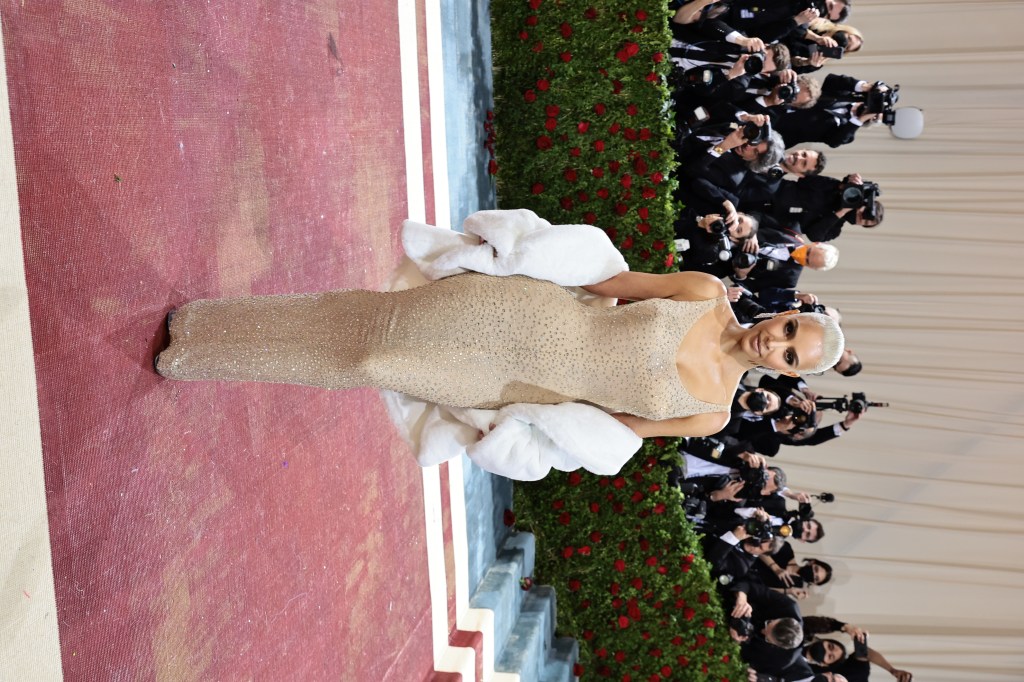 Kardashian is said to have later changed into a replica of the gown for the party.Getty Images

“Action of protection is the responsibility of the curator of the collection. ICOM does not interfere because [we are] a public platform that helps museum professionals [by sharing] expertise and knowledge,” she added.

Protection has always been ICOM’s top priority — especially when it comes to historic pieces of fashion that were tricky to handle even when they debuted. Monroe’s dress, for instance, was crafted from soufflé silk so delicate that it had to be sewn onto her body. Even Monroe wore it for only a few minutes then changed into something else.

Kardashian, likewise, only wore the gown for a limited time on the red carpet; once inside, she reportedly changed into a replica. 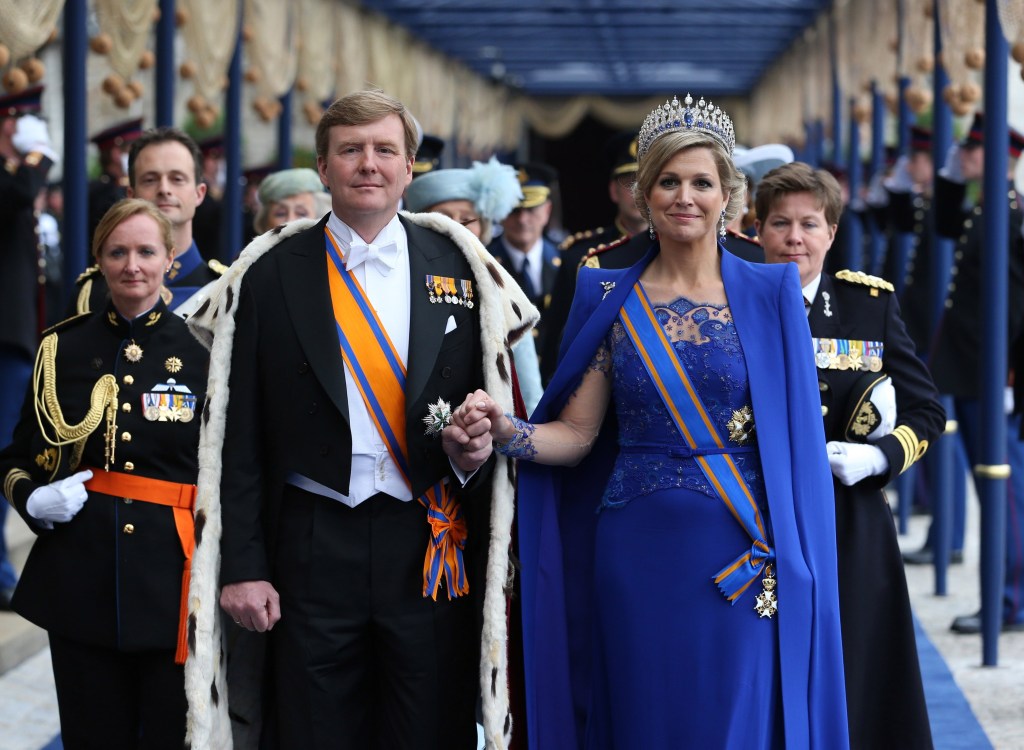 The royal blue gown that Jan Taminiau designed for Queen Máxima of the Netherlands’ 2013 coronation is one that should be protected, according to experts.Getty Images

Still, said Jones, “The damage cannot be undone. Every future generation is going to see the damage to that dress. [Kim] wearing it to the Met Gala didn’t add anything to the importance of the garment that wasn’t made for her. The story no longer belongs to just Marilyn.”

Although Jones admitted that the whole fiasco “makes [me] very sad,” he and Bloemberg agree that the only decent thing to come out of the incident is that the public is now aware of fashion’s significance in both an artistic and historical context.

“Because of fashion’s close ties to commodification and the feminine, it’s often been perceived as frivolous,” said Scaturro, who is a member of both ICOM and the new committee, and consulting on the revised guidelines. “And yet all humans everywhere wear dress of some sort — as the fashion curator Claire Wilcox has stated, ‘Clothes are shorthand for being human.’ Why shouldn’t we protect [fashion]?” 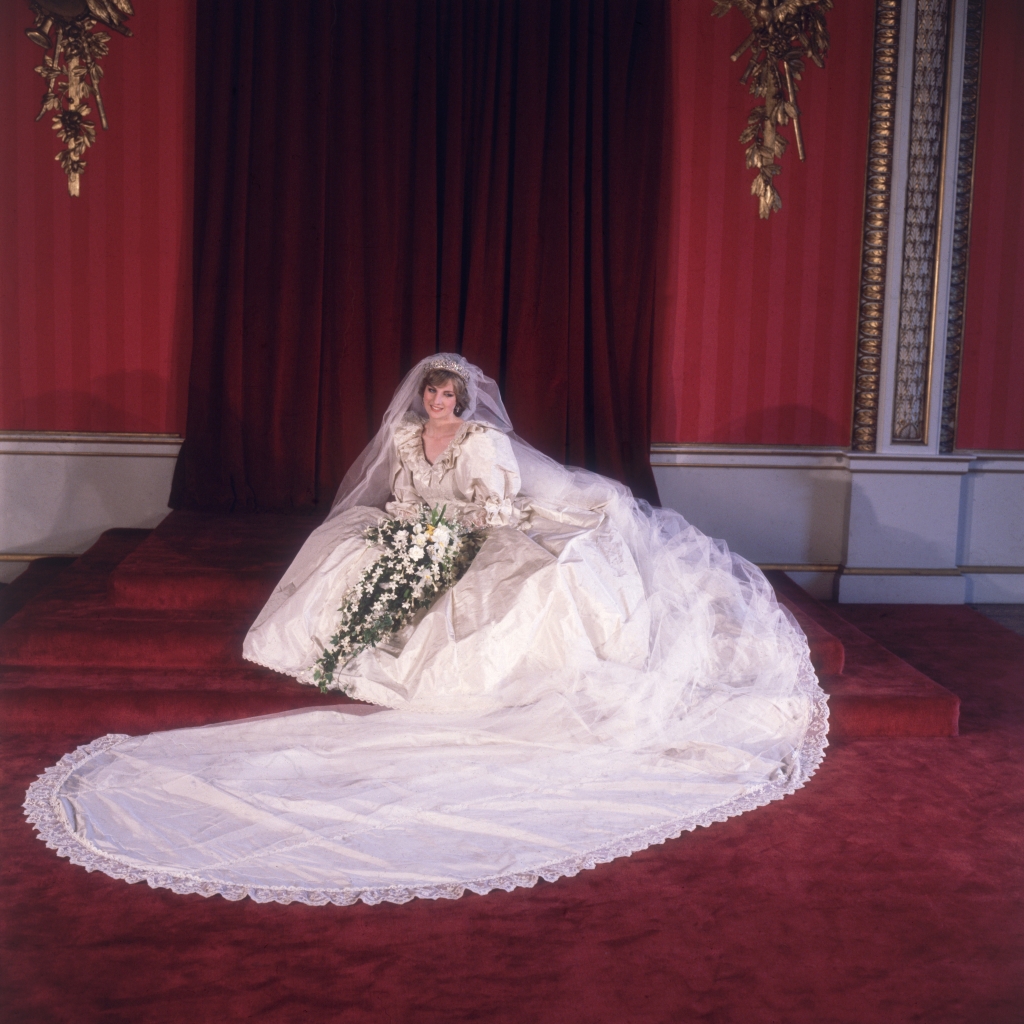 One expert hopes that the Elizabeth and David Emanuel-designed gown worn by Princess Diana on her wedding day will never be worn by anyone else.Getty Images

If ICOM were to put together a watchdog list of outfits to protect, Bloemberg said it would include the Jan Taminiau-designed dress that Queen Máxima of the Netherlands wore to her 2013 coronation.

For Jones, the seminal piece that he hopes will never be worn again is Princess Diana’s wedding dress, which was featured in an exhibit at Kensington Palace until January 2022.

He said that, as a curator and protector of fashion at the Fashion Institute of Design & Merchandising Museum in Los Angeles, he is dedicated to keeping historic and rare fashion in museums and off of red carpets.

Thépaut-Cabasset said, “Why should fashion not be taken as seriously as other art form? Every piece of historic clothing is a valuable one.” Grace Kelly’s granddaughter to tell all as a...