The Mets spent the weekend going hard to win two of three from the Yankees in an emotionally charged series.

On Monday, the hangover was real.

The offense that scored 24 runs in three Subway Series games went silent and the Cardinals ran away with the game late as the Mets fell 7-0 in front of 19,057 at Citi Field.

The matchup offered the Mets (72-73) a chance to make up some ground on one of the teams they trailed in the National League wild-card race — where they were suddenly closer to a potential playoff spot than within their own division — with five teams separated by three games for one spot entering Monday.

Instead, the Cardinals (74-69) inched closer to the final wild card that the Padres were clinging onto with a late game while the Mets failed to keep their momentum going with 17 games now left to play.

“The stage will be a little different, but what’s at stake is even more now,” manager Luis Rojas said before the game when asked about avoiding a letdown. “We’re approaching less games and we’re facing a rival that is fighting for the spot, as well. The guys know what’s at stake, so I don’t think they’re going to take anything off of it.

Trailing 3-0 in the eighth inning, with thunderstorms rolling in, the Mets threatened to make a late comeback. A Francisco Lindor walk and Michael Conforto single put runners on the corners with no outs. But Cardinals reliever Alex Reyes locked in to strike out Pete Alonso, Javier Baez and Jeff McNeil to escape the jam. 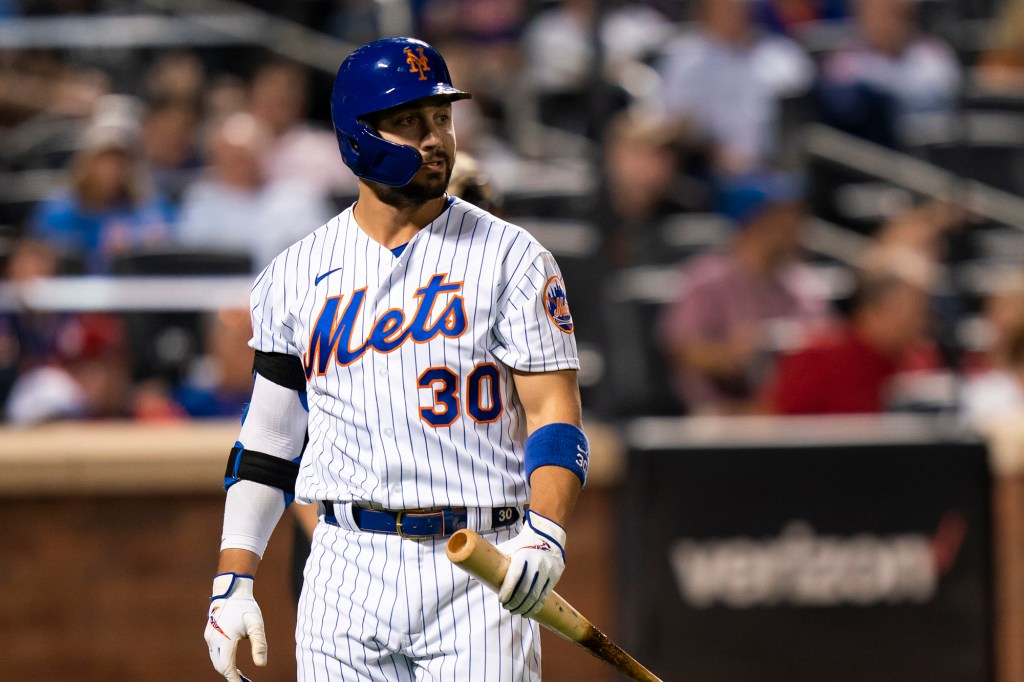 The Mets went 0-for-7 with runners in scoring position while the Cardinals capitalized on another rally in the ninth inning to blow the game open. Nolan Arenado, Yadier Molina, Edmundo Sosa and Harrison Bader each chipped in RBI singles — the first three off Yennsy Diaz and the last off Trevor Williams — to put the game out of reach.

In a battle of 40-plus-year-old starting pitchers, Cardinals right-hander Adam Wainwright got the upper hand by limiting the Mets to four hits over six shutout innings. Rich Hill countered with a serviceable start for the Mets, giving up three runs over five innings, but it wasn’t enough.

The Mets loaded the bases with two outs in the bottom of the first inning but could not cash in as Wainwright struck out McNeil on three pitches.

The Cardinals then took a lead in the top of the second, as Molina and Dylan Carlson led off with back-to-back doubles to go up 1-0.

A leadoff double came back to cost Hill again in the third inning. This time it was Tommy Edman who ripped a two-bagger before coming around to score on Paul Goldschmidt’s single up the middle to make it 2-0.

Goldschmidt later led off the fifth inning with a solo home run, putting the Cardinals ahead 3-0.

After wasting a prime scoring chance in the first inning, the Mets didn’t put another runner in scoring position until the fifth inning when pinch-hitter Dominic Smith doubled with one out. The Mets later had runners on the corners with two outs, but Conforto smoked a line drive right into the glove of Goldschmidt at first base to end the threat.

The Mets hit into more bad luck in the seventh inning. After J.D. Davis pinch hit with a single, Jonathan Villar drilled a 112.5 mph line drive. But second baseman Edman slid to his right to snag it and then threw to first to double off Davis to end the inning. Peyton Manning salvaged a rough start to his...