The Mets are whole, playing their best baseball of the season and establishing their promise against a team with postseason bona fides.

They entered a five-game set against the Braves in first place in the NL East, and the Mets will finish the series in the same spot after riding four home runs to a 6-4 victory over the reigning World Series champions in front of 38,693 sweating fans on a muggy Thursday night at Citi Field.

Manager Buck Showalter’s club, which moved 4 ¹/₂ games up on Atlanta, has won nine of 10 and has begun to reinflate a division lead that had shrunk.

The Mets (67-38) led the NL East by 10 ¹/₂ games on June 1 before that lead shrank to a half-game by July 23. But since Atlanta got that close, excellent play, dominant work from Edwin Diaz and players returning to health have steadied the Mets.

Catcher James McCann returned to the lineup Thursday, a day after Trevor May returned to the bullpen. Atlanta will face a healthy Max Scherzer (Saturday) and Jacob deGrom (Sunday). And the Braves got a bitter first taste of the Mets’ recent additions, as left fielder Tyler Naquin homered twice in his first home game in Queens, while Daniel Vogelbach slugged his second home run in as many days. 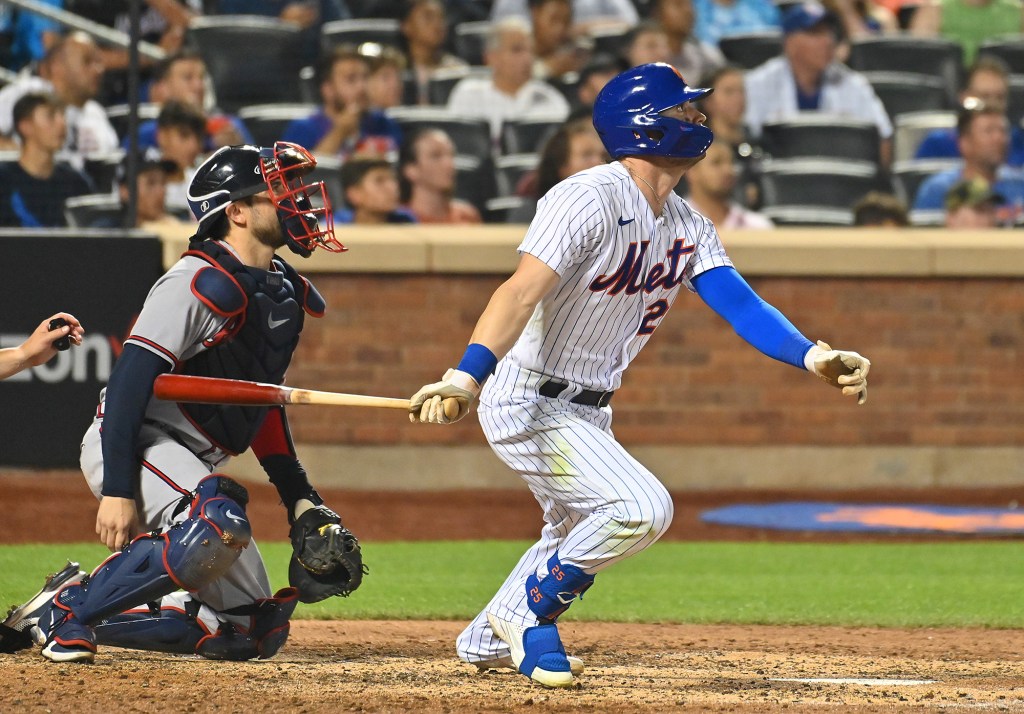 Tyler Naquin hits his second home run of the night in the sixth inning. Robert Sabo for the NY POST 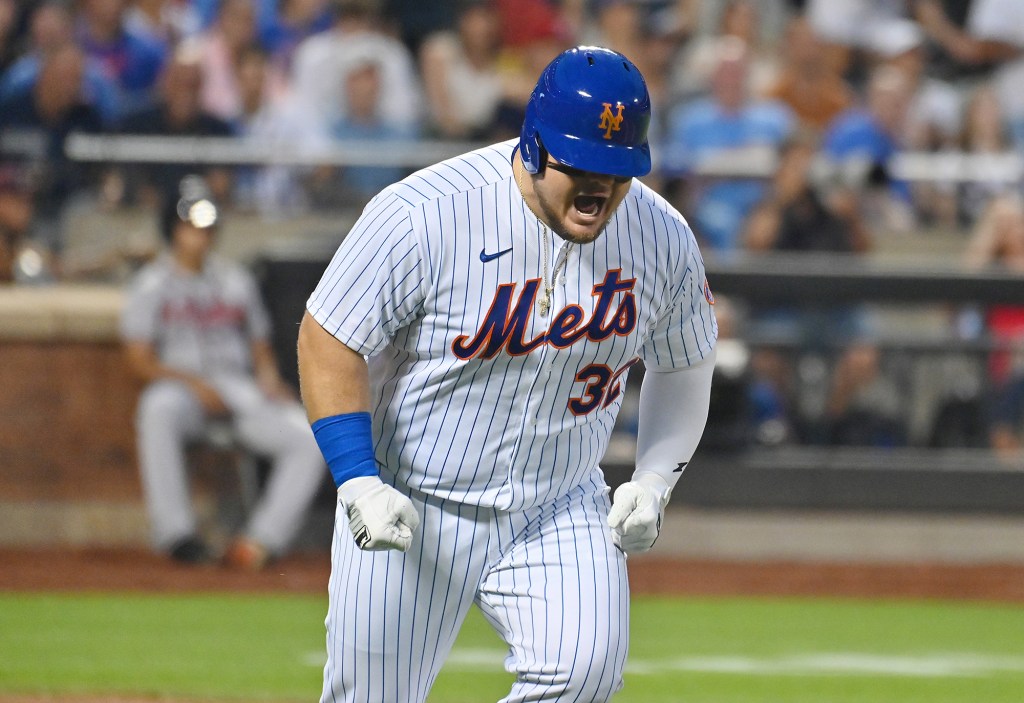 Daniel Vogelbach reacts after crushing a solo homer in the third inning. Robert Sabo for the NY POST

As if demonstrating they can score in different ways when the occasion arises, the Mets used both small ball and the long ball to grab a lead they did not relinquish.

In the first inning, Starling Marte reached on an infield single, moved to second on a walk to Francisco Lindor and scored on Pete Alonso’s RBI single.

Then the Mets turned to the long ball. 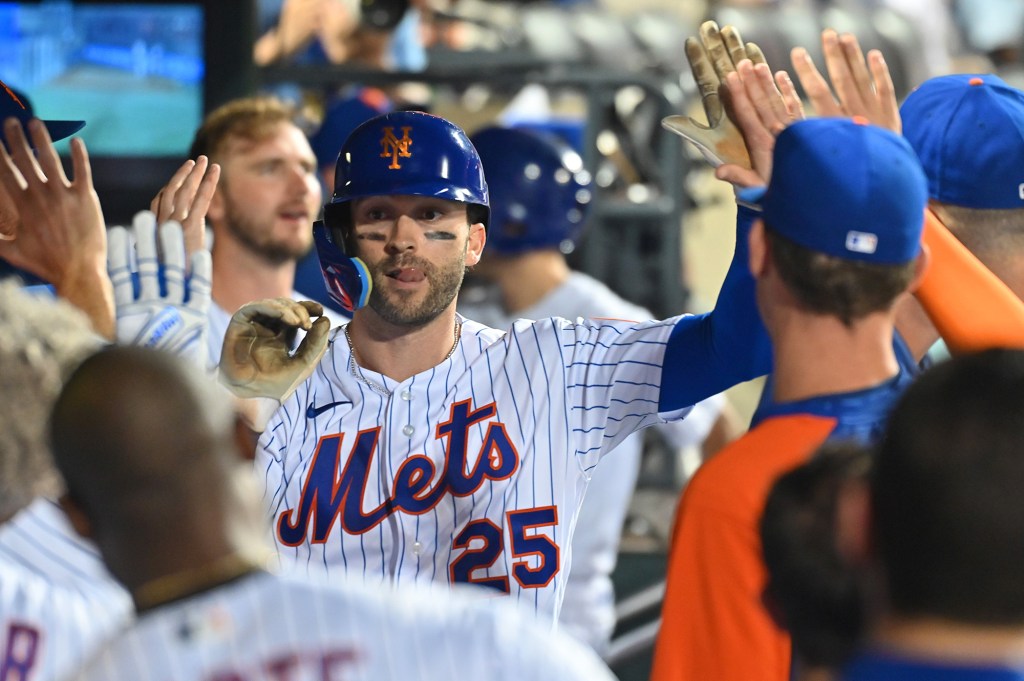 Tyler Naquin is greeted in the Mets dugout after his sixth-inning home run. Robert Sabo for the NY POST 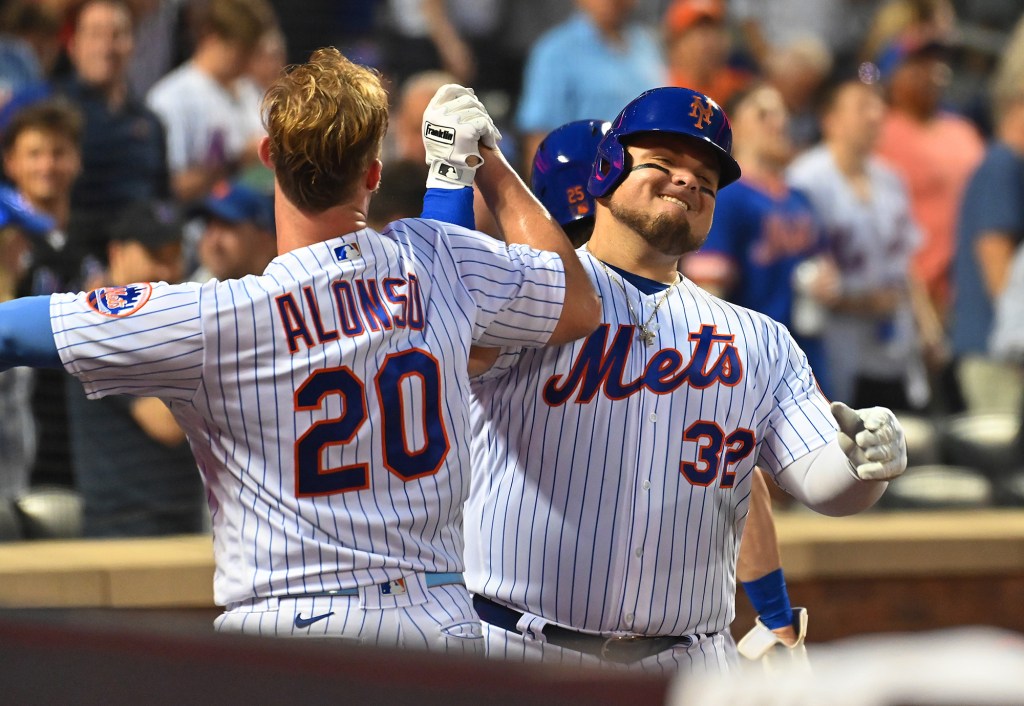 Naquin’s first at-bat as a Met resulted in a second-inning homer, his eighth of the season. Alonso, who went 2-for-3 with three more RBIs to reach 91 on the year, got a mistake curveball in the third inning and destroyed it for a two-run homer, his 29th of the year. Four pitches later, Vogelbach, in the lineup against Braves righty starter Kyle Wright, swatted a homer to right.

That was be all the scoring the Mets needed, though there were a couple of scares from Carlos Carrasco and the Mets’ bullpen until Diaz shut the door.

Carrasco, who pushed his scoreless-innings streak to 22 ²/₃ innings, was rolling until the fifth. The Mets righty, who posted a 0.90 ERA in July, allowed just one hit in his first four frames, but Atlanta’s Michael Harris II knocked an RBI single before Carraso threw a juicy slider to Ronald Acuña Jr., whose two-run homer brought the Braves to within 5-3. 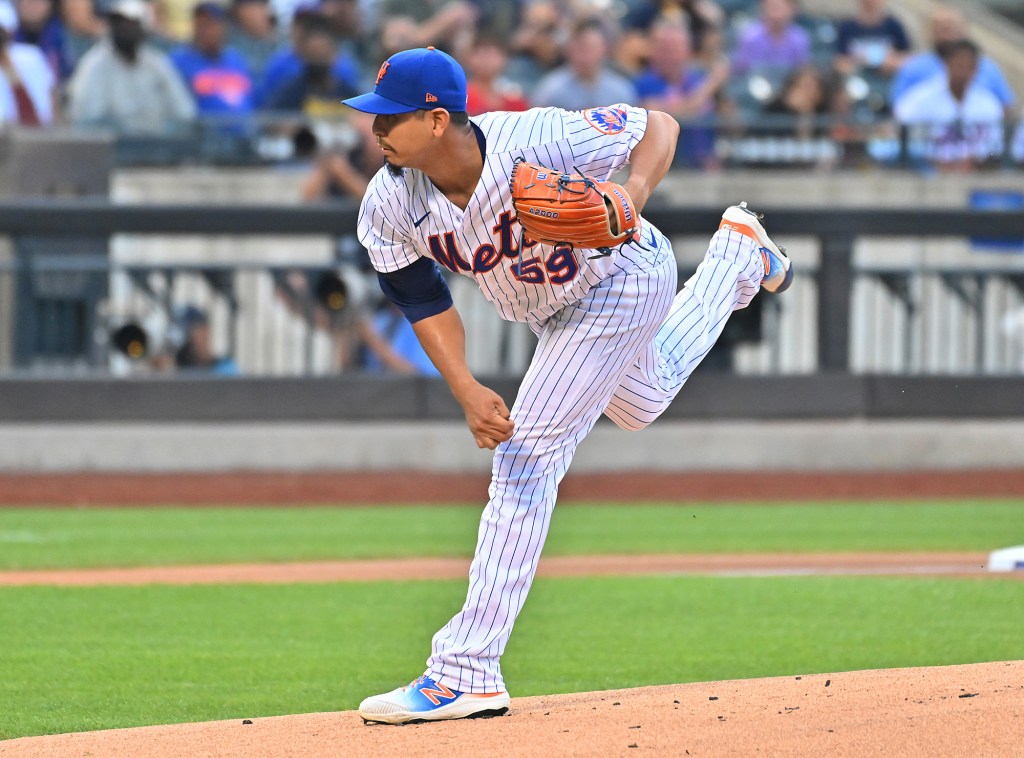 Carlos Carrasco pitches on Thursday during the Mets’ win over the Braves. Robert Sabo for the NY POST 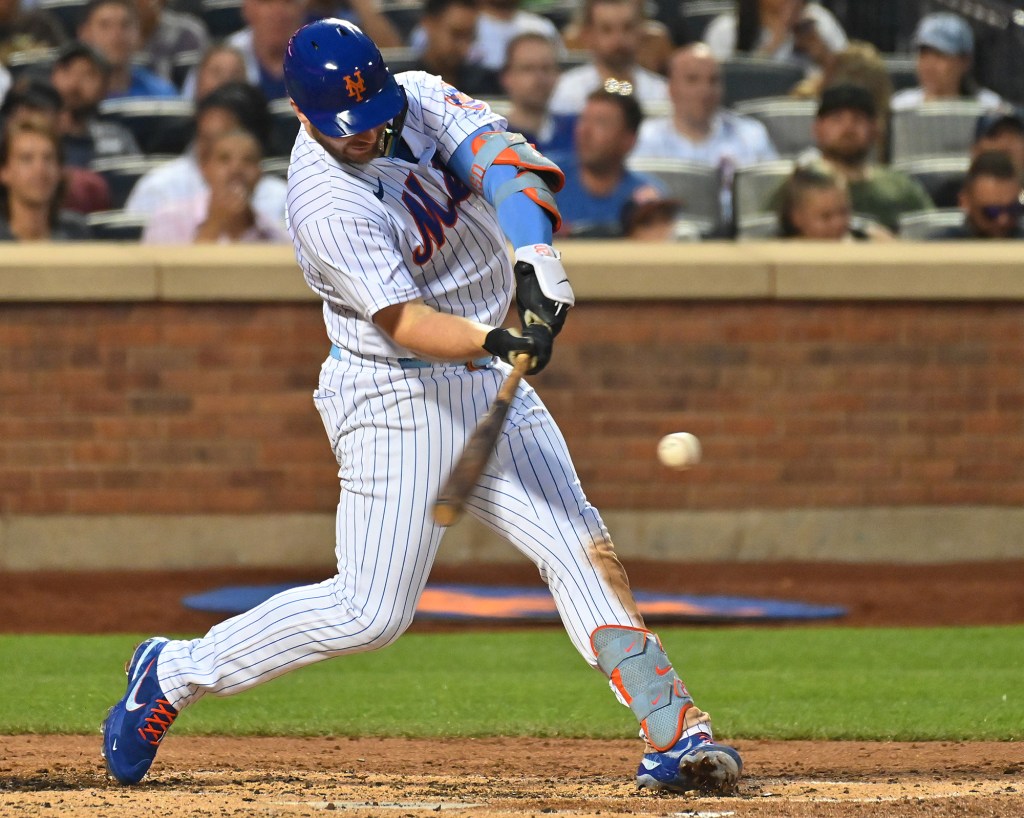 They got no closer. The Mets scored one more run in the sixth on Naquin’s second homer of the game, and the Braves answered with one run against Adam Ottavino in the seventh. But with a runner on and Acuña at the plate, Ottavino’s best slider of the night struck out the superstar swinging.

Showalter called on Diaz, who had not pitched since Friday, for his first six-out save of the season. And as Diaz has done all season, he obliged.

Diaz, who set the Braves down in order in the eighth, surrendered a leadoff single to Eddie Rosario in the ninth. He then got Travis d’Arnaud to fly out, struck out Marcell Ozuna and got Orlando Arcia to tap out back to the mound with the crowd on its feet. Diaz has not allowed a run in his past 16 games and picked up his 24th and perhaps largest save.

The Mets have won five of the eight games this season against the Braves, with four more to play this weekend before the final seven head-to-head battles in Atlanta.

Perhaps it’s best for the reinvigorated Mets that the Braves portion of the schedule was backloaded. The Mets are healthy, reloaded and rolling. Russia Is Sending 'People To Their Deaths' As...