Jacob deGrom was Mr. Untouchable for the first 17 batters he faced Sunday, before the laws of endurance caught up with him in his second major league start for the Mets in 13 months.

By that point, the Mets had a three-run lead and were on their way to completing a beat down of their NL East rivals with a 5-2 victory at Citi Field.

By winning four of five games in the series, the Mets issued a sizable blow to the Braves’ chances of winning a fifth straight NL East title. The Braves left town trailing by 6 ½ games in the division. The Braves still have seven games remaining against the Mets in Atlanta over two series, which might be their greatest source of hope in a race that is slipping from their grasp. 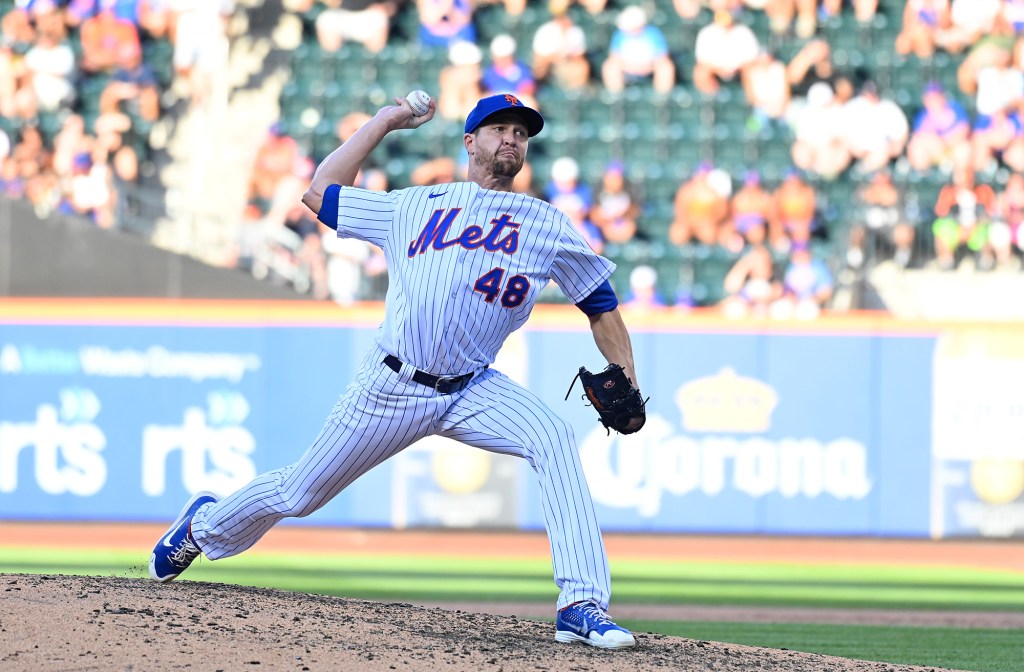 DeGrom, in his 200th career start and his first home start since July 7 of last season, was a machine into the sixth. Included was at least one strikeout of each batter in the Braves lineup. DeGron recorded 15 straight outs on 56 pitches, before he struck out Marcell Ozuna and Michael Harris II to begin the sixth, bringing his total to 12 strikeouts.

Adrianza’s walk and Swanson’s homer prompted manager Buck Showalter to retrieve the ball from deGrom, who left to a standing ovation. The Mets ace had started the day to rousing applause, entering to “Simple Man” by Lynyrd Skynyrd — a tune that had been shelved for over a year as deGrom recovered from various arm ailments and a stress reaction to his right scapula.

Swanson, before his homer, had struck out to begin the fourth inning. That strikeout was No. 1,518 in deGrom’s career — the most for a pitcher in 200 career starts.

Reliever Joely Rodriguez stepped up in maybe his top performance of the season for the Mets by pitching 2 ¹/₃ scoreless innings, with four strikeouts. Edwin Diaz struck out the side in the ninth for his 25th save as the Mets’ pitchers finished with 19 strikeouts.

Braves rookie starter Spencer Strider was knocked out in the third inning after allowing four earned runs on six hits with two walks. The Mets tortured the right-hander with patient at-bats that extended innings. 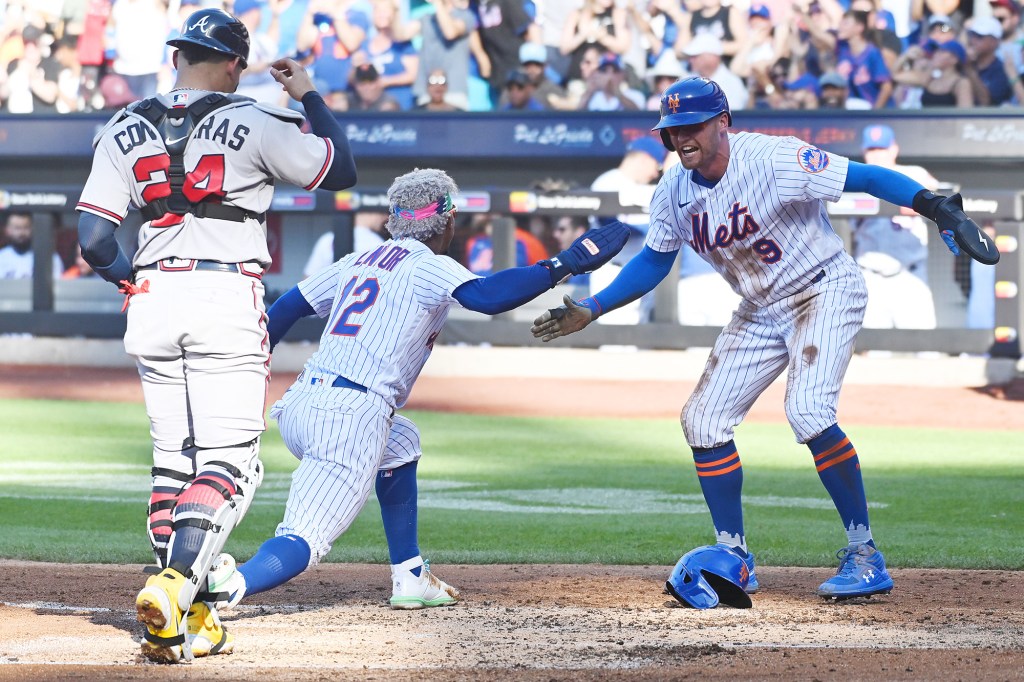 Francisco Lindor and Brandon Nimmo (r.) celebrate during the Mets’ win over the Braves on Sunday.Robert Sabo

Pete Alonso’s grounder off the third-base bag went for a two-run double in the third to give the Mets a 2-0 lead. Alonso, with the hit, gave him 97 RBIs, tied for the MLB lead with the Yankees’ Aaron Judge.

Daniel Vogelbach followed with a walk before Mark Canha stroked a two-run double that pushed the Braves into a 4-0 hole. The hefty Vogelbach’s rumble around the bases received extra cheers from the crowd. It was the third time this season Vogelbach has scored from first on a double.

Jeff McNeil stroked a double leading off the fifth and, after advancing to third on a fly out, scored on Collin McHugh’s wild pitch, giving the Mets their fifth run.

The Mets missed a scoring opportunity in the first inning when Brandon Nimmo was called out at second base on Starling Marte’s grounder. Adrianza tagged Nimmo without the ball in his glove before throwing to first, but Matt Olson alertly fired to second base, where the tag was applied before Nimmo reached the bag. After a lengthy review, it was ruled that Jeff Nelson’s initial out call didn’t stop Nimmo from running to the base and Nimmo was indeed out. Giants’ Brian Daboll expects ‘all our guys’ to...