The product of that swing, Baty’s first in the majors, was a ball that disappeared for a home run over the right-field fence at Truist Park, bringing with it a hope the Mets have a rookie who can contribute to this pennant race and beyond.

As debuts go, Baty crushed it. He became just the fifth player in franchise history to homer in his first major league at-bat, helping the Mets to a much-needed 9-7 victory over the Braves. 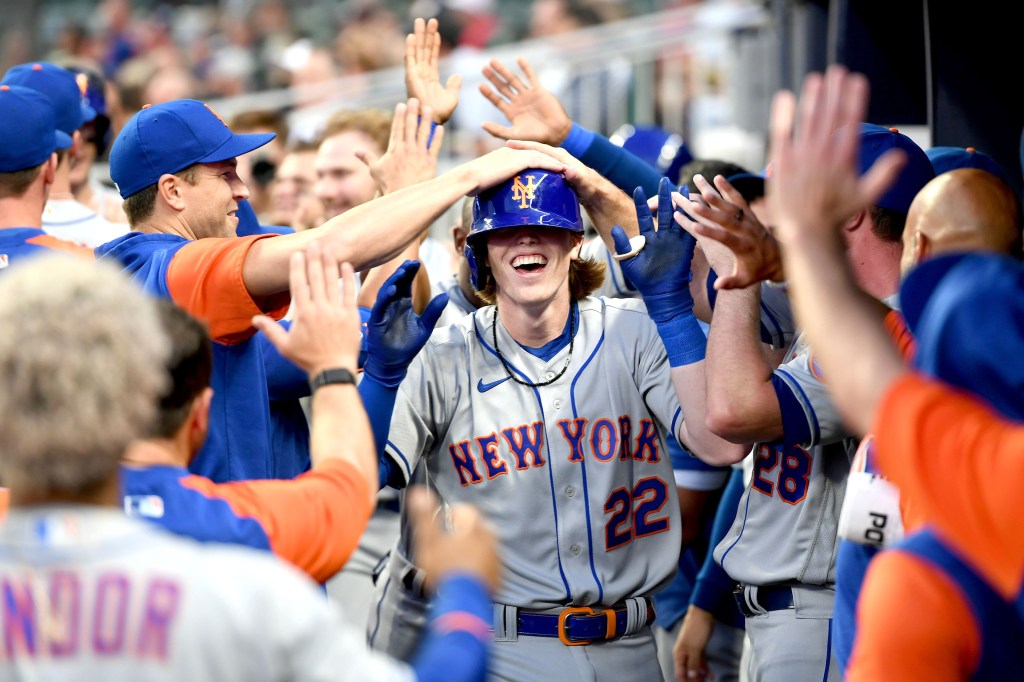 Brett Baty is mobbed by Mets teammate after hitting a homer in his first big-league at-bat in the Amazin’s 9-7 win over the Braves.Getty Images

After producing one run combined in losing the first two games of this series, the Mets homered four times Wednesday as they snapped their skid and moved 4 ½ games ahead of the Braves in the NL East.

Adam Ottavino surrendered a three-run homer to Robbie Grossman in the seventh inning that erased most of what had been a 6-1 Mets lead. Edwin Diaz and Trevor May combined to get the final six outs, though May surrendered two runs in the ninth.

The 22-year-old Baty, the organization’s No. 2 prospect, behind catcher Francisco Alvarez, was selected from Triple-A Syracuse before the game after Eduardo Escobar was placed on the injured list with a left oblique strain.

Batting eighth, Baty came to the plate for the first time in the second inning and took a pitch for a ball against Jake Odorizzi before jumping on a curveball for the homer. He joined Benny Ayala, Mike Fitzgerald, Kaz Matsui and Mike Jacobs as the only Mets to homer in their first major league at-bat.

In the sixth inning, Baty hit a shot that registered 113 mph off the bat against lefty Tyler Matzek, but it went for a fielder’s choice groundout. He finished the night 1-for-4.

“[The big leagues] wasn’t on my mind at all,” Baty said before the game. “I was just worried about winning games for Syracuse, but now I am here to win ball games for the New York Mets.” 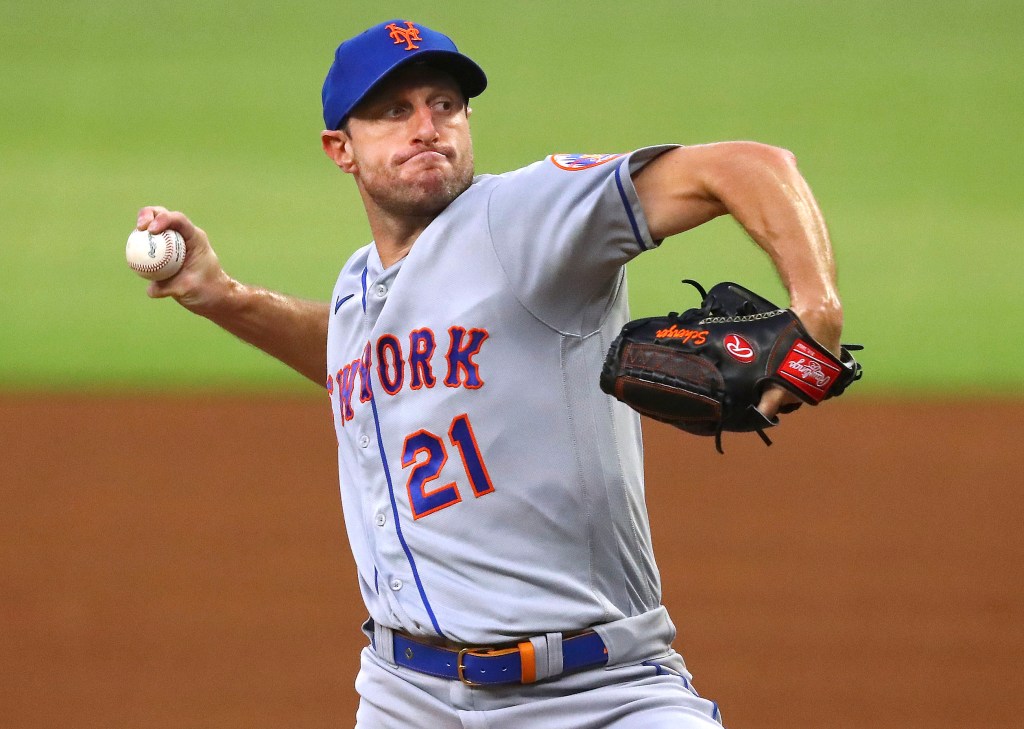 Max Scherzer allowed four runs but still picked up his ninth win of the season.AP

At the plate, Baty has made a concerted effort to get the ball airborne more often.

“I have always tried to hit the ball hard just all over the field,” Baty said. “I figured it was going to come soon enough and this year it kind of showed a little bit. I think I am just scratching the surface, though. I feel I can do a lot more for this ballclub.”

Max Scherzer lasted 6 ¹/₃ innings and allowed four earned runs on three hits with eight strikeouts and three walks for win No. 199 in his career. The right-hander retired 13 straight batters before walking Eddie Rosario in the seventh to start the rally that brought the Braves close.

But Scherzer incurred no such issues. After walking Grossman, he retired three straight batters, which included Dansby Swanson — whose shot to the center-field fence went for a sacrifice fly that pulled the Braves within 4-1. Brandon Nimmo hit the fence’s padding hard and grabbed for his right wrist, but remained in the game. 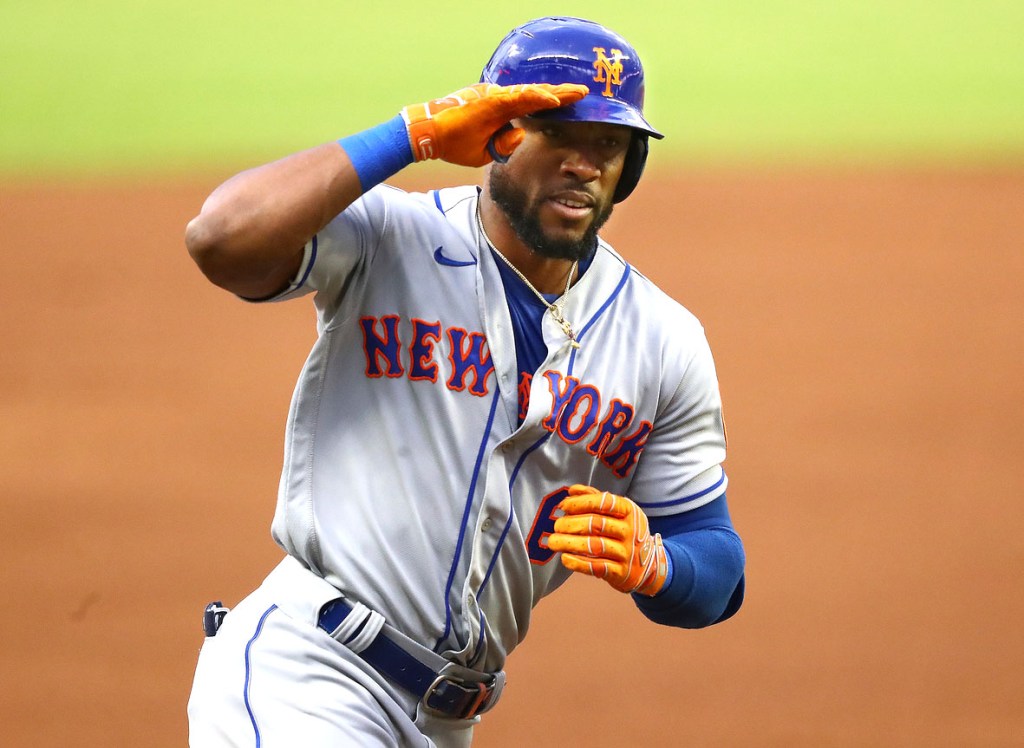 Starling Marte salutes after hitting the first of his two homers in the Mets’ victory.AP

Marte and Lindor hit consecutive homers in the first inning to give the Mets a 2-0 lead. Lindor’s homer was his 21st of the season.

Mark Canha doubled to lead off the second inning before Baty blasted the Mets’ third homer of the game.

Canha delivered an RBI double in the sixth that gave the Mets a 5-1 lead after Jeff McNeil’s leadoff single. Odorizzi was removed after allowing five earned runs on eight hits with two walks and two strikeouts over five-plus innings.

Marte’s second homer of the night, a solo blast in the seventh against Tyler Matzek, put the Braves in a 6-1 hole.

The Mets received insurance runs in the ninth on Pete Alonso’s two-run single and Daniel Vogelbach’s RBI double. Nimmo and Lindor each singled in the inning.

braves after brett homers first
Read The Rest at
nypost.com