The more Daniel Vogelbach learns, the less he swings.

In each season since 2017, the Mets’ newest slugger has swung at pitches less frequently than during the previous year. The better he understands the strike zone and the way pitchers want to throw to him, the more focused he has become on only swinging at offerings he can hurt.

The approach and its results helped entice the Mets, who acquired Vogelbach from the Pirates in July, and has made him a truly unique batter — one who uses his bat less often than anyone else.

Before the Mets’ 9-6 loss to the Braves at Citi Field on Friday, Vogelbach, who went 0-for-2 with a walk, had swung at 32.2 percent of the pitches he had seen this season. The mark was easily the lowest among major leaguers with at least 100 plate appearances and comes with good company: No. 2 was Juan Soto at 35.4 percent.

“That’s not my goal,” Vogelbach said about the odd batting title. “I just try to have a plan when I go to the plate and stick to my plan, whatever that plan may be. I try not to swing at what I didn’t want to swing at going up there.” 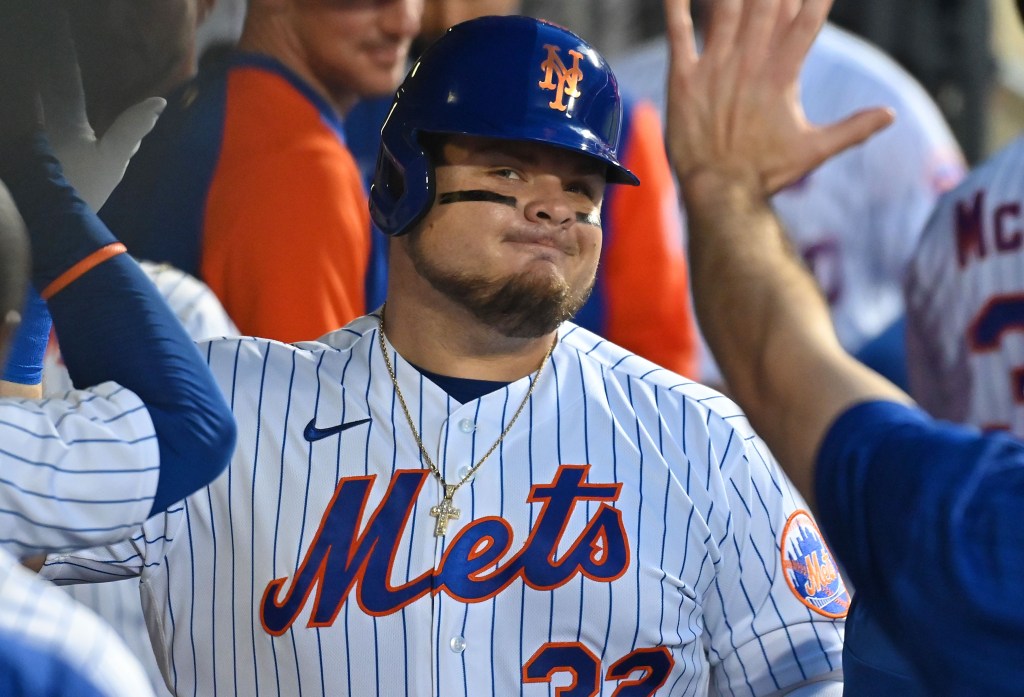 The 29-year-old is also among the league’s best at laying off balls, which helps explain the mindset: Vogelbach does not chase pitches often and tries to make the opposing pitcher enter the strike zone before he lifts the bat from his shoulder.

His home run Thursday off Atlanta righty Kyle Wright, came on the fourth pitch of the at-bat — and on the first time Vogelbach offered at a pitch.

The selectivity helps Vogelbach swing at the right pitches and leads him to reach base more often, having walked seven times in his first 10 games with the Mets.

“When you have that type of power and you have the ability to hit balls where they can’t catch them, you’d think that would lead to wanting to swing more,” manager Buck Showalter said of Vogelbach, who has been exactly what the Mets craved in a lefty-hitting designated hitter. “The discipline required not to do that is remarkable, and that’s why it’s a commodity that people want, including us.

It takes knowledge of opposing arsenals and being able to pick up quickly on pitches’ spins, knowing whether the ball will tumble out of the strike zone. It also takes a comfort level with getting deep into counts.

“I gotta be OK hitting with two strikes,” said Vogelbach, who had a respectable .593 OPS with two strikes this season. “Some guys, you don’t want to get to two strikes. Some guys are OK with it. It just depends on the type of pitcher and the pitches they have.”

Vogelbach has traded uniforms, going from a non-contender in Pittsburgh to a contender in Queens and suddenly is in the midst of a pennant chase.

But even in a new home park with a noticeable buzz, he hasn’t traded his approach, even if screaming fans might prompt others to be more aggressive.

“I’m lucky to be here,” Vogelbach said. “But when I was in Pittsburgh, it was the same thing — you’ve gotta bring it every single day.”