Mets’ bats wake up for thrilling extra-inning win over Reds On the verge of returning home with a series loss to the woeful Reds, manager Buck Showalter’s bunch showed a resiliency Wednesday night that was prominent earlier in the season, but had been lacking in recent weeks.

Dominic Smith, James McCann and Brandon Nimmo all delivered big hits in the 10th inning after Starling Marte tied it in the ninth, sending the Mets to an 8-3 victory at Great American Ball Park.

The Mets finished with two victories in three games in the series and maintained their 2 ½-game lead on the Braves in the NL East.

“To get to our end goal we’re going to need to win games like this,” Smith said. “It’s just a part of being a good team. It’s not always going to be pretty, but if we can find ways to win ballgames we’ll be where we want at the end of the year.” 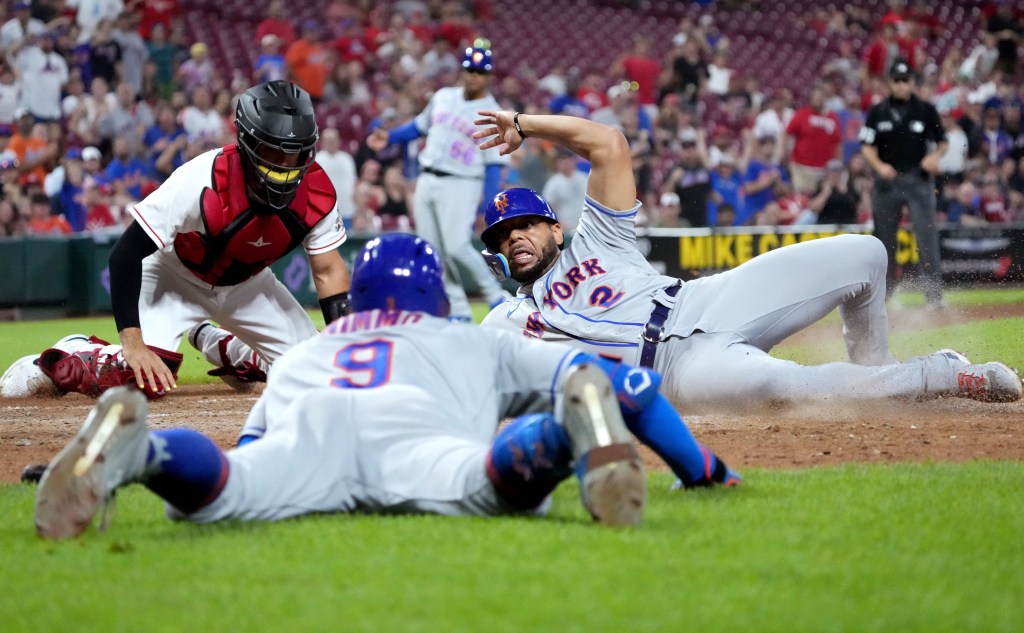 Dominic Smith slides safely into home to score a run past Aramis Garcia as Brandon Nimmo looks on during the Mets’ 8-3 comeback win over the Reds.Getty Images

Within two outs of losing in the ninth, the Mets rallied. Marte slapped a double over third base that scored Nimmo, whose single with one out had started the rally. Hunter Strickland had worked ahead 1-2 in the count before Marte delivered to tie it 3-3.

Francisco Lindor, standing in the on-deck circle, initially thought the Mets had received a gift on Marte’s double, which was not reviewable.

“I thought it was foul,” Lindor said of Marte’s chopper past Donovan Solano’s outstretched glove. “I asked the third-base umpire and he said it was right over the bag. The other team didn’t complain, so they must have gotten it right. Knowing their manager, [David Bell], he would have gotten tossed if he thought it was foul.”

In the 10th inning, Smith’s one-out double off Dauri Moreta scored automatic runner Ender Inciarte. McCann followed with a two-out single, sending Smith sliding across the plate with an insurance run. But the Mets weren’t finished: Nimmo crushed a shot into the right-field seats for his second three-run homer in the series.

“A very important win, even though, yeah, it’s against Cincinnati,” Nimmo said. “They made us fight and scratch and claw for everything we got this whole series. They might not have a great record, but they didn’t play like it when they were playing us.”

The offensive outburst was welcomed, a night after the Mets wasted a Max Scherzer gem and lost 1-0 on a sacrifice fly in the ninth inning.

The Mets have challenges ahead. A resurgent Marlins team is headed to Citi Field for four games before the Mets head to Atlanta for three dates, beginning Monday.

“We’re facing one of the hottest teams in baseball [Thursday],” Showalter said of the Marlins.

On this night the Mets received a big bullpen performance from Adonis Medina, Colin Holderman, Adam Ottavino and Edwin Diaz, who combined on 6 ¹/₃ scoreless innings behind David Peterson.

In his return from the paternity list, following the birth of a son, Peterson lasted only 3 ²/₃ innings, in which he allowed three earned runs on four hits and five walks with a hit batsman. 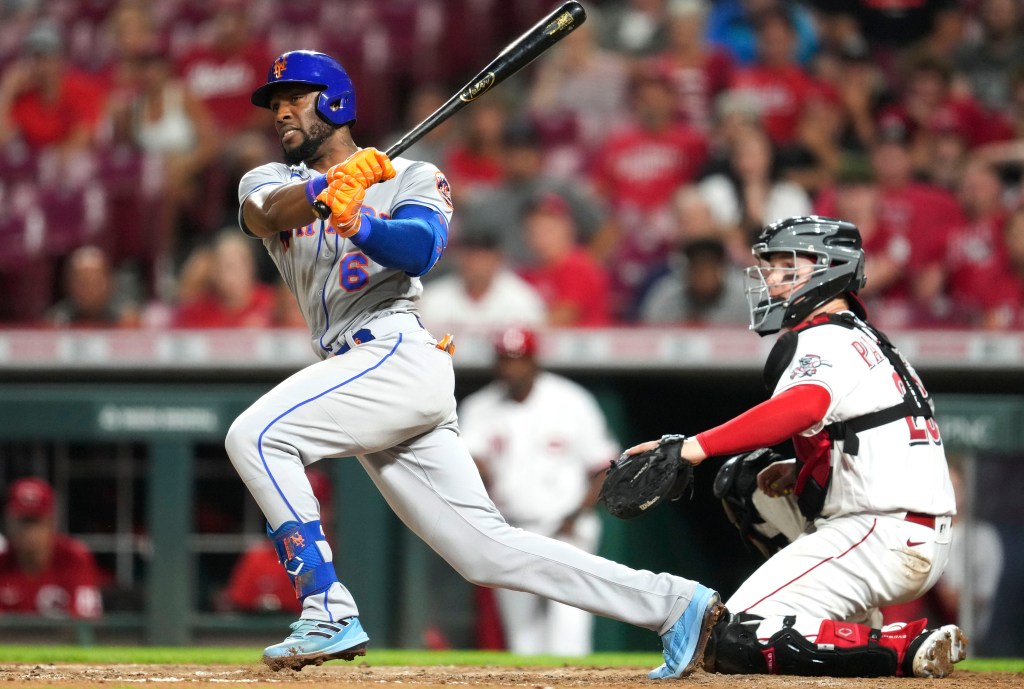 Starling Marte belts the game-tying RBI double in the ninth inning of the Mets’ comeback win over the Reds in 10 innings.AP

“I really wish I would have been able to go longer,” Peterson said. “But all credit to the guys in the bullpen.”

Nick Senzel’s two-run homer in the second placed the Mets in a 2-1 hole. Matt Reynolds walked before Senzel delivered his second homer in the series. The blast was the fourth allowed by Peterson in his last three starts, after he surrendered only three in his previous 10 appearances.

Kyle Farmer’s RBI double in the third extended the Reds’ lead to 3-1. Brandon Drury singled and stole second to begin the rally.

Senzel, Albert Almora Jr. and Michael Papierski — the bottom of the Reds order — walked against Peterson in the fourth. But the lefty caught a break when Senzel was picked off second base by Tomas Nido with Papierski at the plate. Medina replaced Peterson with two outs and struck out Drury to keep the Mets’ deficit at 3-2. Medina provided the Mets with three scoreless innings and struck out four.

Graham Ashcraft, the third straight rookie pitcher to start for the Reds in the series, surrendered an RBI single to Jeff McNeil in the first inning. Nimmo was hit by a pitch leading off the game and Pete Alonso singled with two outs, ahead of McNeil’s single. Nimmo’s plunking was the 50th of his career, tying him with Michael Conforto for the Mets’ all-time record.

The Mets pulled within 3-2 on Nido’s broken-bat RBI single in the fourth. Smith’s leadoff double had given the Mets their first extra-base hit of the game. 2 Cult-favorite sitcom ‘Community’ will return — as a movie...

3 The real Jeffrey Dahmer: What Ryan Murphy and Netflix get...