Massapequa has already made history, and its sights are set on more.

The players from the Massapequa Coast Little League captured the New York state title last weekend, the first state championship in the league’s 72-year history. Now, Massapequa is set to begin play Saturday in the Metro Regionals in Bristol, Conn., one last obstacle as they try to make a magical run to Williamsport, Pa., for the Little League World Series.

“There’s nothing more exciting than the idea of an 11- or 12-year-old fulfilling his or her little league baseball dream of getting to the Little League World Series,” Roland Clark, the team’s coach, told The Post on Thursday.

Added Alex Pagano, a pitcher and first baseman who leads the team in home runs: “It’s definitely really exciting. Making it to Williamsport, it would be huge because we would be the first Massapequa team to do it.”

The boys certainly have a legitimate shot at realizing that dream. Stiff competition awaits in the regional — representatives from New Jersey, Connecticut and Rhode Island are also vying for the coveted spot in Williamsport. In the double-elimination tournament, Massapequa will open against Toms River (N.J.) East, a perennial little league powerhouse.

Massapequa wouldn’t have it any other way.

“At the end of the day, we are the New York state champions and the teams that we’re going to be facing in the regionals are state champions as well,” Clark said. “It’s a champions tournament and anything can happen. The competition is going to be fierce. We’ll just try to keep a positive attitude and never quit our philosophy that the game isn’t over until the final out.

“That’s worked pretty well for us so far.”

Indeed it has, though the caveat is that Massapequa has rarely needed to clench and sweat all the way to the final out. In the state championship, its two single-elimination contests proved rather stress-free.

In the semifinal game against East Greenbush Castleton, Massapequa romped to a 10-0 mercy-rule victory. Then, in the finals against West Nyack Nanuet — which had previously beaten Massapequa in pool play — Massapequa exacted revenge via another mercy-rule win, 15-5.

So far in the tournament, Massapequa is 12-2. 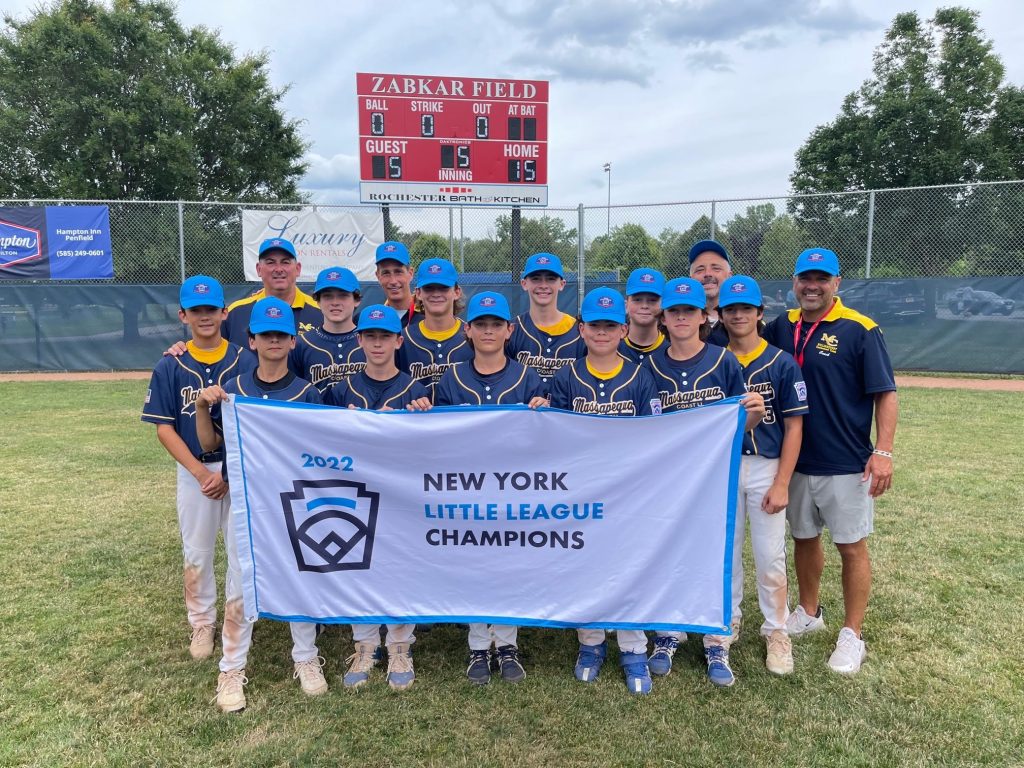 “It kinda sent the message that Massapequa would be a team to not forget about,” Clark said of his team’s triumphs.

Massapequa has parlayed that message into stellar on-field play. Not only did Massapequa hit the most home runs of any team in the state championship, but also it allowed the fewest runs.

“The great thing about my team, from the first guy to the 11th guy, is that everyone contributes,” Clark said. “Everyone has something special to offer. We don’t rely on one player. I think that’s what made the state tournament and this ride so far very special.”

Clark has experienced all of this before — the hoopla and fanfare from the Massapequa community, not to mention the mounting attention and the allure of realized dreams.

Thirty-three years later, he is at the helm for another magical run. Coming full circle, he said, is a “special moment.”

Yet he insists that the spotlight is rightfully on the kids. They weren’t the favorites to reach this point. That label was bestowed on South Shore Staten Island or Webster.

“It wasn’t an expectation,” Clark said. “This is a difficult tournament.”

Added Pagano: “We expected to make it far, but not this far.”

But with a trip to Williamsport looming, there’s only one New York team left standing, just one making a definitive statement: None other than the boys from Massapequa.

“They might not be enjoying their normal summer of going to the beach or being able to hang out with their friends everyday,” Clark said with a laugh. “But I think they’re very happy with the trade-off.”