Leonard Williams’ absence felt as Giants get gashed on the ground The Giants got two defensive starters back but desperately missed a third.

The outside linebacker duo of Azeez Ojulari (season debut) and rookie Kayvon Thibodeaux (NFL debut) returned quietly Monday during the Giants’ 23-16 loss to the Cowboys, but the value of defensive tackle Leonard Williams never was more obvious. The Giants turned to D.J. Davidson, Nick Williams and practice squad call-up Henry Mondreaux to fill the shoes of Williams, who missed a game due to injury (sprained MCL) for the first time in his 114-game-long career.

More help was needed. The Cowboys gashed the Giants for 6.4 yards per carry, 178 rushing yards and a rushing touchdown.

The pass rush wasn’t noticeably better with 2021 second-round pick Ojulari and 2022 first-round pick Thibodeaux than it was in the first two weeks with fill-ins Jihad Ward and Oshane Ximines playing on the edge. Dexter Lawrence also wasn’t as effective of an interior pass-rusher without Williams lined up next to him. 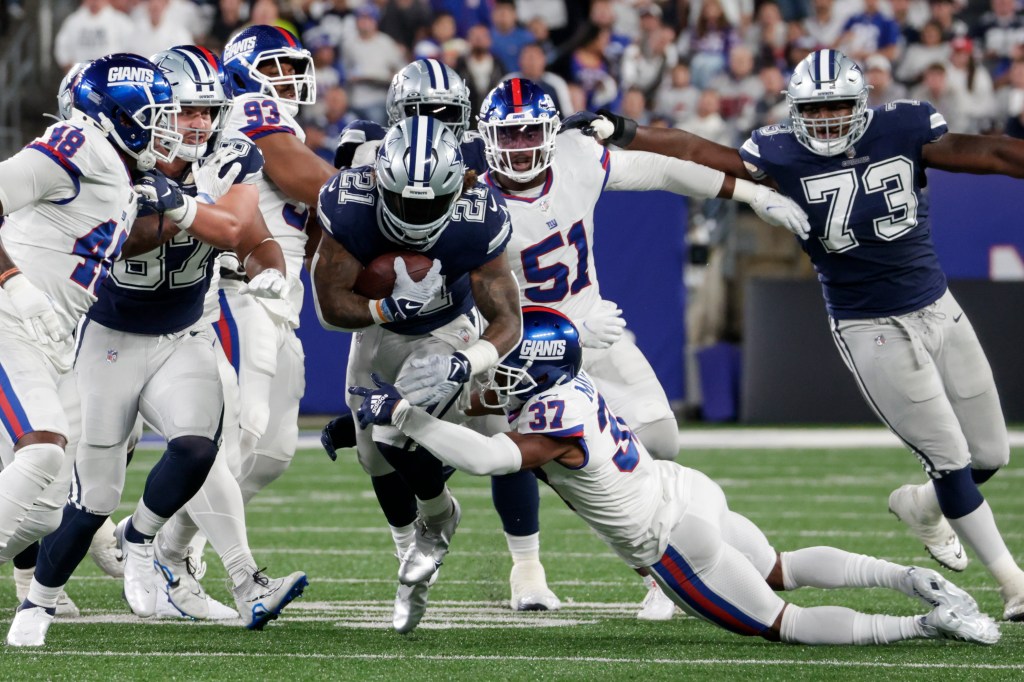 The Giants were dominated on the ground. Corey Sipkin for the NY POST

Ojulari forced a holding penalty, but neither promising youngster so much as breathed on Cooper Rush. They combined for two tackles and no quarterback hits, switching sides of the formation to see who might be more comfortable against a left side of the Cowboys’ line made up of rookie tackle Tyler Smith and future Hall of Famer Jason Peters in his first game of the season and first in years at guard.

The recovery timeline for a sprained MCL is generally thought to be about 2-4 weeks. Williams was injured on Sept. 18.

After his role was reduced to two snaps last week against the Panthers, Kenny Golladay saw an increase in playing time and eclipsed two snaps on the first drive.

But the $72 million free-agent signing wasn’t any more involved in the box score.

Golladay, who said last week that it is a “fact” he should play more, did not have a catch on three targets. A fourth-down pass to Golladay fell incomplete late in the first half and a third-down pass (short of the sticks) was dropped by Golladay as he tried to make a move before securing the ball midway through the fourth quarter.

The crowd booed Golladay’s drop. He has two catches for 22 yards this season and zero touchdowns in 17 career games with the Giants. That lack of production combined with his contract make a trade market almost non-existent no matter how much of his salary the Giants are willing to eat.

The Giants inducted seven members of a new class into their Ring of Honor at halftime. Four champions from Super Bowl XXI, Super Bowl XXV or both — DE Leonard Marshall and RBs Joe Morris, Ottis Anderson and Rodney Hampton — and two greats from decades ago — DB Jimmy Patton and HB/WR Kyle Rote — made up the former players. Senior vice president of medical services Ronnie Barnes, who has been with the team’s medical staff for 47 yards, was the other inductee. Radio broadcaster Bob Papa emceed the ceremony at midfield and was the only one to speak to the crowd. Each inductee received a blue jacket to signify the honor.

It marked the eighth game missed out of 20 in Toney’s enigmatic career.

The Giants elevated CB Fabian Moreau and Mondreaux from their practice squad before the game.

It was the second of three permitted elevations for Moreau, who played in a rotation with Cor’Dale Flott opposite Adoree’ Jackson. Mondreaux, who has two career sacks, made his Giants’ debut with Williams shelved. Safety Tony Jefferson, who was elevated for each of the first two games, was kept on the practice squad to buy more time before finding a spot on the active roster.