Expectations are all over the map for the Knicks, who stunned the NBA last season with a 41-31 record and finishing with the fourth seed in the East.

On one hand, the record could be viewed as inflated because of a fluky 72-game pandemic season that perfectly suited coach Tom Thibodeau’s hard-driving ways.

Thibodeau’s manic style in which every regular-season game is viewed as a playoff match may have driven up their won-loss ledger. The Knicks’ true colors, the naysayers believe, showed in the 4-1 playoff disaster against Atlanta.

In addition, the Knicks also gained confidence in an empty, sterile Garden devoid of boos and minus the electric atmosphere that often pumps up road teams.

In the NBA GM poll, not one of the other 29 teams’ executives gave the Knicks a vote to repeat in the fourth slot. Vegas sportsbooks put the Over/Under for Knicks wins at just 41.5 — in an 82-game schedule. And over the longer season, monstrous minutes allotted top players could backfire.

Even Jeff Van Gundy, one of Thibodeau’s best friends, cautioned the Knicks “could be easily a lower seed, a much lower seed, and be a better team because I think the East has improved.” 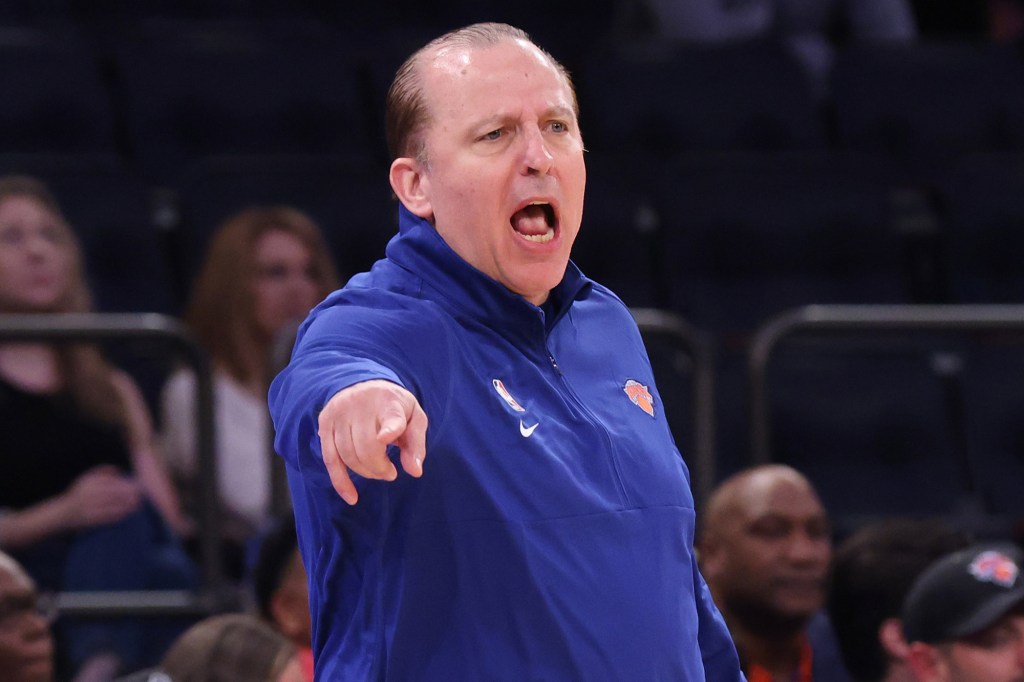 So the Knicks, after a modest offseason haul and a 4-0 preseason, get another chance to shock the NBA. Thibodeau’s team starts Wednesday, when it hosts the resurgent Celtics, who couldn’t get rid of Kemba Walker fast enough.

“I could care less,” Walker said about the GM poll. “Most of these GMs never played basketball. Let’s be real. Who cares what they think? We believe in ourselves. We’re going to play so hard every night, and that’s going to give us a chance to win every night. I could care less what a GM has to say.”

That remark could partly be directed at new Celtics GM Brad Stevens, whose first move was to dispatch Walker. But the Knicks have gotten used to the idea nobody thinks their fourth-place finish was legitimate.

As RJ Barrett said, “We just get disrespected all the time.” 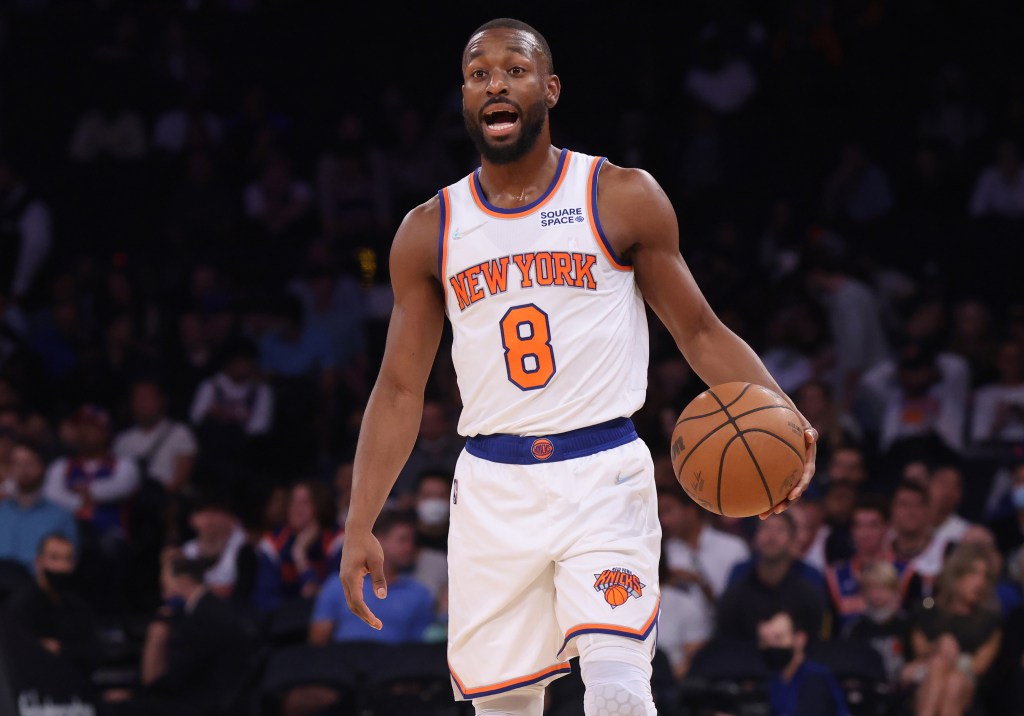 The Knicks hope a healthy Kemba Walker will have a big impact.Charles Wenzelberg/New York Post

After an offseason that netted a potentially over-the-hill Walker and never-an-All-Star Evan Fournier, the Knicks still don’t have the marquee roster that stirs the soul, and their defense could take a step back. But a large part of their nucleus is back.

Indeed, why break up a team that worked? The Knicks’ strength is depth, including a solid second unit orchestrated by rejuvenated point guard Derrick Rose. The addition of Walker as the starting point guard may work swimmingly because the 32-year-old with an arthritic left knee likely won’t be burdened with more than 20 minutes a game.

Rose said the Walker-Fournier backcourt tandem, which was last seen with the Celtics squad that was wiped out in the first round of the playoffs by the Nets, will “bring a flavor and swagger to the team.”

“The first group is the anchor of the team,” Rose said. “With us, it’s kind of easy to come in with the second group. We’re trying to give the game whatever it needs at the time. The scoring should be spread around.” 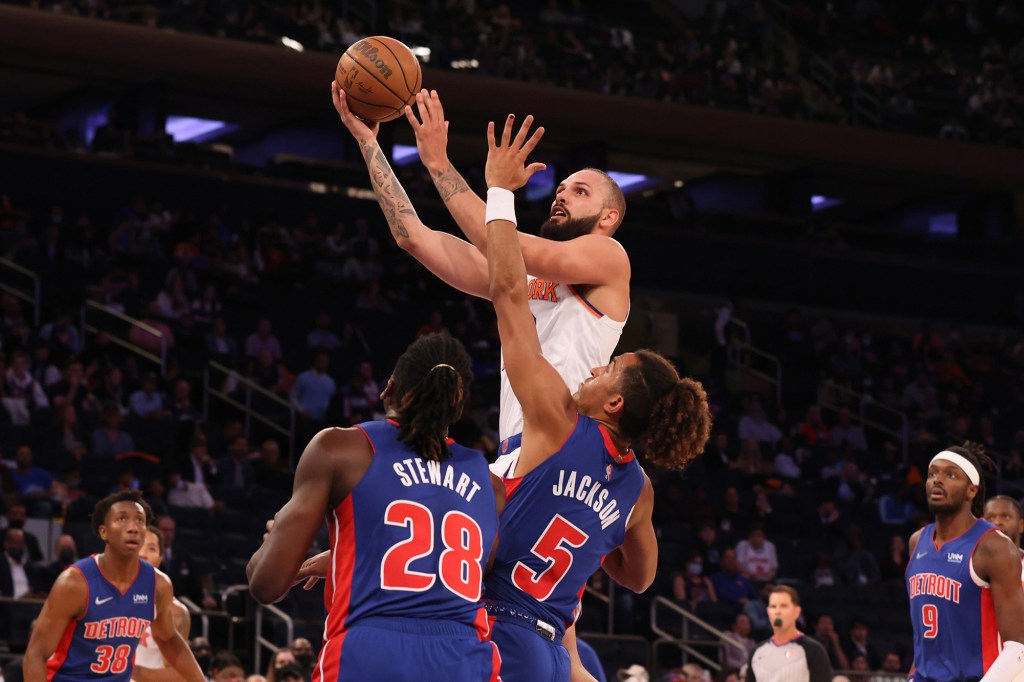 Knicks guard Evan Fournier drives to the basket during a preseason game against the Pistons.Charles Wenzelberg/New York Post

The key to whether the Knicks can hold their ground in the East may lie with Fournier, who was lavished with a four-year deal that could be worth $78 million. He had a below-average preseason offensively and still must show he can be as stout a defender as last season’s lockdown guy, Reggie Bullock. Fournier needs to help take the scoring load off All-Star power forward Julius Randle.

“Fournier brings something they need,” one NBA scout said. “I’m not a huge fan, but they needed someone to put the ball in the basket. They didn’t have enough. Fournier does that. … He’s averaged double-digit points — but on bad teams. If that’s your starter when you line him up on a lot of nights, you probably can argue the Knicks are not going to be the one with the advantage.”

The Knicks’ best asset is Thibodeau, and it’s hard to imagine his club falling any further than the 7-8 play-in game.

“You add Kemba and Fournier to a fourth seed and you’ve already regained some culture and identity, they’re still a playoff team,” the scout added.

Tom Thibodeau is the NBA’s best regular-season coach by far, so he doesn’t need superstars to win — just a team-first, defensive culture.