Knicks lose crusher in Kemba Walker’s return to fall below .500 Kemba Walker’s latest return to the Knicks’ lineup started quietly Tuesday night, but he and his teammates had the Garden rocking in the second half.

Another home game only resulted in more disappointment and heartbreak for the Knicks and their fans, however, as Julius Randle missed a late free throw and Alec Burks clanked a 3-pointer as time expired in a crushing 112-110 loss to the Timberwolves.

Walker had buried three monstrous 3-pointers earlier in the fourth quarter and netted 17 of his 19 points after halftime in his first appearance since Dec. 29 as the Knicks fought back from a 12-point deficit in the second half.

Evan Fournier connected on five 3s and finished with 27 points, Randle recorded 21 points with nine assists and RJ Barrett scored 17 for the Knicks, who couldn’t fully bounce back from Monday’s eyesore loss to the Hornets in slipping back under .500 at 22-23.

Anthony Edwards scored 21 points and Karl-Anthony Towns finished with 20 — including a go-ahead traditional three-point play with 29.3 seconds remaining — for the Timberwolves (22-22). 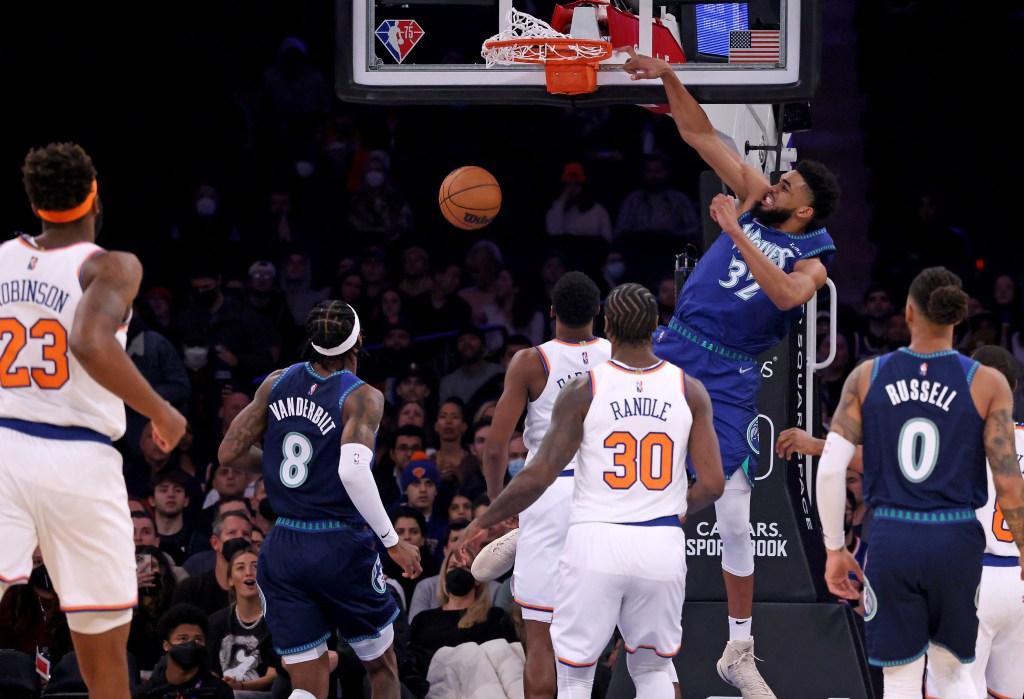 Karl-Anthony Towns slams one home during the Knicks’ 112-110 loss to the Timberwolves.N.Y. Post: Charles Wenzelberg

The Knicks trailed by as many as 12 points in the third quarter, but Randle sandwiched two jumpers in a 7-0 spurt to take a 98-93 lead early in the fourth. Walker rattled in a 3 from the right side, another from the top of the key and then drilled a third within two minutes of each other for a 107-102 game with 3:41 left on the clock.

The Timberwolves shaved the Knicks’ cushion to one in the closing minute, however, and after a Barrett turnover on a drive to the basket, Minnesota grabbed back a 111-109 lead on Towns’ drive and converted three-point play after he was fouled by Randle, who was forced to play center down the stretch after Mitchell Robinson and Taj Gibson both fouled out. 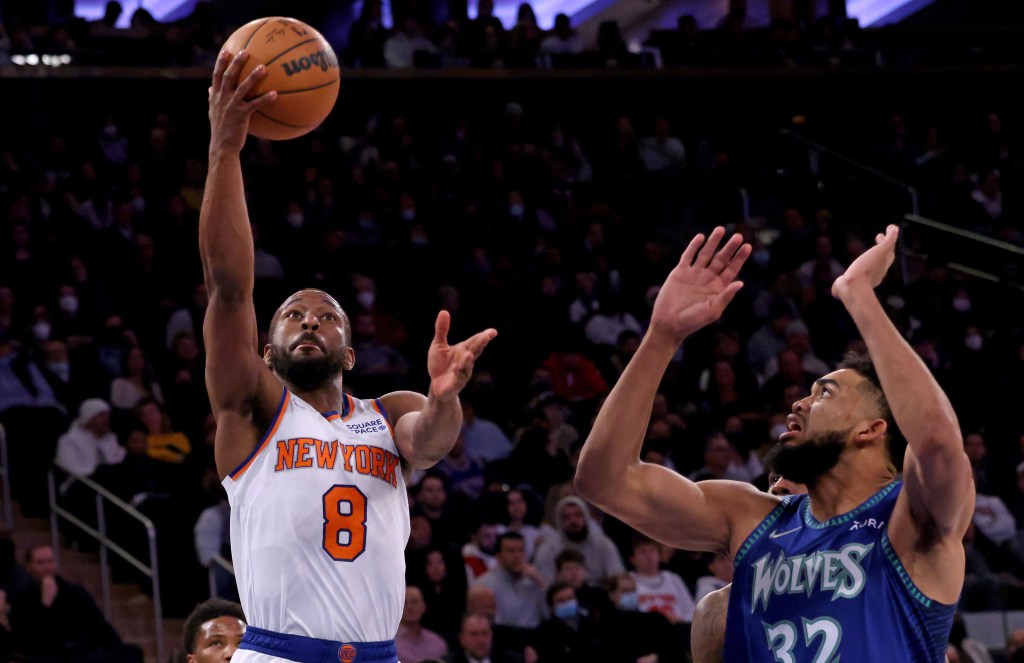 Kemba Walker, who scored 19 points in his return to the lineup, shoots a layup past Karl-Anthony Towns during the Knicks’ 112-110 loss to the Timberwolves.N.Y. Post: Charles Wenzelberg

Five seconds later, Randle missed the first of two free throws before Burks’ eventual heave at the buzzer bounced off the rim.

Walker was back in the starting lineup from his second nine-game respite this season, even though this shutdown was due to a sore left knee — unlike the benching that the Bronx native endured in December. He logged 30 minutes, shifting point-guard time away from Burks (17 minutes) and Immanuel Quickley (nine) after that duo mostly had shared those on-the-ball duties during the four-time All-Star’s absence, especially with Derrick Rose (ankle) also sidelined.

The Knicks also remained without imported wing Cam Reddish (ankle) for a third straight game since he was acquired last week from the Hawks. His additional availability eventually will result in a further glut of wing players for Tom Thibodeau to choose from, also including rookie Quentin Grimes.

Walker initially was pulled from the rotation at the end of November, but the former UConn star eventually returned during the team’s COVID woes to average 35.7 minutes and 19.3 points per game over six December games, including a 44-point performance against Washington and a triple-double on Christmas against Atlanta.

Walker drew a nice ovation after burying his first shot in the opening minutes of the game, but those represented his only two points of the first half. The Knicks missed seven of their first eight attempts from 3-point range and shot just 4-for-15 from long distance, while committing 13 turnovers through two quarters.

Edwards netted 16 and Towns had 11 as the Timberwolves carried a 61-51 lead into intermission. But Walker and Barrett knocked down triples to open the third and Fournier drained a couple from beyond the arc in the period as the Knicks stormed back to grab a 79-78 lead. Fournier also hounded Towns into a 24-second shot clock violation during that sequence.

Fournier’s third 3 of the third and a steal and drive by Grimes actually gave the Knicks a nine-point cushion with 1:50 to go in the period, but the Timberwolves rattled off the next 11 points bridging the final two quarters for a 93-91 lead with just under 10 minutes remaining in the fourth.