Kemba Walker finally is back from his second nine-game respite this season, even though this shutdown was due to a sore knee — unlike the benching the Bronx native endured in December.

Walker provided the necessary boost — especially in the second half, when he scored all but two of his 19 points — before the Knicks wilted in the final four minutes of a 112-110 loss Tuesday to Minnesota at the Garden.

“Felt good, it was good to be out there with my teammates. Trying to get a win. But yeah, felt really good,” Walker said after the game. “I just needed to rest, I was a little sore for a while. It was time, really. Yeah, I just wanted to feel good enough to get back on the court and tonight was the night.”

The 31-year-old former UConn star also was benched for nine games beginning in late November, before eventually returning during the team’s COVID woes to average 35.7 minutes and 19.3 points per game over six December games, including a 44-point performance against Washington and a triple-double on Christmas against Atlanta. 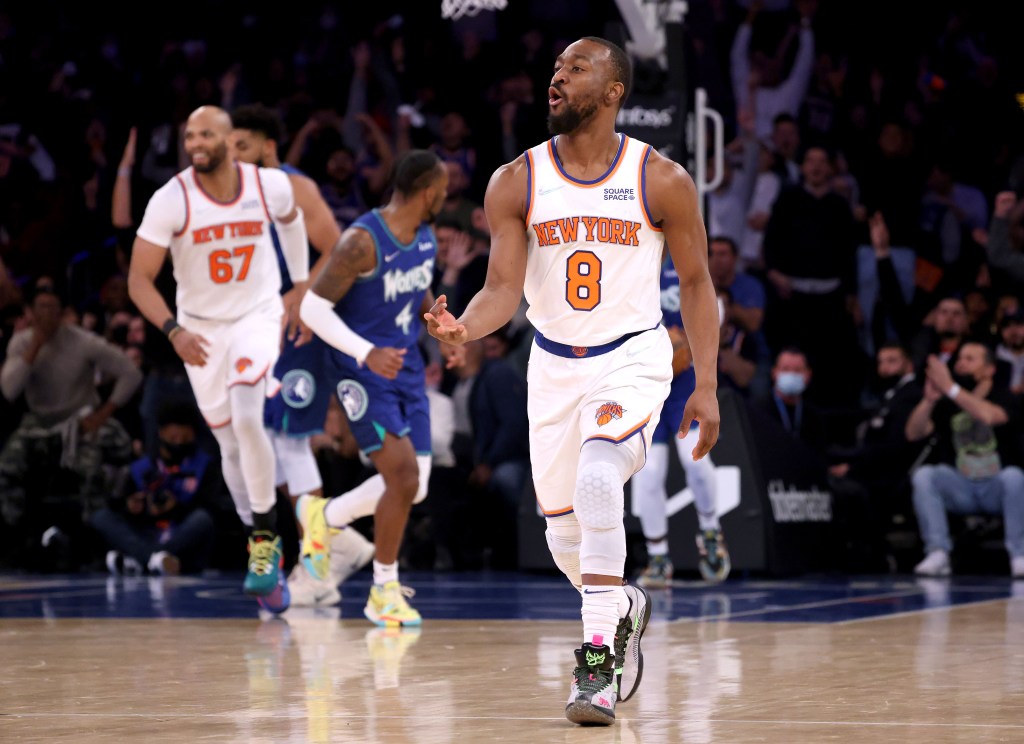 Kemba Walker celebrates after hitting a 3-pointer in the Knicks’ 112-110 loss to the Timberwolves.N.Y. Post: Charles Wenzelberg

One of the Knicks’ potential targets at the trade deadline went down this week with a troubling injury.

Pacers center Myles Turner, the NBA’s leading shot-blocker for a second consecutive season, suffered a stress reaction in his left foot, the team announced Tuesday. The 25-year-old center, who is owed $18 million for next season, will be reevaluated in two weeks, but he likely will be sidelined through the Feb. 10 trade deadline, according to reports.

The Pacers, who are 15-29 this season and looking to rebuild, reportedly have been open to dealing veteran players such as Turner, Caris LeVert, Domantas Sabonis and Malcolm Brogdon.

Nerlens Noel missed his third straight game with a sore left knee and recently acquired Cam Reddish also remained sidelined with an ankle issue. … The Knicks’ game in Sacramento on March 7 has been switched from a 10 p.m. (EST) start to 10:30 p.m. Indonesian Militant Jailed For 15 Years Over...