Judy Woodruff will step down as anchor of PBS NewsHour on Dec. 30 and will begin a two-year project on Americans political divisions and whether they can be healed.

In a statement, Woodruff said, “I have loved anchoring this extraordinary program, initially with my dear friend Gwen Ifill. To follow in the footsteps of Jim Lehrer and Robert MacNeil has been the honor of a lifetime. Now, I am thrilled to be embarking on this new project to try to understand the most divided time in American politics since I started reporting. I want to listen to the American people themselves, in cities, small towns and rural areas, from one end of the country to the other, to ask them about their hopes and fears, how they see their role as citizens, and to have long conversations with people who’ve given these questions careful thought.” 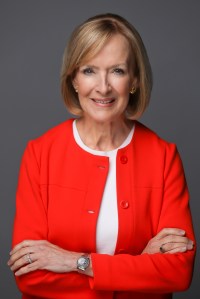 Woodruff previously announced plans to step down at the end of the year, with reports that Amna Nawaz and Geoff Bennett were expected to succeed her. No official announcement has been made, but NewsHour said that an announcement will be made late in 2022.

The new project will be called Judy Woodruff Presents: America at a Crossroads.

Sara Just, executive producer of NewsHour, called Woodruff “a legend and an icon. She continues to inspire with her commitment to fair, thorough journalism and her next project will bring all of her experience and skills to the most important story in our country – What is happening in America and can democracy survive?”

Woodruff, who also is managing editor of the newscast, has served as solo anchor of NewsHour since 2016, and co-anchored with Gwen Ifill from 2013 to 2016. Woodruff served as rotating anchor from 2009 to 2013.