PHILADELPHIA (AP) — Jimmy Butler knocked Joel Embiid out of the playoffs, then walked over to his former 76ers teammate for a hug and a message.

With another trip to the conference finals ahead, the Heat are happy to have him.

Butler scored 32 points and waved “bye bye” to the Philly crowd as he sent Miami into the Eastern Conference finals with a 99-90 victory over Philadelphia on Thursday night in Game 6.

The Heat will play the winner of the Milwaukee-Boston series. The defending champion Bucks lead that series 3-2, with Game 6 on Friday night in Milwaukee. 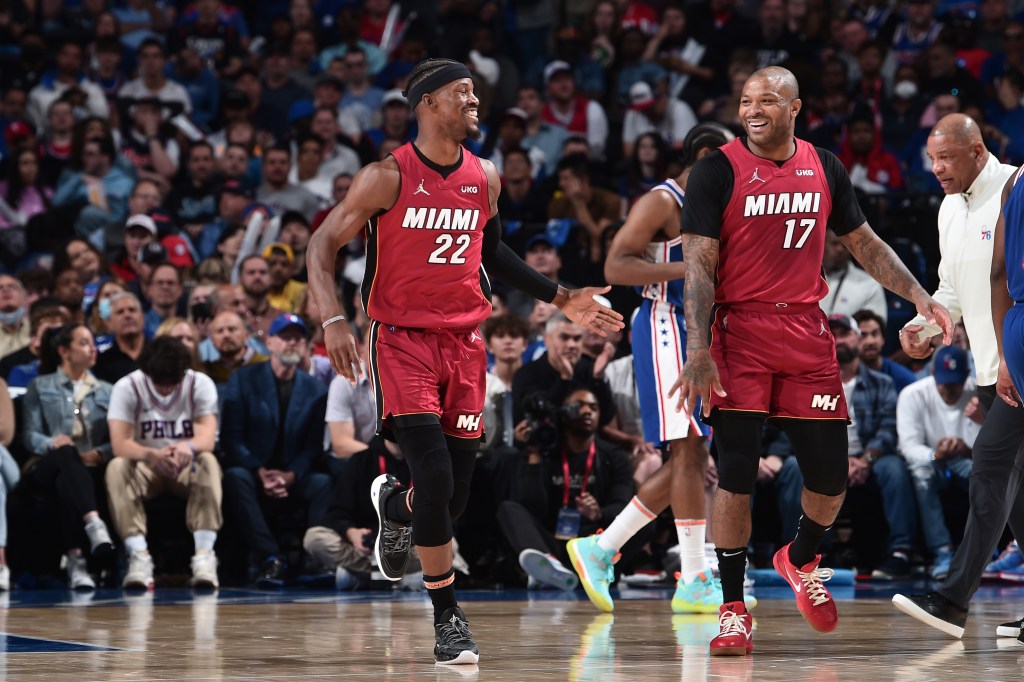 Jimmy Butler and the Heat eliminated the 76ers in six games.NBAE via Getty Images

The Heat reached the conference finals for the second time in three seasons, again with Butler leading the charge. Philly fans — and many inside the 76ers organization — still can’t believe the franchise let Butler get away after the 2019 season. He did not mess around and scored 14 points on 6-of-9 shooting in the third quarter when the Heat used a 16-2 run to take control. Butler scored 33 points in Game 3 and 40 in Game 4.

“I think he’s one of the ultimate competitors in this profession,” coach Erik Spoelstra said. “He was brilliant all series long. The challenges only get tougher here. He saw there was an opportunity to end this tonight and he wasn’t going to let this get to seven.”

Embiid, the NBA scoring champion, scored 20 points on 7-of-24 shooting.

Coming off a 35-point victory in Game 5, the Heat wore down a battered Sixers team. Embiid looked gassed as he gamely tried to carry the Sixers. He had little lift and had a pull-up jumper blocked by Bam Adebayo in the third. 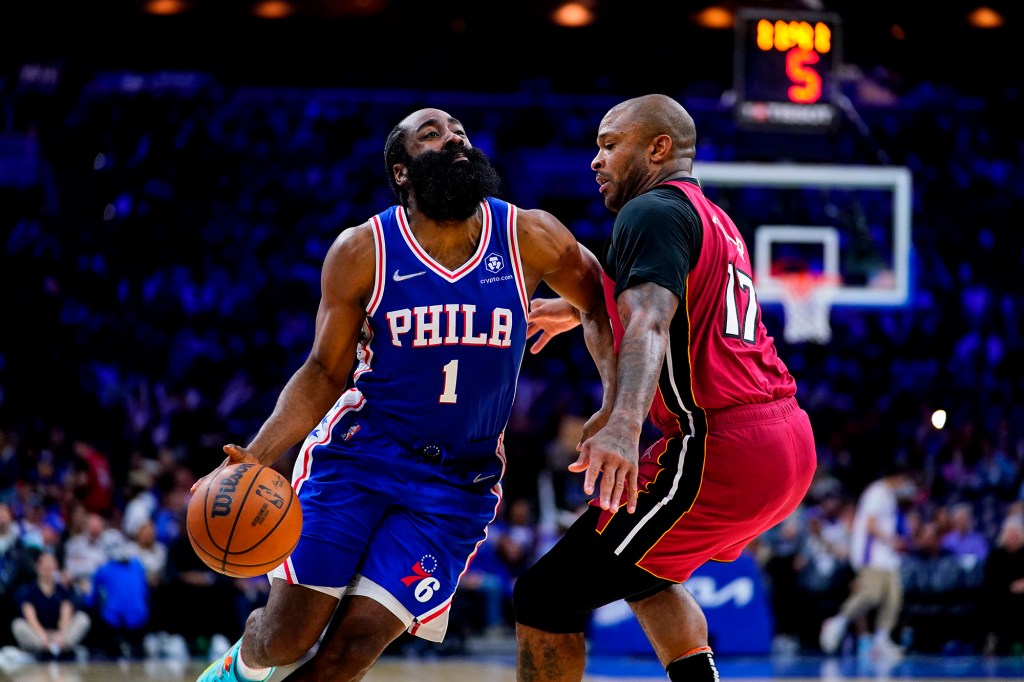 James Harden and the 76ers were eliminated from the playoffs by the Heat.AP

The Sixers parted with Butler in large part because they chose Ben Simmons over him. Simmons was unhappy and forced a trade this season to Brooklyn for James Harden. Harden, a three-time scoring champion, was supposed to shoulder the load with Embiid for a potent postseason push. Harden instead all but disappeared in the playoffs. He had a fantastic Game 4 at home against Miami but otherwise was a turnover machine. When he lost another ball that led to a Heat bucket and an 80-63 lead in the fourth, the Sixers were booed off the court.

“We tried to go for it right away,” Harden said. “We just came up a little short.”

Harden scored all of his 11 points in the first half. He had four turnovers and four baskets. Harden, who has a $47.4 million player option for 2022-23, missed both shots in the second half and scored his last basket at the 3:31 mark of the second quarter. 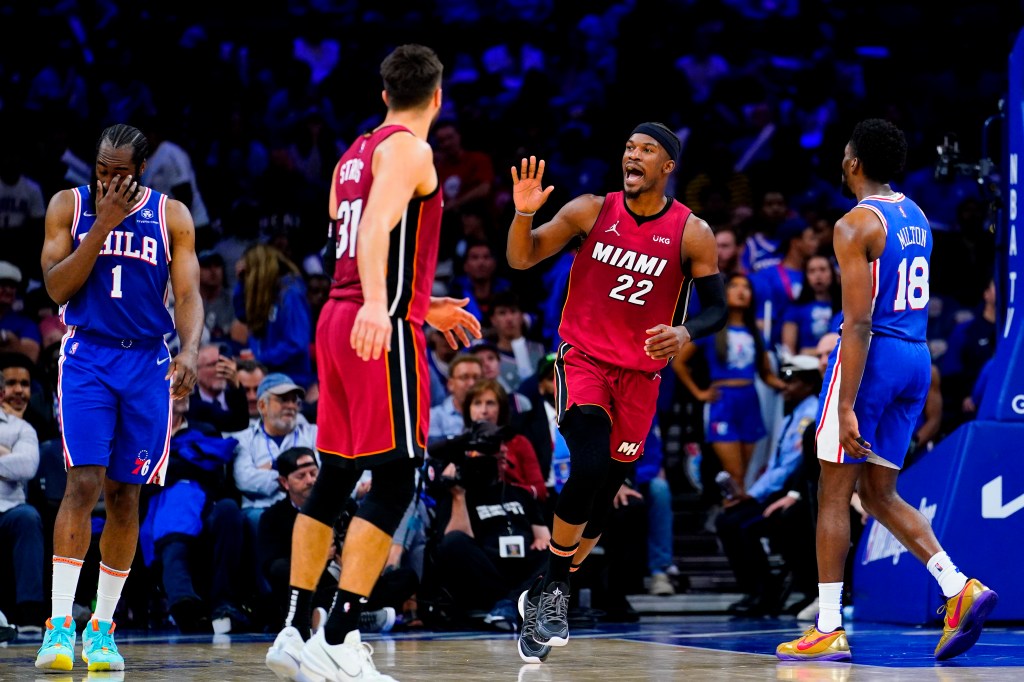 Few in Philly would give The Beard a passing grade. Harden said he would return next season.

Coach Doc Rivers implored his team to “fight for this!” in the huddle during the fourth. The 76ers just fell flat.

“I came to the conclusion at the end of this game that we were not good enough to beat Miami,” Rivers said.

Rivers is signed through the 2024-25 season and another early exit — the 76ers were the No. 1 seed last year and lost in the second round — and his job status is a hot topic of conversation.

“I don’t worry about my job. I think I do a terrific job. If you don’t, then you should write it,” Rivers said. “Because I worked my butt off to get this team here. When I first got here, no one picked us to be anywhere. Again this year, the same thing. If that’s how anyone feels, write it. I’m going to feel secure about it.” 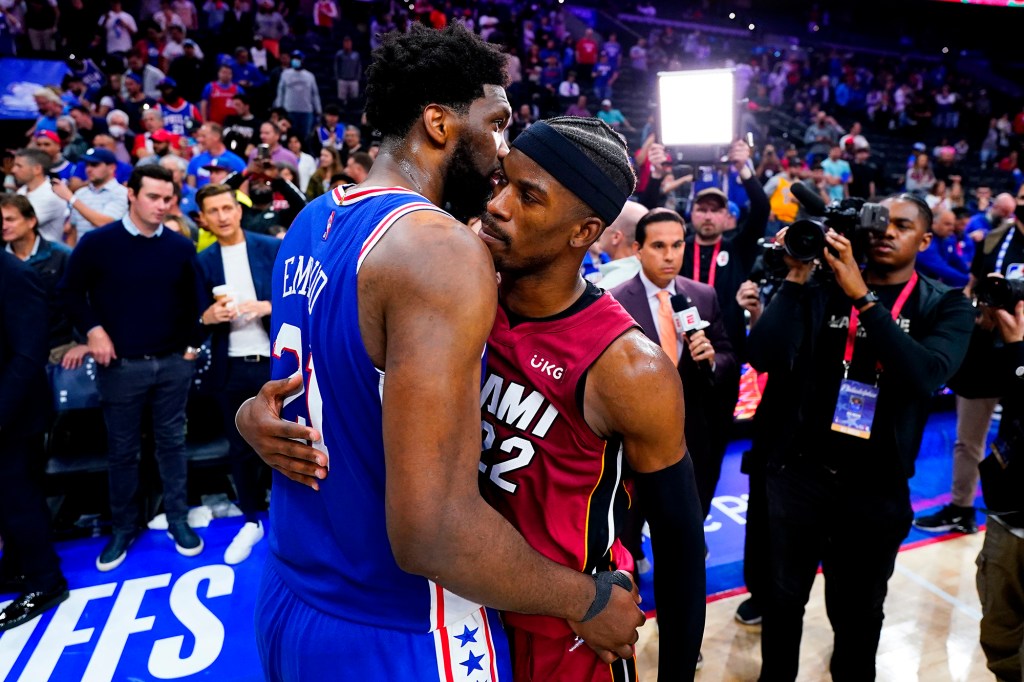 Max Strus had 20 points and 11 rebounds for the Heat. Even another abysmal night from 3-point range — Miami missed 21 of 28 attempts —- failed to matter.

Embiid again gutted out a postseason game in his mask (right orbital fracture) and with torn ligaments in his right thumb after he was only cleared to return last week from a concussion. He held the back of his head after he knocked it on the court after a fall late in the second quarter. Embiid still played 22 minutes in the first half and scored 14 points.

Embiid missed the first two games of the series as he recovered from the concussion. The Sixers lost both games in Miami. Would a healthy Embiid have made a difference? Maybe not but it’s still another sudden end to the All-Star cornerstone who has yet to taste a conference final. I have a split tongue — and can taste two...

7 Alec Baldwin mocked for yelling at staffer in Spanish:...