Grading the Jets’ 31-10 home win over the Bears on Sunday.

The Mike White Express was rolling Sunday. The Jets rolled up a season-high 466 yards behind White (22 of 28, 315 yards, 3 TDs, 149.3 QB rating), who played a nearly flawless game. White connected with 10 different receivers, led by Garrett Wilson, who had five catches for 95 yards and two touchdowns. Elijah Moore (2 catches, 64 yards, 1 TD) found the end zone for the first time this season. The offensive line was great, opening holes in the running game (158 rushing yards) and allowing just one sack.

There were some early hiccups and some missed tackles, but then the defense settled in. They sacked Trevor Siemian twice and Siemian (14 of 25, 179 yards, 1 TD, 1 INT, 75.2 rating) did nothing in the second half. The Bears had 127 rushing yards and David Montgomery (14 rushes, 79 yards, 3 catches, 34 yards) had a good day, but the Jets shut out the Bears in the second half. LB C.J. Mosley had a team-high 10 tackles and sealed the game with a late interception. 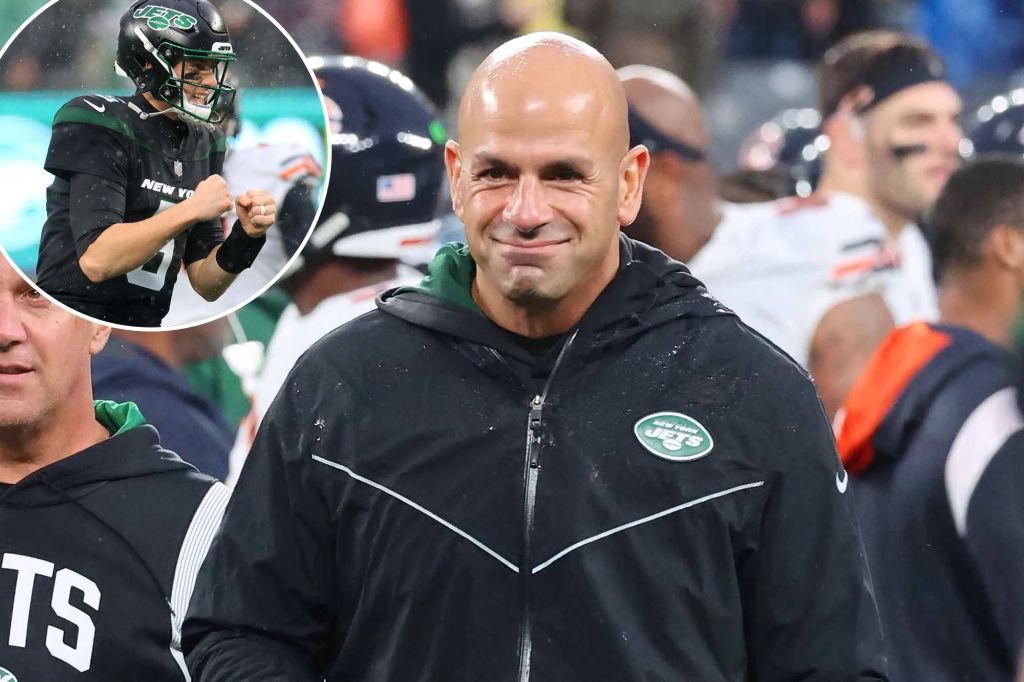 Jets coach Robert Saleh is all smiles after Mike White (inset) led the Jets to a win on Sunday.Robert Sabo, Getty Images

This group had an up-and-down day as it tried to bounce back from the end-of-game disaster in New England. Greg Zuerlein was 1 of 2 in field-goal tries, making a 57-yarder, tying the franchise record and missing one from 53. Punter Braden Mann botched a hold on another field-goal attempt, but pinned the Bears at the 1-yard line on one of his punts. Braxton Berrios had a 22-yard punt return.

This was a tricky week for Robert Saleh after the mess against the Patriots and he handled it well. His decision to go to White looked brilliant on Sunday as the offense came to life. We’ll find out in the coming weeks if that offensive brilliance was due to a terrible Bears defense or an actual spark for the Jets’ offense. Offensive coordinator Mike LaFleur called a nice game for the most part and gave White some easy throws to make. He also stuck with the running game and got things going there in the second half. Defensive coordinator Jeff Ulbrich weathered an early storm and his unit did what it was supposed to against another backup quarterback.