Jets can move into first if they finally can upend Patriots FOXBOROUGH, Mass. — From worst to first?

The Jets will, with a win over the Patriots on Sunday, move into first place in the rugged AFC East, a position they have not been in this late in the season since 2010. The Jets (6-3) are a half-game behind the Dolphins (7-3), who have a bye this week, while the Bills (6-3) are slated to play the Browns. If the Jets can beat the Patriots (5-4), they will move into first place because they own the head-to-head tiebreaker over Miami and Buffalo.

“We think about it,” left tackle Duane Brown said. “We don’t talk about it as much. We try to take it as another game, another opportunity to try to go out and win, but everyone in the building has an understanding of what’s on the line, the implications behind this game.”

The Jets said this week they are not getting too carried away over possibly being in first place. But after finishing as the division doormat in recent years, that would be a huge step for the young Jets. 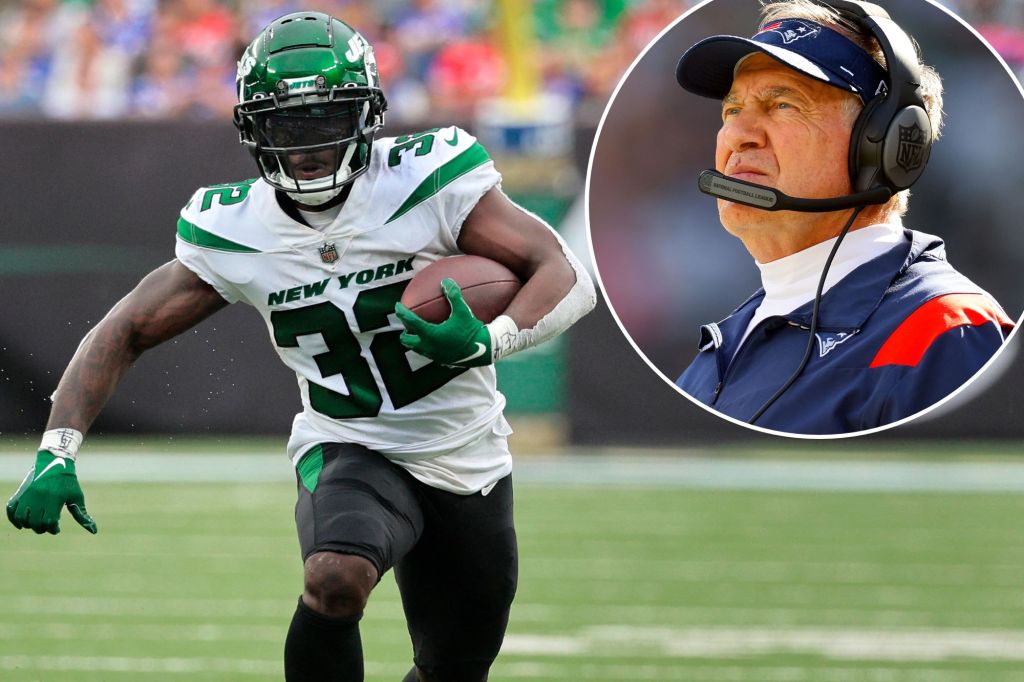 Michael Carter and the Jets will move into first place in the AFC East if they can beat Bill Belichick’s Patriots in Week 11. N.Y. Post: Charles Wenzelberg; Getty Images

“It’s about who finishes first, not about Week 10 who is in first place,” running back Michael Carter said. “But it’s cool, short term.”

The AFC East is up for grabs entering Thanksgiving, a rarity in a division that has been dominated by New England for the last two decades. All four teams in the division have winning records. It is just the fifth time since 2002 that has happened in the NFL.

The Patriots moved above .500 before their bye week, and while they are in last place at the moment, the Jets know how dangerous New England is. The Patriots ended the Jets’ four-game winning streak last month with a 22-17 win at MetLife Stadium.

That was the Patriots’ 13th straight win over the Jets, dating to 2015. A win on Sunday would give New England the longest active winning streak in the NFL over an opponent, breaking a tie with the Chiefs, who have beaten the Broncos 13 straight times.

“I think everybody in the AFC sees the Patriots as a team they have to go through, whether they have Tom Brady back there or Mac Jones or whoever is on their roster,” Jets center Connor McGovern said. “No matter who’s on their roster, they’re a tough team to beat.” How To Watch The World Cup: TV Schedule,...