Kevin Durant missed his first game of the season Friday with a sprained right shoulder. And the Nets found a way to grind out a workmanlike win without him.

The Nets clawed back from a huge deficit for a 115-113 come-from-behind victory over Orlando before 16,966 at Barclays Center.

Durant has been favoring the shoulder since Monday Nov. 8, first injuring it in the Nets’ loss in Chicago. With the Nets playing host to the last-place team in the Eastern Conference on Friday — and not playing again until Monday in Cleveland — they stole a chance to rest Durant. And they stole a win without him.

“I just think it’s just been bugging him a little bit and finding a time for him to rest is difficult,” coach Steve Nash said. “So coming out of a back-to-back, the shoulder lingering a little and him having a four-day break here in a sense for the shoulder is just an opportunity we thought was positive four us.

“Unfortunately, for [one night], it hurts the team, but in the long run, it could help us. Those are the decisions you have to make.” 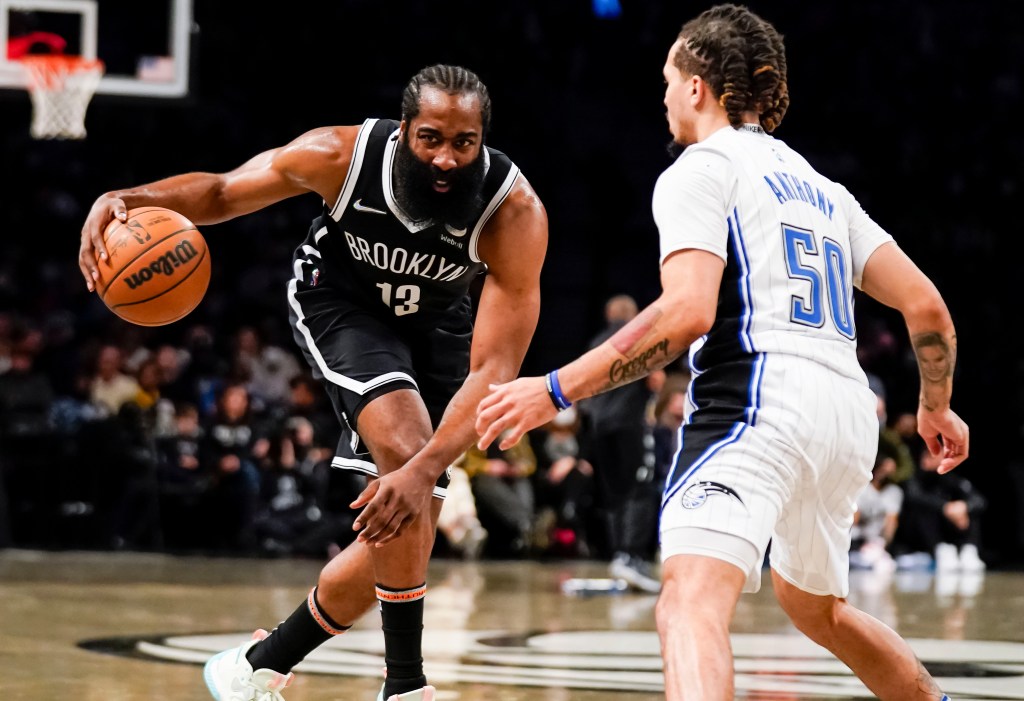 James Harden, who scored a game-high 36 points, looks to make a move on Cole Anthony during the Nets’ 115-113 win over the Magic.Corey Sipkin

The Nets stormed back from a 19-point second-quarter deficit, mounting an extended 44-17 run that spanned intermission and flipped the game.

James Harden had a game-high 36 points, 10 rebounds and eight assists, going 19 of 20 from the free throw line. Patty Mills added 22 points, and LaMarcus Aldridge scored 11 of his 15 points during the final eight minutes.

The Nets (12-5) have now won 10 of their last 12 games and moved a half-game ahead of Miami atop the Eastern Conference. And they fully expect to get Durant back Monday vs. the Cavs.

“We don’t feel concerned that it’ll linger or that he’d miss the next game,” Nash said.

“It’s just a pocket in the season where it’s not like he sits tonight and plays tomorrow or Sunday. He actually gets a few days rest on top of rest of the shoulder, and so there was multiple factors that I think made it attractive for us to choose this game for him to sit.”

The second-half defense made sure it didn’t hurt them too much.

Jalen Suggs (21 points) had every Orlando point in a 7-2 run right out of the gate. Between his scoring and Mo Bamba’s defense — blocking and altering shots at the rim, and even stepping out to guard Harden on the perimeter — the Nets trailed, 41-25, after the first quarter.

And it actually got worse before it got better

The Nets surrendered eight straight points to fall behind, 58-39.

It was still 62-43 after R.J. Hampton’s 3-pointer with 3:33 to play in the half. But that’s when the Nets finally dug in on defense, reeling off 10 unanswered points to get back into the game.

After Harden lured Suggs into an ill-advised foul out on the perimeter with eight seconds left in the half, he sank all three free throws to send the Nets into the locker room within single digits. They kept that momentum coming back out.

After having allowed 56.4 percent shooting in the first half — picked apart for 16 assists on 22 buckets — the Nets finally found their footing defensively.

A Harden 3-pointer pulled the Nets within 64-58. And after Cole Anthony missed a contested dunk — DeAndre’ Bembry coming over to make the Orlando guard feel him — Anthony protested and got hit with a technical.

Harden’s technical free throw made it 70-67, and Mills’ 3-pointer on the ensuing trip upcourt knotted the game. Another Mills 3 off a dribble handoff from James Johnson untied it, giving the Nets their first lead since 2-0.

The Nets saw Orlando briefly retake the lead at 101-99 on Anthony’s pull-up. But a LaMarcus Aldridge and-one put the Nets back ahead, and his offensive rebound and turnaround hook shot made it 104-101 with 5:35 remaining.

The Nets led 112-109, when Terrence Ross made just one of two free throws. But Harden hit two at the other end for a four-point edge with 9.2 seconds left. Tesla Drivers Back Behind Wheel After Server...