It Starts On The Page: Read A Season 4 Script For ‘The Marvelous Mrs. Maisel’ Amy Sherman-Palladino was inspired to create The Marvelous Mrs. Maisel by childhood memories of her stand-up comedian father and admiration for early female comics. Her pilot script ended up becoming one of Amazon Prime Video’s most successful series to date: Over the past three seasons, the series has scored 54 Emmy nominations and 20 wins including one for Outstanding Comedy Series for its debut season.

The third episode of Season 4, “Everything is Bellmore,” is the latest installment of It Starts on the Page, Deadline’s annual series that highlights the scripts that serve as the creative backbones of the buzzy shows that will define the TV awards season. The scripts in our series are all being submitted for Emmy Awards consideration this year and have been selected by Deadline using criteria that includes critical acclaim, selecting from a wide range of networks and platforms and a mix of established and lesser-known shows.

Maisel follows Miriam “Midge” Maisel (Rachel Brosnahan), a young mother of two whose husband has left her for his secretary. In a drunken stupor, she stumbles onstage of The Gaslight and realizes she has a knack for stand-up comedy. The fourth season takes place after Midge has been fired and struggles to restart her comedy career.

“Everything is Bellmore,” written by Sherman-Palladino and Daniel Palladino, begins with Midge performing as the Wolford’s comic emcee. She tries to speak with Clifford (Peter Gerety) about making some changes, but he falls asleep while she’s speaking. Midge’s manager Susie (Alex Borstein) comes to talk with her, but is interrupted by devastating news about Jackie (Brian Tarantina). 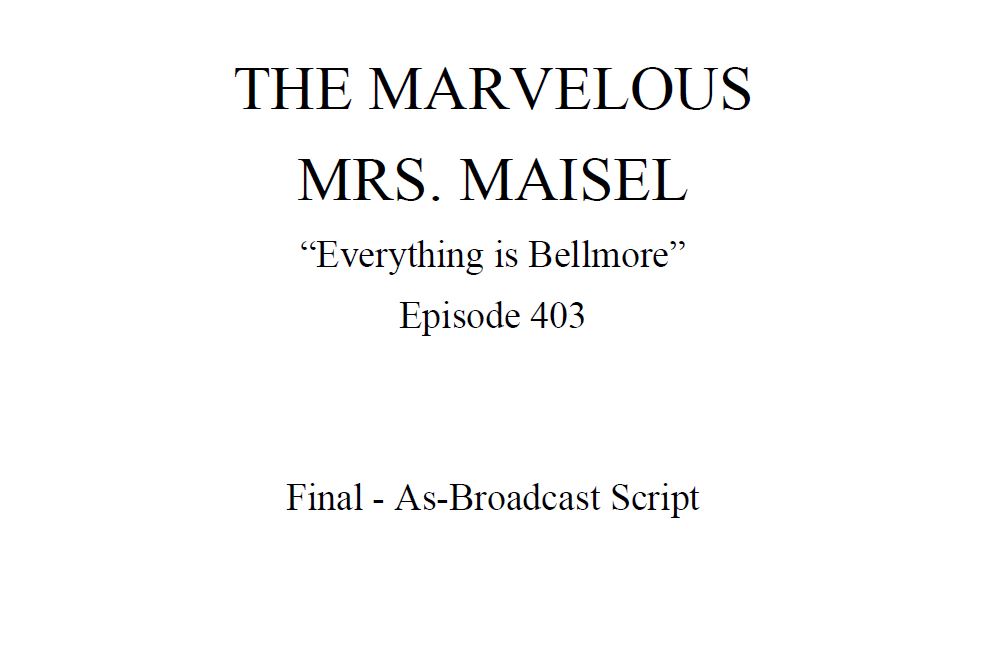 More from this Story Arc

It Starts On The Page ‘Snowpiercer’ To End With Season 4 On TNT